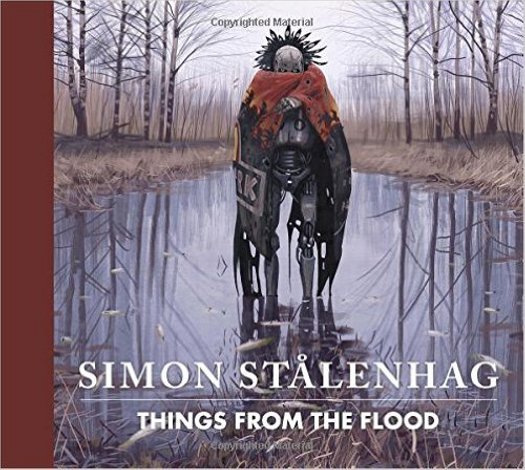 In the first part of this Gift Guide for fans of science fiction, fantasy, and horror, we covered lots of great suggestions for the bookworm on your holiday shopping list.  This time around, we offer gift suggestions for lovers of visual media, like art books, film, television, and comics.

For the visually oriented giftee on your list, art books may be the way to go. Your first stop should be Spectrum 23: The Best in Contemporary Fantastic Art edited by John Fleskes. The latest in this annual series, as always, showcases the best contemporary speculative work from artists all over the world working in various media. It's a full-color coffee table book that will be picked up again and again. There's also Things from the Flood by Simon Stålenhag, a disturbing art book that paints a desolate future. The pictures and prose of this book relay the memories of a Nordic childhood infused with strange machines and weird creatures from other dimensions. The fusion of everyday country landscapes and alien ships and robots is slightly off-putting, but in a good way. On the weirder/horror side of the artistic continuum, there's The Singing Bones by Shaun Tan. Think of this as a portable art sculpture gallery that offers close-up photographic interpretations of the fairy tales you only think you knew.

Maybe your art-loving giftee is a movie lover, in which case there are several more ideas for you to consider. Star Wars fans have a whole slew of gifts that would make them think they were the target of Jedi mind tricks. The big-ticket item is Star Wars Art: Ralph McQuarrie, a gorgeous collection of conceptual drawings from back before anyone knew what Star Wars was or would become.  Lavish doesn't even begin to describe this 800-page treasure. There's also Pablo Hidalgo's Star Wars Propaganda: A History of Persuasive Art in the Galaxy, a perfect gift for the Star Wars fan. Hidalgo, a creative executive for story development at Lucasfilm, has compiled a terrific collection of fifty propaganda posters to convince citizens of the galaxy far, far away that the Empire is good or bad, depending on who is doing the persuading. This luxurious 100+ page book, complete with lots of explanation text, comes in a sturdy slipcase and contains 10 propaganda posters as an added bonus.  Star Wars: Complete Locations should also be on your radar if you're looking for Star Wars-related gifts. It's packed with dozens of full-color, intricate cross-section artwork and maps, all of which immerse you in the cinematic universe of Star Wars.  If your Star Wars fan is excited about the new film Rogue One – and they should be! – then they'll love the mouth-watering illustrations in The Art of Rogue One: A Star Wars Story by Josh Kushins.

Not a recent film, but no less fun for modern audiences, is Labyrinth, the 1986 Jim Henson film starring Jennifer Connelly as the fed-up babysitter named Sarah who must rescue her infant charge from the clutches of the evil Goblin King Jareth (played by David Bowie). The new book Jim Henson's Labyrinth Artist Tribute shows that three decades has not softened the love for this film. Here, illustrators profess their love for the fantasy classic by offering up scrumptious renditions of the film's unique and inventive characters, imaginative locations, and its unforgettable moments.

On the television side of visual media, there are a few books that are worth your consideration. First, there's The Star Trek Encyclopedia by Michael & Denise Okuda, which has been revised to celebrate fifty years of the classic television show. A lot has happened in the final frontier since this was first published in 1997, so this newly redesigned two-volume encyclopedia contains more than 300 additional pages covering the last years of Deep Space Nine, the films that have since appeared through this year's Star Trek Beyond, and more. There's a lot of Trek lore to behold in its sturdy slipcase. There's also Doctor Who: Whographica: An Infographic Guide to Space and Time. This is a collection of double-page infographics that explain the long-running television series in a new and fun way. Readers will see, among other things, the Doctor's family tree and a roundup of all the weapons in the Doctor Who universe. Fans of the 1960s Batman show will adore Batman: A Celebration of the Classic TV Series by Robert Garcia and Joe Desris. This wonderful look back at one of my childhood favorites includes classic images, rare stills, photography, and production art – all the ingredients you need to relive the joy that was Batman.

Comics readers – especially fans of Batman – may appreciate Absolute Batman Year One by Frank Miller and illustrated by David Mazzucchelli. This is the definitive edition of Miller's Batman, originally seen in the 1980s graphic novels, which heavily influenced the modern-day interpretations of the Dark Knight. There's also Batman: The Silver Age Newspaper Comics Volume 3 (1969-1972), the final volume of the Silver Age Batman newspaper strips, which collects not only the newspaper strips, but also the rare 1972 strips that were created without input from DC Comics and in which Batman was no longer featured but Bruce Wayne was.