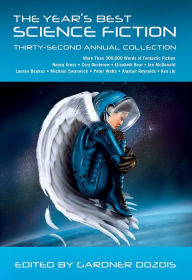 I love short fiction. There, I said it.

I sometimes get strange looks when I mention that. When I ask people about the reason for the strange looks, the answers I get are usually along the lines of "the stories aren't long enough" and "the stories end just as I'm getting into it." True, short fiction is...short...but that's hardly a handicap. The length is actually one of the appeals. Short fiction doesn't overstay its welcome like some books do. It allows readers to expand their reading horizons in a relatively short amount of time by offering diverse stories written in a variety of writing styles. Short fiction is—in short—rewarding.

These are some of the reasons I like reading short fiction anthologies focusing on speculative fiction (science fiction, fantasy, and horror). There are other reasons, too, which I will discuss here. Since I read it recently, I'm going to pick examples from The Year's Best Science Fiction: Thirty-Second Annual Collection, edited by Gardner Dozois, because this long-running series is the definitive go-to volume for science fiction-literature. The same arguments hold for other anthologies as well. (Want more anthology suggestions? Check out the previous article about What Goes Into Creating an Annual "Year's Best" Speculative Fiction Anthology.)

By way of example, consider "The Prodigal Son" by Allen M. Steele, which is about a private corporation's efforts to launch the first interstellar spaceship. There are science-fictional elements like the ship itself and the state of the near future, but the story is really about its main protagonist, the misfit 28-year-old son of the family behind the corporation, who does not share his family's passion for space travel. In "The Man Who Sold the Moon" by Cory Doctorow, hardware hackers invent a revolutionary 3D-printing machine that uses solar power to convert desert sand into ceramic panels suitable for building habitation structures on the moon. It's an intriguing mashup of so-called maker and Burning Man cultures. Then there's "The Fifth Dragon" by Ian McDonald which explores the realistic and complex relationship between two women who meet on their way to the moon to become immigrant workers. In "Vladimir Chong Chooses to Die" by Lavie Tidhar, a man nearing the end of his life chooses assisted suicide instead of having his memory slowly fade away. Despite the science-fictional content of these stories, all of them are about the people, not the technology.

Aliens are a mainstay of science fiction, and why not? They make great stand-ins for "monsters" and are the epitome of the unknown. Aliens also make effective mirrors. By portraying "The Other," authors are really holding up alien cultures as a comparison to our own ways. Sometimes a story about aliens can help us see the best and the worst of humanity.

In "Yesterday’s Kin" by Nancy Kress, for example, mysterious aliens land in New York harbor, supposedly on a mission of peace. A team of scientists are sent in to investigate, wherein readers learn about the value of familial relationships as well as contemplative themes like selfishness vs. cooperation. Meanwhile, in "Communion" by Mary Anne Mohanraj, an alien comes to a human world to collect the remains of his dead brother, who fell protecting humans. He's unexpectedly put in the role of relationship counselor as two human women discuss the merits of genetic modification in humans. In these stories, the presence of aliens is a tool used to help us see ourselves from an outside perspective.

Aliens are just one of the main tropes of science fiction. Others include robots, cyberpunk, time travel. Close-minded readers might immediately judge such stories to be run-of-the-mill and unoriginal. If so, they are short-changing themselves. Stories are rarely "about" tropes—tropes are just a tool employed by writers to tell a good story. The quality of storytelling remains unaffected by the tropes employed. Skilled writers can take the oldest of tropes and tell outstanding stories.

Case in point: "In Babelsberg" by Alastair Reynolds. It's about an artificially intelligent robot named Vincent, designed to be a deep space probe meant for exploring and mapping parts of the unknown universe. Vincent, something of a celebrity among humans, makes his rounds on the talk show circuit—which offers the perfect opportunity for the author to explore deeper meaning of human culture. Another example: "The Rider" by Jérôme Cigut, a cyberpunk story set against the backdrop of warring artificial intelligences. The AIs use humans as transportation vehicles in "meatspace" which makes for a story that's not only fast and fun, but also provides a framework for thought-provoking ideas. "Grand Jeté (The Great Leap)" by Rachel Swirsky is an outstanding Pinocchio-esque story in which an inventor creates an artificial human in the likeness of his terminally ill daughter. Just another robot story? Hardly! Numerous thought-provoking issues are raised by the seemingly simple premise.

Ask yourself this: what's the main reason you read fiction? Chances some form of the word "entertainment" was involved. People read fiction for fun, and where else can you experience so many fun stories than in a speculative fiction anthology that offers cool new worlds and ideas around which to tell them?

Few stories are as page-turning as "The Regular" by Ken Liu, set in a near-future Boston where a cybernetically enhanced investigator goes looking for a deadly serial killer. "West to East" by Jay Lake is as superb an adventure story as you're ever likely to read. It involves a pair of space travelers stranded on an alien planet with a harsh atmosphere and having no way to return home. If you could encapsulate everything that is weird and wonderful about 1950s Sci-Fi B-movies, it'd probably look like "Passage of Earth" by Michael Swanwick, the story of an alien invasion as seen from the perspective of a medical examiner and his ex-wife. Then there's the fast-moving "Red Light, and Rain" by Gareth L. Powell, a gripping action story about two time-traveling enhanced humans who wage a battle on the streets of present-day Amsterdam.

Stories Are Windows Into Bigger Worlds

A handful of stories in The Year's Best Science Fiction: Thirty-Second Annual Collection point readers who want "more of same" toward longer novels that take place in the same universe. "Shooting the Apocalypse" by Paolo Bacigalupi, depicting a near-future Midwest United States where water is at a premium, is set in the world of his novel The Water Knife. Karl Schroeder's "Jubilee" is set in the same universe as his novel Lockstep, which depicts societies that enter a state of periodic suspended animation enabling them able to live their lives piecemeal across centuries. Aliette de Bodard's "The Days of the War, as Red as Blood, as Dark as Bile," about a young girl forced to evacuate her home on a space station, is a direct sequel to On a Red Station, Drifting. The aforementioned "Vladimir Chong Chooses to Die" by Lavie Tidhar is part of the author's culturally diverse Central Station sequence of stories, soon to be collected as a separate book. Finally, the aforementioned "The Fifth Dragon" by Ian McDonald serves as a prequel to Luna: New Moon.