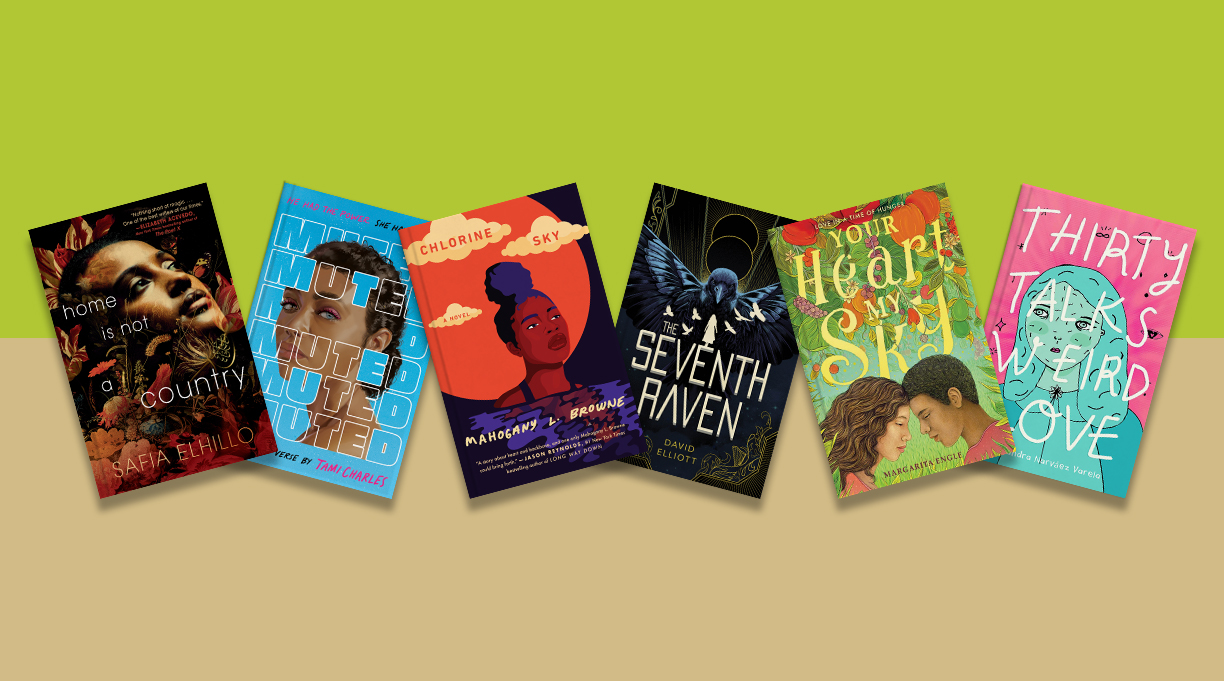 When Amanda Gorman, at age 22, became the youngest inaugural poet in U.S. history, many remarked on how her youth, talent, and magnetism put poetry firmly in the public eye. While poetry for adults is often perceived as a niche field, young readers delight in poems, as is evident from the tremendous popularity of authors such as Shel Silverstein, Michael Rosen, Jason Reynolds, and Elizabeth Acevedo. Teens have, for their part, done a lot to put Instagram poets on the map, most notably Rupi Kaur, who has over 4 million followers. Leaving aside the scorn from the literary establishment that is regularly heaped upon poets who achieve such widespread success—especially when it is due to strong support from young women—the fact remains that poetry clearly resonates strongly with youth, making Gorman’s meteoric rise fitting. This year is off to a very strong start with a number of YA novels in verse that will appeal to a broad range of tastes.

Chlorine Sky by Mahogany L. Browne (Crown, Jan. 12): A teenage girl wrestles with questions of self-worth and the respect she deserves from her former best friend as she grows into herself. She feels at home on the basketball court even though her winning bruises boys’ egos. This is a story of figuring out who you are rather than shrinking to become the version of yourself the world perceives. (Watch a video interview with Browne.)

Thirty Talks Weird Love by Alessandra Narváez Varela (Cinco Puntos Press, Jan. 19): Growing up in Ciudad Juárez, Mexico, a 13-year-old girl encounters her 30-year-old self, who is concerned about her well-being and full of good, if unsolicited, advice. As a teen, she is juggling academic ambition, friendship stress, body image, and living in a town where femicides are rampant. Will she listen to the wisdom of her older counterpart who has not turned out as imagined?

Muted by Tami Charles (Scholastic, Feb. 2): Small-town friends—“three brown girls, / three heartbeats colliding”—have big musical talent and even bigger dreams that seem unattainable. “But as the sky grew darker, / the stars undressed themselves, / and the universe whispered ever-so-softly, / Some wishes are granted / only to the bold….” Their path to RB stardom, however, becomes a fraught journey of self-reclamation. (Read an interview with Charles.)

Home Is Not a Country by Safia Elhillo (Make Me a World, March 2): Elements of magical realism punctuate this story of a lonely Muslim American girl; she’s curious about her late father, targeted by Islamophobic classmates, and estranged from the boy who is her best friend. A journey through time and space with a shadowy spirit girl she believes embodies everything her mother would have preferred in a daughter offers eye-opening perspectives and insights. (Read an interview with Elhillo.)

The Seventh Raven by David Elliott, illustrated by Rovina Cai (HMH Books, March 16): This adaptation of the fairy tale “The Seven Ravens” tells the story of a teenage girl, a much-longed-for daughter, who was born sickly and frail. When her seven older brothers anger their father, he curses them in a fit of rage and sorrow, turning them into birds. Years later, after discovering the truth, she is determined to set them free.

Your Heart, My Sky: Love in a Time of Hunger by Margarita Engle (Atheneum, March 23): A boy and a girl in 1990s Cuba fall in love and struggle side by side as they face starvation and government oppression with the passion of youth. It’s a time of secrecy and fear, and the need to focus on survival means risks are inevitable—but at what cost? Ultimately, where does young love fall in calculations of trust and loyalty? (Read an interview with Engle.)