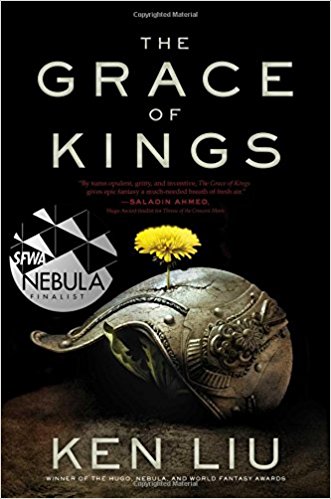 As readers, the idea of our favorite books being turned into film and television production frightens us and excites us. It's scary because so many things can go wrong that could result in – gasp! – an unfaithful adaptation. Yet that doesn't stop us from being excited because we get to re-experience the stories we love. Here are seven forthcoming fantasy book adaptations that hopefully give us nothing to worry about…

The Way of Kings by Brandon Sanderson

The Way of Kings, the first book in Brandon Sanderson's epic fantasy series The Stormlight Archive – itself just one corner of the Cosmere universe – takes place on Roshar, a world that is routinely devastated by the cataclysm known as Desolation. At one time, the brave warriors known as the Knights Radiant helped protect the land from this devastation, but all that remains of their legacy are their magical swords and armor – artifacts that possess the power to turn ordinary men into near-invincible warriors. Wars are raged by fierce armies over these magical items, and the lives of several characters impacted by one such war share the focus of the story.

The film rights to all of Sanderson's Cosmere novels were picked up by DMG Entertainment in a multi-million-dollar deal. Because of the richness of the universe and the number of stories already existing in it, DMG likens the purchase to acquiring an entire comic book universe. First on their list of adaptations is The Stormlight Archive, so expect to see people lining up to see The Way of Kings when it hits theaters.

Films aren't the only venue to get good fantasy. Television gets its fair share, too. Case in point: Hulu has picked up television rights for a series based on Sarah J. Maas' exciting young adult fantasy Throne of Glass. The pilot episode is being written by Kira Snyder, who wrote on The 100 and Hulu's adaptation of Margaret Atwood's The Handmaid's Tale.

So what's it about? In Throne of Glass, Celaena Sardothien is a teenage assassin who's just finished a year of imprisonment. The Prince offers Celaena her freedom on the condition that she fights as his champion in a brutal competition set up to find a new royal assassin. Should she eliminate a series of twenty-three opponents, she will get to serve the kingdom for three years and then gain her freedom.

Grace of Kings by Ken Liu

In Grace of Kings by Ken Liu, two rebels – Kuni Garu, a charming bandit, and Mata Zyndu, the son of a deposed duke – become friends when they join together to oppose the tyranny of their emperor and face conscripted armies, silk-draped airships, and shapeshifting gods. Once the deed is done, however, they become leaders of two opposing factions who have very different ideas about how the land should be ruled.

Grace of Kings is just the first book in The Dandelion Dynasty fantasy trilogy, which is being labeled as "silpunk" for its East Asian flavor. The Wall of Storms is the second book. DMG Entertainment picked up worldwide film and licensing rights to Liu's entire trilogy with the intention of turning The Dandelion Dynasty series into a franchise.  (Bonus for Ken Liu fans: "The Hidden Girl," his short story about a team of assassins able to navigate between dimensions, has also been optioned for a film.)

If your favorite fantasy leans less toward epic fantasies and more towards urban fantasy, then you'll want to know about Sandman Slim, the gritty urban fantasy series written by Richard Kadrey. Eight books strong (with a ninth due this year), the series is noted for its stylistic writing and gritty atmosphere. The first book in the series introduces the character of James "Sandman Slim" Stark, a hard-boiled, supernatural vigilante who escapes from hell to avenge the death of his girlfriend and then goes on to deal with other supernatural bad guys.

The rights to Sandman Slim have been picked up by Studio 8. The book will be adapted by Kel Symons, who adapted Money Shot and wrote a live action version of Disney's classic Aladdin. It's still too early to know much more – this is how it is with film adaptation news – but the studio hopes this will be the start of a successful franchise.

The Warded Man, the first book in Peter V. Brett's Demon Cycle, takes place in a terrifying distant future where humanity has lost the night to hordes of demons hellbent on eradicating mankind from the face of the planet. Humans once had some form of protection from these dangerous supernatural beasts: magical wards painted on doorways and buildings that would keep them away. But that magical art has been forgotten…until a man emerges from the desert covered in ward tattoos and aims to teach humans how to defend themselves once more.

Good news for readers who worry that Hollywood loses touch with the aspects that make their favorite novel great: Peter V. Brett himself is adapting The Warded Man as a screenplay. The film thus promises to maintain a fast-moving plot while portraying lots of action – same as the book.

The Alchemist by Paulo Coelho

Brazilian author Paulo Coelho's classic quest fantasy features Santiago, an Andalusian shepherd who dreams of hidden Egyptian treasure and yearns to travel to the pyramids in search of it. Along the way he meets a king who introduces Santiago to the concept of a "Personal Legend" and gives him magical stones. He also meets an Englishman in search of an Alchemist; an Arabian woman with whom he falls in love; and the Alchemist who has further teachings about Personal Legend.

The Alchemist teaches readers that finding your destiny and fulfilling your dreams is a worthy goal. The destiny of the novel itself is apparently to be adapted into a film by Sony-based TriStar, who picked up worldwide rights to the enduring classic.

If you haven't heard of Jessica Townsend's Nevermoor, it's probably because it won't be published until later this year. Hollywood definitely has the jump on you here. They've already acquired the movie rights to this young adult fantasy. Fox studios is producing the adaptation.

Nevermoor is the story of Morrigan Crow, an unlucky girl born on Eventide, the unluckiest day for any child to be born. Morrigan is thus blamed for all misfortunes, and her curse means she is doomed to die at midnight on her eleventh birthday. But before that happens, the mysterious Jupiter North appears to whisk her away to the magical city of Nevermoor, where she is meant to compete against other children who possess extraordinary abilities in a series of trials. If she wins, she can live out her life in Nevermoor. If she loses, it's back to her impending doom.