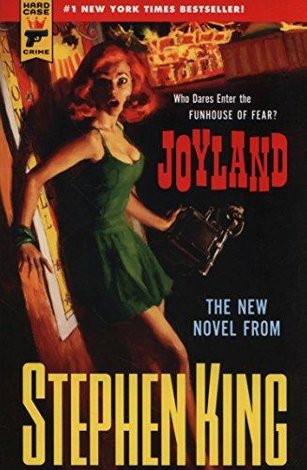 Stephen King was already (if you'll pardon the expression) the King of Adaptations. More than any other author, his books have been adapted to television and film. It's not hard to figure out why. Not only is he a bestselling author, he's prolific, too. For filmmakers and television producers, that means there's already a built-in audience for many potential projects.

Carnivals, amusement parks, and the circus seem to be a popular destination for the weird. Perhaps that's why King used an amusement park called Joyland as the setting for a story steeped in nostalgia and topped off with a dash of horror. Devin Jones is a heartbroken college student who takes a job at Joyland—an amusement park haunted by the ghost of a woman who was murdered in the funhouse—befriends a dying boy, and falls for his mother. Joyland was recently optioned for television by Freeform and the pilot episode will be written by Chris Peña (Jane the Virgin) and Cyrus Nowrasteh (The Stoning of Soraya M.).

You may remember the 1994 four-part TV miniseries adaptation of King's classic post-apocalyptic story about the aftermath of plague that kills off 99% of the world's population. The survivors find themselves in a battle between good evil and they must choose sides: stand beside the 108-year-old Mother Abagail and fight for good, or stand with the embodiment of evil, Randall Flagg. The scope of King's now-classic story is simply too big for a single film, so it is once again being adapted for television. CBS All Access has ordered a 10-episode series to be written by Josh Boone and Ben Cavell.

If you only read Stephen King's novels you may have missed the 2011 novella Mile 81. It's about a young boy named Pete, his brother, and a lot of strangers who each encounter a malevolent supernatural force around the same stretch of highway. Alistair Legrand will direct and Luke Harvis is writing the screenplay adaptation. Both have previously worked together on The Diabolical.

King's 2006 novel is about a widow named Lisey who, two year's after her husband's death, is forced to confront the dark places he'd go to churn out bestselling novels. This novel has been hailed by critics as one that shows King's maturity as a writer. It also perhaps reveals personal insight into the mind of a bestselling author. Apple has ordered an eight-episode series based on King's love story, which will be written and produced by King himself. Oscar winner Julianne Moore is attached to the project to play Lisey.

I remember watching the somewhat cheesy 1979 television adaptation of King's 1975 vampire novel and being creeped out. There was apparently a 2004 adaptation, too! It seems that a new version is now in the works. Producer/Writer collaborators James Wan and Gary Dauberman are working on a new film adaptation for New Line. Given the larger budget of films, I would expect that this version of King's story—which features another writer who returns to his small-town home in Maine to write about a haunted mansion and finds vampires instead—to be much scarier.

King's 2003 story "Rest Stop", originally printed in Esquire magazine and collected with other King short fiction in 2008's Just After Sunset, is another story whose protagonist is, once again, a writer. (Write about what you know, amiright?) John Dykstra writes under the pseudonym Rick Hardin. On the way back from a writers' group meeting, Dykstra encounters a case of domestic abuse and assumes the persona of Hardin to handle the situation. Alex Ross Perry will write and direct a film adaptation of King's short story, which is described as a cat and mouse thriller that follows two women after a fateful encounter at a highway rest stop.

The Eyes of The Dragon

The Eyes of the Dragon (1984) is the one King novel that's closest to traditional fantasy. It features a king, a magician, elves and faeries and a dragon (or at least a mounted head of one). It's the story of two young princes in the realm of Delain (mentioned in another King novel: The Dark Tower II: The Drawing of the Three). Delain is ruled by King Roland whose manipulative court magician fears the young boys may be his undoing. The magician, Flagg (Sound familiar? See The Stand.), frames young Peter for the death of his father. Peter is then locked up in a tower while Flagg manipulates Thomas, now a twelve-year-old King, into giving him more power. A new proposed adaptation is in the works at Hulu. The show is being poised as Hulu's young adult answer to Game of Thrones. The pilot episode is being written by Seth Grahame-Smith.