A Former Teacher Brings the Magic of Nature to Middle Graders 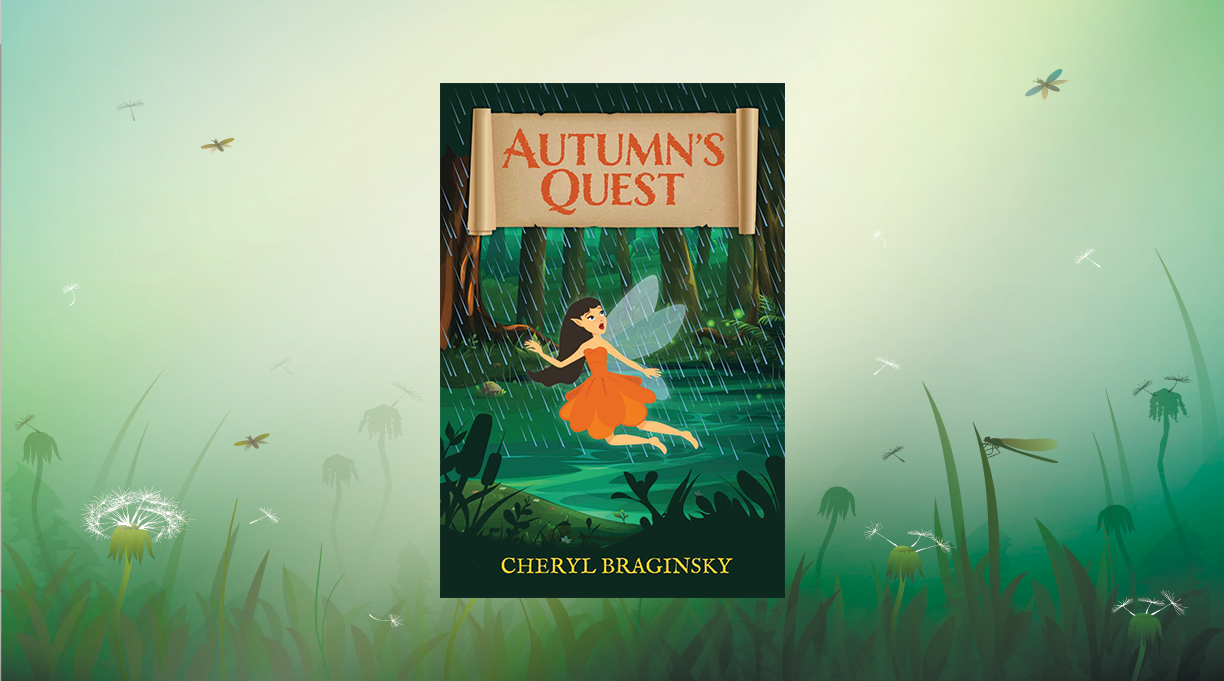 For author Cheryl Braginsky, nature and magic have always been inseparable. She grew up reading the Flower Fairies series by Cicely Mary Barker, and she’s always been an ardent nature lover. Her desire to bring a little bit of magic and the outdoors into youngsters’ lives led her to write Autumn’s Quest, the story of a fairy princess who must become a warrior in order to save her people from the cruel villain Azara.

“I wanted to write a book that would empower young children, especially little girls,” Braginsky explains. As a former third and fourth grade teacher, she watched many girls go through a transformation: “They lose confidence in themselves, and they become pleasers,” she says. “I wanted to write about a fairy who was very strong, who learned to be strong within herself. That’s a lot of what Autumn is about. Over the course of the book, she learns to become a warrior, to become someone who can stand up for herself.”

Autumn Primrose’s adventure begins when she’s nearly captured by an evil boggart; although she is a tree healer and not a fighter, she finds a way to free herself, revealing a character who’s never helpless and who doesn’t wait to be rescued:

The beast trudged on through the wind and rain….Apparently convinced that its prisoner was under control, it sat down on a fallen log and relaxed its grip. As she felt the vines loosen, Autumn searched for a way to break free. All at once she remembered the yellow eyes. Long, wicked thorns stuck out like swords all around her. In a flash she slid out of the boggart’s hold, broke off the longest thorn in sight, aimed at one of the creature’s eyes, and stabbed the thorn deep within it. The evil monster howled as Autumn zoomed away.

Autumn has nearly escaped when she encounters elf warrior Capt. Lanceleaf Cottonwood, who’s on hand to help her when the angry boggart returns. Unfortunately, Lance brings terrible news: Azara has escaped from her prison and has built an army of evil boggarts, intending to once again take over the Fairy Realm and enslave Autumn’s people. For Autumn to face Azara—and to rescue her beloved grandmother, the fairy queen—she must complete a pilgrimage to gain magic powers. Along the way, Lance helps her learn to fight, and many other friends aid her in her quest.

According to Kirkus Reviews, Autumn “is brave, empathetic, and thoughtful. More importantly, her character demonstrates nuance and growth; she struggles with doubts about her abilities and fears for her loved ones.” Although Autumn takes on the mantle of a warrior, the author makes sure to highlight that she prefers using diplomacy as a solution, and even during the final confrontation with Azara, she shows compassion. “She never kills anybody,” Braginsky points out, though many boggarts die by others’ hands in combat scenes. In order to keep children from sympathizing with the monstrous villains, the author very clearly draws a line between good and evil—and she makes sure that the villain is handily defeated. “I didn’t want to mix it up, because it’s for fairly young children,” Braginsky says. “I didn’t want [the boggarts] to be human in any way.”

However, she does effectively humanize many of the animal characters. Braginsky, who has two companion dogs (a beagle named Bailey, and a Chihuahua named Daisy), feels that animals deserve respect, so she enjoys writing about them. “It goes back to how I feel about nature,” she notes. “To me, animals have feelings and emotions and souls....I learn a lot from animals. I think we all can.”

Braginsky grew up on the San Francisco Peninsula, close to the ocean and not far from California’s giant redwood trees. “To me, they were sacred and magical,” she recalls. “I have a definite appreciation for nature and a love of getting outdoors, either by the ocean or in the forest. Nature is where I go for healing and for spiritual life.” When Braginsky was teaching in San Francisco, however, she realized that many children, especially poor students whose parents worked two or three jobs, never had access to the woods that she loved.

In order to get the kids into nature, she would take her students on a field trip to Muir Wood. “For many inner-city kids, they’d never seen a forest like that, and it’s not that far from San Francisco,” she explains. “I can remember one time I took my kids...up a path up a hill in the woods.” Although most of the students thought it was wonderful, she says, “one little boy came up to me afterward [and] said, ‘That’s the scariest thing I’ve ever done in my life.’ And I thought, ‘Oh my God, this is a kid who’s seen shootings and drug addicts shooting up, but hiking up the side of that hill was scary.’ ”

That memory stuck with Braginsky, as did her observation that many modern children base their imaginative play on screen-based media rather than on adventures in the real-life outdoors. “I think I just wanted to empower children,” she says. “The world that they live in can be very frightening in itself, so I wanted to give them ways to deal with that.” She included fairies in her tale because “giving children that sense of wonder and the opportunity to use imagination is why I write fantasy.” Braginsky also creates posts on her Fairy Havens blog that tell stories of the Fairy Realm in the voice of Autumn (who “writes” them).

In the end, the author hopes that her love of nature will be passed on to her readers. “My concerns about the environment are really important to me,” she says. “The fairies’ job is to take care of nature. That’s why Autumn was a tree healer. I am hoping that concern for the environment comes out of my stories, too.”