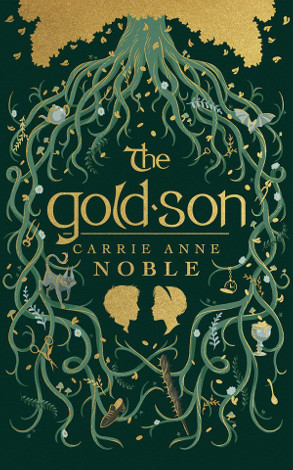 BOOK REPORT for The Gold-Son by Carrie Anne Noble

Cover Story: Oh, What a Tangled Web We Weave

When first we practice to deceive … or design a cover with a lot of things going on amongst very twisty roots. Each small element has a place in the story, and the fact that all the gold bits are shiny and metallic ties in well with the plot, too.

Tommin Kelly wants little more than to make beautiful shoes and take care of his grandmother. But something inside him wants more, particularly items made from silver and gold—items that belong to other people.

Tommin doesn’t want to steal, but he literally can’t help it. If he doesn’t, he gets ill. So when wealthy Lorcan Reilly shows up in town, with his niece Eve, and offers Tommin help for what ails him, Tommin accepts. Little does he know that Lorcan—a Leprechaun—is out for his own personal gain, and helping Tommin (and Eve) actually just means turning them into Leprechauns, too.

From the second we learn about Tommin’s affliction, it’s clear that not good things are going to happen to him. And then he meets Lorcan, who’s obviously not what he seems (and is actually a terrible excuse for a human-adjacent being, but more on that later). I worried for Tommin from the very start, and my worries weren’t unfounded. He also acted so much younger than his 16 years. I’m not sure if that’s a bi-product of the era in which he was born (early 1800s), but it certainly caused problems with any true connection the two of us could have made.

Eve, on the other hand, is a spitfire. She’s had a rough time of life, but the inner strength she gains through overcoming the odds is nothing short of impressive. I really saw something in her in Part One of The Gold-Son, and could definitely see us becoming fast friends. Part Two, however, sees Eve change some, and become focused more on others. I appreciate why she does what she does (no spoilers), but the young, take-charge woman I met early on wasn’t as apparent. I get that people grow and change, but she might have changed too much for us to remain friends.

The love story in The Gold-Son is supposed to be a big deal. At least, I think it is. It’s a driving force in the latter half of the book. But there honestly wasn’t much chemistry, and the attraction was more of the “tell, don’t show” variety. It all felt very surface level, regardless of how much the characters thought about their feelings.

The Gold-Son feels very like a folk story. It’s filled with information about Leprechauns (e.g., they call themselves Leps) and takes place in part in a faerie realm. In this, Carrie Anne Noble’s written a fascinating look at a sub-species of the Fae that I’m pretty unfamiliar with. The actual plot of the story, however, never really grabbed me, and the disparate elements don’t quite form a cohesive whole. I connected with a few of the characters, but later found that the parts of them I liked at first had changed into something I didn’t care all that much about. And although it read like a folk tale, the Big Bad seemed all-too-human, and the moral at the end was a tad vague and overly sentimental.

I enjoyed learning more about Noble’s versions of the little Irish men with red hair who like to hoard coins and cause rainbows. (Only some of those characteristics are true, at least in the case of The Gold-Son.) Having just watched American Gods,* I’m particularly intrigued by Leprechauns who aren’t anything like the stereotypes we’re familiar with.

*I haven’t seen the season finale, however, so no spoilers, please!

Something about Lorcan rubs Tommin the wrong way from the moment they meet. And although he ignores his instincts, he really shouldn’t. Lorcan is abusive, both physically and emotionally, and looks out for himself above all others.

It was a fun first date, Book, but when I got home I realized that a few of my rings had gone missing. I thought I might have just left them at home, but having looked high and low, I think your stories might have been more than just bits of fancy. I hope you won’t take offense if I don’t invite you over.

The Gold-Son is available now.

Mandy lives in Austin, TX, where she's a technical writer by day and a pop culture junkie by night. When she's not ensconced in a book forForever Young Adult, Mandy can be found swooning over superheroes, dreaming of The Doctor, and grinning at GIFs.