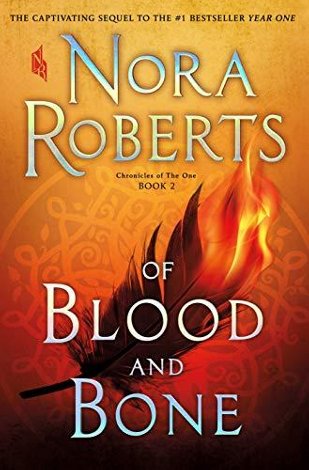 I’m going to mostly ignore the recent dustup, except to say what a very sad situation it is. And if you have any desire to become an author, please, please, please don’t disrespect Queen Nora—and, ummm, maybe do a quick Google search before you accuse Beverly Jenkins of white privilege? *cough*

My favorite write-up that I’ve seen so far was this one from groupthink.kinja.com. I especially liked her edit #2, which included this, a good summary of how I think a lot of people feel about the situation: “And second, I think great, young talent should generally be nurtured, and God knows we need more women POC authors. That’s part of my anger: Tomi had it all and she had to go and be petty and indulge in objectively terrible behavior.”

Now, let me talk about OF BLOOD AND BONE by Nora Roberts.

I love this series. Book 1, YEAR ONE came out last year and it was one of my favorite books of 2017 (starred review here).

I also loved OF BLOOD AND BONE. (review here)

Nora Roberts, the #1 New York Times bestselling author of the epic Year One returns with Of Blood and Bone, a new tale of terror and magick in a brand new world.

They look like an everyday family living an ordinary life. But beyond the edges of this peaceful farm, unimaginable forces of light and dark have been unleashed.

Fallon Swift, approaching her thirteenth birthday, barely knows the world that existed before—the city where her parents lived, now in ruins and reclaimed by nature since the Doom sickened and killed billions. Traveling anywhere is a danger, as vicious gangs of Raiders and fanatics called Purity Warriors search for their next victim. Those like Fallon, in possession of gifts, are hunted—and the time is coming when her true nature, her identity as The One, can no longer be hidden.

In a mysterious shelter in the forest, her training is about to begin under the guidance of Mallick, whose skills have been honed over centuries. She will learn the old ways of healing; study and spar; encounter faeries and elves and shifters; and find powers within herself she never imagined. And when the time is right, she will take up the sword, and fight. For until she grows into the woman she was born to be, the world outside will never be whole again.

The Kirkus review says, “This installment feels a bit like a rest between the trauma of The Doom and the war to come except for an explosive end battle; however, meeting the next generation and watching the heroine grow into her powers and leadership is enthralling,” which is an interesting way to put it.

This book is about Fallon’s growth as a woman, a warrior and a leader, and Roberts has created a really fascinating character in The One. But her strength will come not only in her own powers, but in the power of raising armies who believe in her vision of the future, both from magical and non-magical populations.

The world building continues to be stellar. Mallick’s magical woods where he takes Fallon to train are a mystical respite, very Arthurian. At the same time, Roberts reminds us of the painful reality for many survivors of The Doom, especially the magical ones, who were treated with mistrust and brutality.

I’m a Nora fan. Even if you’ve never read one of her books, you have to (or should!) admire her discipline and output. I have read a number of her books and so I admire her talent as well as her versatility. Just comparing her NR titles to her JD Robb titles shows how flexible her storytelling can be, but her NR titles alone demonstrate a vast spectrum of style and world-building.

So if you’ve never read a Nora book before, I hope you’ll pick one up. I highly, highly recommend this series, which is a bit of a departure for her. But give her a try, no matter the title. She’s considered a queen of romance for a reason, and her typical storylines also celebrate the powers of family, community, acceptance, and self-empowerment.

Queen Nora helped define romance, and I for one think she should be a household name. The fact that she isn’t more widely recognized is due to sexism more than anything, in my humble opinion. How many people do you know who’ve never heard of Stephen King or John Grisham? And how many men do you know who don’t know Nora Roberts? How many women?

If you’re reading this, it’s likely you already know who she is. But isn’t it a shame that not everyone does?

Can’t wait for Book 3. Anyone know the title yet?