All the Must-Read Science Fiction, Fantasy and Horror Out in April 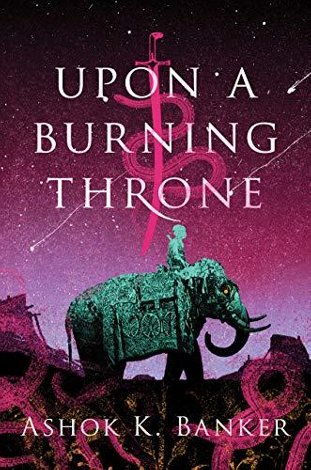 April brings a slew of new science fiction, fantasy and horror books to add to your reading pile. This month's selection brings stories about giant flesh-eating bugs, robotic alien warships, human evolution, an outcast magician seeking revenge, and a benevolent artificial intelligence that wants to save the world.

Upon a Burning Throne by Ashok K. Banker

WHAT IT'S ABOUT:Two young princes named Adri and Shvate pass the Test of Fire to inherit the throne and lead the Burnt Empire.Then, an outsider who also happens to be the daughter of a powerful demonlord named Jarsun, also lays claim to the throne. When she is denied, Jarsun vows to destroy the Empire.

WHY YOU MIGHT LIKE IT: This take on Indian folklore stands out in a field dominated by western fare.

The Nest by Gregory A. Douglas

WHAT IT'S ABOUT: A garbage dump on an island off Cape Cod is home to lots of creepy, crawly bugs. When a new pest control chemical is used on them, it mutates them, resulting in giant man-eating cockroaches. [shivers] This classic 1980s "When Animals Attack" horror is just the first title in the new Paperbacks from Hell reprint series and sets the mood for all the gory goodness that will follow. (It was also the basis for the 1988 cult horror film of the same name.)

WHY YOU MIGHT LIKE IT: Douglas doesn't shy away from graphic depictions of the things that frighten us most about bugs. This is a book that you'll read next to a can of bug spray.

A Boy and His Dog at the End of the World by C. A. Fletcher

WHAT IT'S ABOUT: In this post-apocalyptic tale, most people are unable to procreate, leading to a serious decline in the world's population. Griz lives on a remote island with a few other survivors, including his parents, brothers, and 2 dogs who, in this sparsely-populated world, are as important as family. That's why Griz ventures out into the dangerous landscape when one of the dogs is taken.

WHY YOU MIGHT LIKE IT: Because this is a "soft apocalypse", the story focuses on Griz's personal journey, giving the story emotional impact.

The Dark Game by Jonathan Janz

WHAT IT'S ABOUT: Ten writers think they are embarking on an opportunity of a lifetime when they are invited to a summer-long writing retreat with a world-renowned author named Roderick Wells. But Wells has darker things in store for the unsuspecting participants. They're about to be enlisted in a dangerous game that pits them against one another in a struggle for their very lives.

WHAT IT'S ABOUT: Human migration through space has advanced to the far corners of the universe where there is a very real danger of attacks from robotic alien warships. On the world of Deception Well, it is learned that the planets closest to Earth have fallen into ruins. Urban, a hardened adventurer, intends to take a captive alien starship and a crew of explorers and scientists to find out why.

WHY YOU MIGHT LIKE IT: Nagata's Nanotech Succession series is good science fiction and this story, set in the same universe, is an accessible entry point.

WHAT IT'S ABOUT: In a Tokyo of the future, a pair of mismatched cops team up to solve crimes. U.S. peacekeeper Emma Higashi and Tokyo Metropolitan Police Detective Miyako Koreda must overcome political and personal friction to solve a series of related crimes.

WHAT IT'S ABOUT: The impact of technology. In 1882 a plant biologist researches a species capable of removing the psychic barriers between human minds. One hundred years later, a computer hacker goes to work for a company specializing in DNA and mass surveillance. In 2042, the Ministry of Genetics in Argentina uses the tech to detect human DNA from a distance and track citizens without their knowledge or consent. The next step is a change in the human genome itself.

WHY YOU MIGHT LIKE IT: The relatively time span of the novel highlights the progression from scientific curiosity to evolution—no small feat.

WHAT IT'S ABOUT: An interstellar repo man named Fergus Ferguson aims to steal back a spaceship and tracks it to a backwater planet on the verge of a civil war. Worse, dangerous aliens that were thought to be nothing more than myth turn out to be very, very real and very much interested in Ferguson.

WHY YOU MIGHT LIKE IT: This is a fast-paced, action-packed caper novel in which anything than can go wrong, does—much to the enjoyment of the reader.

WHAT IT'S ABOUT: Silicon Isle, where all the world's electronics go to be recycled through manual labor, offers hope to the immigrants lured there with promises of riches and freedom. What they get, however, is a firsthand lesson in corporate suppression, caste systems and ecoterrorism.

WHY YOU MIGHT LIKE IT: This near-future eco-techno-thriller taps into the perennial tug-of-war between the Haves and the Have-Nots. Also a plus: plenty of action.

The Luminous Dead by Caitlin Starling

WHAT IT'S ABOUT: A cave diver named Gyre Price lies her way onto a mission to explore caves on another planet. Her team leader, Em, knows about Gyre's deception and uses it as leverage to control Gyre. When Gyre descends into the caves and things start going wrong, she becomes lost and must find a way out,

WHY YOU MIGHT LIKE IT: Gyre’s personal journey. Before Gyre can find a way out of the dark, alien caves, she must find herself.

WHAT IT'S ABOUT: Sal the Cacophony is a powerful magician caught between two warring empires. When she becomes an outcast, she seeks refuge in The Scar, the land between them where rogue mages go to disappear. Now Sal the Cacophony, with her magic gun in hand, is seeking revenge on the seven wizards who stole her powers.

WHY YOU MIGHT LIKE IT: The author describes it as a "love letter to Final Fantasy". Oh, and he mentions it has revenge, murder, riding birds, giant mechanical monstrosities, and (my favorite) lunatics wearing opera masks.

WHAT IT'S ABOUT: This is a short fiction anthology—the last in the series as Strahan is set to launch a new one next year—featuring stories by Charlie Jane Anders, Greg Egan, Yoon Ha Lee, Linda Nagata, Alastair Reynolds, Caroline M. Yoachim, and more.

WHY YOU MIGHT LIKE IT: Strahan is one the field's most astute editors and consistently collects short fiction hits.

WHAT IT'S ABOUT: An artificial intelligence named Emily is designed to help humans cope with the fact that the sun is dying. Deep inside the human genome, Emily finds a solution to save the human race, but before she can share it, the lab where she resides is attacked by those who don't trust her. Narrowly escaping, it's now up to Emily and her two human companions (a college student and a small-town Sheriff) to save the human race.

WHY YOU MIGHT LIKE IT: The characterization of Emily, despite her being an AI, gives the story a human-centric focus.

In addition to the Strahan's Year's Best Science Fiction and Fantasy Volume 13 anthology listed above, seek out these additional short fiction finds: