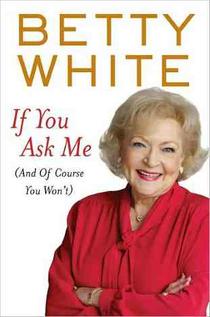 Betty White’s been busy lately. Between mud-wrestling over Snickers during the 2010 Super Bowl, hosting an episode of Saturday Night Live and starring in the new TV Land series Hot in Cleveland, she’s barely had a moment to breathe. Sometime during all that, though, St. Olaf’s pride and joy found time to pen her sixth book, If You Ask Me (And Of Course You Won’t), a meditation on her life, career and loves—of both the human and animal variety. Here, White tells us about life in front of the camera, her friendship with John Steinbeck and her early start as an author.

Tell us about If You Ask Me (And Of Course You Won’t).

It’s a series of short essays about how I feel on a variety of subjects. One of my earlier books, Betty White in Person, is in the same format.

You write in longhand, correct?

Early on in the book, you write about your love of writing. When did that start?

It’s always been there, for some reason or other. I wrote my first book when I was 6 years old, with a pen that you needed to dip in ink. It was 114 pages. It was a wonderful book, naturally. I ran across a copy recently. Apparently, I couldn’t decide on a title. So I chose two.

Society or Cowgirl, or From Debut to Roundup.

I didn’t know how to end it either. Whether they should leave the ranch or get sick and die. In the end, though, I came up with a brilliant idea. The characters woke up and it had all been a dream!

But you’ve never been tempted to write for television? Or screenplays?

No. In my first series, Life With Elizabeth, a friend who worked on the show would pick me up and drive me to work. On the way home we’d talk about what we’d do next week on the show. But that’s as close as I came to that. I’ve never really been interested. It’s much easier to read the lines of wonderful writers than have to write my own.

You mention in your book that you and your late husband Allen Ludden were good friends with John Steinbeck. Did you pick up any writing tips from him along the way?

Yes, his wife Elaine and my husband Allen went to Yale together. He wrote in longhand, too. If longhand was good enough for Steinbeck, it’s certainly good enough for me. He had a bad back, so he’d stand for hours at his drafting table writing with his white bull terrier Angel lying on his feet. So he couldn’t walk away!

But no, not really. I don’t quite have the effrontery to copy him. I remember when John won the Nobel Prize for Literature and Elaine took it down the street to a shop to have it mounted. She was trying to explain what it was that she wanted, and the shopgirl just looked at her and said, “Mrs. Steinbeck, you don’t have to explain. We don’t get too many of these around here.”

I’ve actually got a handwritten first draft of his acceptance speech for the Nobel Prize. He gave it to Allen one year for his birthday. I have it framed and hanging in my house.

Do you have a favorite Steinbeck book?

Travels with Charley, of course.

You’re widely recognized for all the work you’ve done to support animal welfare. Where did your love for animals come from?  Have you always had pets?

It started in the womb! My mother and father were the same way. Animals were my first friends, my best friends. Right now I have a golden retriever named Pontiac, who’s a career-change guide dog. He had a bum leg, and they can’t give them out as guide dogs unless they’re totally healthy. They were afraid that he might even need surgery and veterinarians can be expensive. So I got him. We’re great and good friends. He’ll be seven this year.

How much has fame changed since when you started out?

I’ve been in the business for 63 years. And I’ve never been off-camera, so I’ve grown comfortable with it. People still greet you as a friend in the street or the market, that hasn’t changed. But the paparazzi! They’re just trying to do their job. But these days, it’s a lot harder to catch a plane.

I’ve got another Hallmark Hall of Fame movie in the works. And there’s another season of Hot in Cleveland starting up in September. We’re shooting another 24 episodes. My co-stars are dynamite, and we’re having the best time. And there’s a new game show that I’m executive producing.

It starts in July. It’s an audience participation game. This time, the older people get to jump all over the younger people. It’s called Off Their Rockers.

I know what I’m doing!