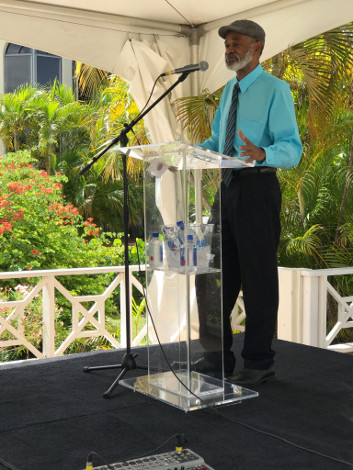 Anguilla is often referred to as the best kept secret in the Caribbean. Anyone who is lucky enough to visit (or better yet, live there) can see why: all 33 beaches on the island are open to the public, and if you visit in May, when it’s not too hot but no longer considered the high season, it’s easy to find a lounge chair to recline in, right in front of the turquoise ocean.

But if you’re a bookworm, there’s another reason to visit in May: the annual Anguilla Lit Fest, which took place from May 18-21 this year. For six years now, local and internationally known writers have gathered at Paradise Cove, a resort in walking distance of some of the most stunning beaches.

Two of the core founders of the festival are Stephanie Stokes Oliver (former editor-in-chief of Essence.com) and her husband, Reginald Oliver, who moved from the U.S. 10 years ago. For this year’s event, the tagline was “a literary jollification” and the theme was “revolution,” in celebration of the 50th anniversary of the Anguilla Revolution.

“A book is the most important tool you can have,” Sherille Hughes, the owner of Paradise Cove, told festivalgoers during the opening remarks on May 19. She referred to the “resilience and pride” of the Anguillan spirit, something that was proudly on display the night before on the lawn at Governor Christina Scott’s house, where winners of the Malliouhana (the Amerindian name for the island) Poetry Competition read from their spirited work.

Unlike some of the American literary festivals, the Anguilla Lit Fest has a true beach vibe. The first event of the day started later than usual due to some AV problems, but no one seemed to mind. It was well worth the wait when Trinidadian artist Llewellyn Mac Intosh (also known as Short Pants) took the stage to deliver Talkalypso, a form of calypso where the lyrics are recited rather than sung. “The Finger,” a piece about prostate exams, drew lots of laughs from the audience.

That afternoon, Yona Deshommes, associate director of publicity at Atria Books, moderated a panel, “Writing in Times That Are Stranger than Fiction,” featuring novelists Kaitlyn Greenidge and Nicole Dennis-Benn, and Allison Hunter, a literary agent at Janklow & Nesbit. Hunter said there’s a hunger for “voices that we don’t necessarily hear from.” And Greenidge, speaking of how dystopian novels have flooded the market, said, “Dystopias really bore me. It’s really interesting if you could write a utopia.” She wants to see how people can imagine their way out of the mess we currently live in. (I could easily see Anguilla as the setting for a utopian story.)  While speaking of her debut novel, Here Comes the Sun, which deals with “post-colonial scars, colorism, classism, race, and sexuality,” Dennis-Benn said: “I have always wanted Jamaicans to wake up, but the world at large to wake up as well. What’s going to bring us all to the table is when we stop looking at our differences and start looking at our similarities.” This is why untold stories are so important, in her opinion.

Saturday’s highlights included a panel on self-publishing featuring Kevin Larimer of Poets & Writers, and a calypso performance in the evening, so popular amongst islanders that cars lined the street.

On Sunday, authors and festival delegates attended a beach party at the Straw Hat restaurant, and it turned really festive when people started dancing under the tent and drinking rum punch in the ocean.

The Anguilla Lit Fest, partially funded by the generosity of bestselling author Dan Brown (who is next year’s headliner), is an intimate experience. Authors and readers mingled during the day and during parties and receptions held in the evening. Students from the island lined up to get their books signed by Ilyasah Shabazz, Malcolm X’s daughter and the author of Growing Up X, Malcolm Little, and X. The festival maintained a merry tone, but Anguillians are very serious about their love of literature.

Michele Filgate is a writer living in New York. In the photo above, (l-r) Yona Deshommes moderates a panel featuring agent Allison Hunter and novelists Nicole Dennis-Benn and Kaitlyn Greenidge. The Anguilla Lit Fest is partially sponsored by the Anguilla Tourist Board.