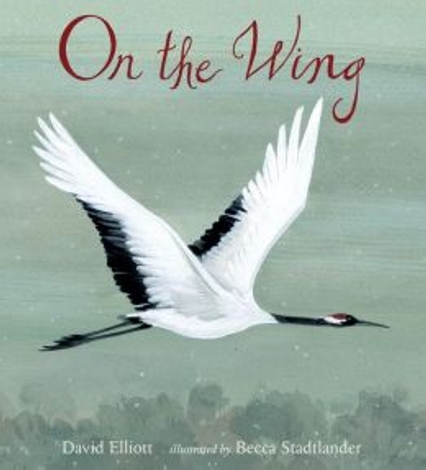 I’ve heard more than one person say lately—because I like to read about picture books and about both those who make and those who appreciate them—that it’s hard to believe anyone would complain about the cost of a picture book. A price tag of, say, $17.99 might seem like a lot for a book, but as these people noted, in many instances you’re getting to see true works of art in the illustrated pages. (Many but not all instances, because let’s face it: Some illustrations are better than others.) Twenty bucks or so is rather a bargain for such an art gallery, one that a child can visit again and again. And, I might add, for those who can appreciate this but still can’t afford them, there’s always the local public library.

The two picture books I write about today, which both happen to be poetry collections about animals, fall into this category. They’re both so elegantly designed and the illustrations so exquisite that they are a wonder. On shelves now is David Elliott’s On the Wing, illustrated by Becca Stadtlander, and coming in early November will be Joyce Sidman’s Winter Bees & Other Poems of the Cold, illustrated by Rick Allen.

David Elliott is a talented and fairly prolific writer and poet. On the Wing is dedicated to illustrator Holly Meade, a Caldecott Honor recipient (1997) who passed away last year at the young age of 56. Meade had illustrated three of Elliott’s previous poetry collections, each of them well-crafted in every way—On the Farm, In the Wild, and In the Sea. Elliott has a keen eye for the natural world and captures it well in poems. And Meade’s illustrations? Beautiful. It remains a huge loss to the illustration world that she’s no longer with us.

On the Wing is a collection of poems celebrating those creatures who take to the sky—fitting then that it’s dedicated to Meade. A wide variety of birds the world over are given the spotlight here—hummingbirds, crows, the Japanese Crane, the Great Horned Owl, cardinals, puffins and many other birds in between. There are poems humorous (“Who / spilled / the / paint?” is the entirety of the Macaw’s poem); contemplative (“The Andean Condor” asks what mysteries this majestic bird harbors); and a little bit mind-blowing (such as when the sparrow is referred to as the “small cousin of tyrannosaur”). These are pleasing rhymes for the younger set, the very short and sweet poem about the Puffin and its beak a great example of this.

This is Stadtlander’s debut as a picture book illustrator. She was evidently raised in Kentucky—woo hoo! says this Southerner—and now lives in Rhode Island. Her gouache illustrations are sharp and precise. There’s not an overly cutesy, anthropomorphized creature in the bunch. That would have just been all wrong for this book.

If I could snap my fingers and make Joyce Sidman’s Winter Bees available to the world now, I would. This one is superb in every possible way. And Sidman and illustrator Rick Allen aren’t new to collaboration either. Their 2010 picture book, Dark Emperor & Other Poems of the Night, was awarded a 2011 Newbery Honor, as well as a Boston Globe-Horn Book Honor.

Sidman brings readers a variety of poetic forms (couplet, free verse, pantoun and more) about creatures and how they adapt to the cold. Well, I say creatures, but there’s a lovely meditation on a snowflake, as well as the poignant “What

Do the Trees Know?” (“To bend when all the wild winds blow. / Roots are deep and time is slow. / All we grasp we must let go.”) Each poem is accompanied by a block of informational text about the subject of the poem. Who knew that hibernating is called bromating for reptiles? Not I.

Sidman, one of this country’s most gifted poets and certainly one of children’s literature’s finest, is in top form here. She spins sparkling and vivid metaphors: the “yodel of flight” that is the tundra swan; “the sun’s pale wafer”; the “eyelash legs” and “tinsel wings” of winter bees; and beavers as “strong brown bullets.” She conveys a variety of moods in these poems. There’s a light-hearted, kick-your-heels ditty from a moose cuddling with his mama, something to which very young human creatures can relate; a spirited ode to the playful yet co-dependent relationship between ravens and wolves; and the very funny (depending on how dark your sense of humor is) spotlight on a vole in winter, rhapsodizing about his insulated home of snow only to find a fox cut short his rapture.

Allen’s textured linoleum block prints are simply stunning. Many spreads put readers up close, right in the thick of the action, and he plays with perspective in thrilling ways: Readers look up right at a big brown moose, explore under the ice with beavers, and gaze up into the heavens at a majestic tree. Observant readers will spot a fox on nearly every spread, and this book—hands down—has the cleverest, most beautiful front and endpapers I’ve seen all year. Also don’t miss Allen’s very funny, tiny-print copyright page note about creating the art.

Here’s to children’s poetry done well—and to the talented illustrators who bring us such exhilarating spreads.