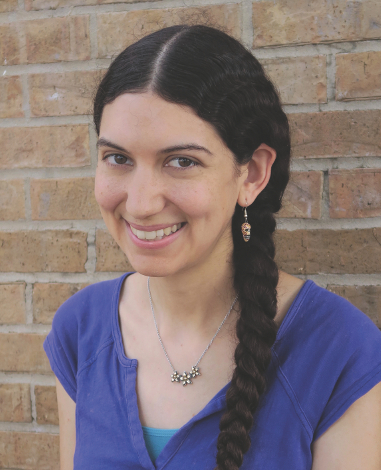 Anna Meriano loves kids’ books. In fact, they’re still the majority of what she reads. “At one point my mom was asking me, ‘When are you going to start reading real books?’ ” she recalls. “Never!”

She explains that she finds adult books generally less satisfying than the ones written for teens because they can be so hopeless. “With kid lit, I think you have more of a sense that it will kind of all be OK,” she says. “I think I still need to hear that. I don’t think that’s a message that only kids need to hear.”

It was a good thing, then, that she ended up at the New School’s MFA for Writing for Children. (Her college adviser had fruitlessly cautioned her not to mention her aversion to literary fiction in her applications.) There, she met two alums, Sona Charaipotra and Dhonielle Clayton, who were looking for a Texan writer of Mexican descent to work on an idea their packaging company, Cake Literary, was developing. Meriano was a perfect fit.

The result of that collaboration is Meriano’s first novel, A Dash of Trouble, which tells the story of how Leo, short for Leonora, discovers that her four older sisters, aunt, and mother are all brujas who cast spells in the family bakery. Feeling left out, she decides to try some magic of her own, and—as the title suggests—trouble ensues.

“I just really, really loved the concept behind it,” Meriano says, “the idea of an 11 1/2-year-old girl discovering that she has magic powers, because that’s all the books I loved growing up.” She mentions Matilda as a major inspiration, and Meriano’s novel shares that book’s escalating high jinks and creative use of magic (though it maintains a much warmer tone). There’s also the famous boy with a lightning scar who received an owl summoning him to Hogwarts on his 12th birthday.

However, A Dash of Troubledeviates from these stories in one major way: its setting. Unlike provincial England, Rose Hill, Texas, is full of a diverse cast of characters, including Mexican, white, and Vietnamese families. Meriano’s small town may defy most stereotypes of life in Texas, but she insists that it reflects her own experiences. “I don’t know any cowboys,” she jokes. After all, she’s lived most of her life in Houston, which is a relatively liberal, extremely diverse metropolis located in a swamp.

The representation Meriano struggled with most was creating Leo’s Mexican family. “I was like, ‘Can I do that? Am I allowed?’ ” she says. Meriano herself is of mixed descent, with a Mexican father and Irish mother, and she worried that she wouldn’t be able to accurately portray Leo’s experience or would  inadvertently offend readers. Charaipotra and Clayton encouraged her through the process and helped build her confidence. “It was really something I wanted to write,” Meriano says, “but I might not have been brave enough to do it on my own.”

One part of the book that Meriano really didn’t have any experience with was the baking. She researched the pastries by visiting her local panaderia and trying out the different treats. (She’s discovered that conchas, simple seashell-shaped buns with a sweet cookie crust, are her favorite.)

Nonetheless, she’s planning to give the recipe for the book’s adorable porquitos a try one day soon. “I started watching the Great British Baking Show to see if I can maybe gain some skills,” she says.