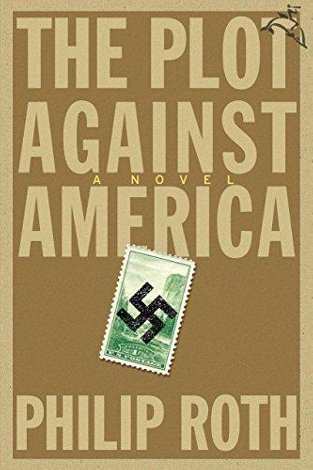 Excellent science fiction, fantasy and horror stories are being optioned for television and film adaptations faster than ever before. Fortunately, you have me to help you keep track of them all. Here are a dozen sf/f/h stories that you should read now before you see them onscreen…

The Plot Against America by Philip Roth

Roth's 2004 alternate history bestseller cuts to the core of science fiction by asking a "What if?" question: What if aviation hero and rabid isolationist Charles A. Lindbergh defeated Franklin Delano Roosevelt in the 1940 presidential election? In Roth's chilling story, Lindbergh cozies up to Hitler and his anti-Semitic ideals, the resulting consequences of which are seen through the eyes of an American working-class Jewish family. The only surprise about this politically-charged novel being adapted is how it's taken so long. Deadline reports that Roth's novel has been picked by HBO as a six-part miniseries. David Simon and Ed Burns (The Wire) are writing and executive producing.

Micro is the final novel of bestselling author Michael Crichton (Jurassic Park), which remained unfinished before his death and was posthumously completed by science writer Richard Preston (Crisis In The Hot Zone). This high-concept techno-thriller is about a group of seven graduate students hired by a mysterious biotech start-up and lured to Hawaii. Upon arrival, they are miniaturized, cast out into the rainforest and left to fend for themselves. Amblin Entertainment optioned this story and assigned screenwriters Neil Widener and Gavin James (Battle of Alcatraz) to write the screenplay. Given Crichton's adaptation appeal, I would expect Micro to appear on the big screen sooner rather than later.

The Many Worlds interpretation of quantum mechanics states that for every decision one can make, a new reality is created, resulting in countless alternate worlds. That's the premise adopted by Dissonance, a romantic thriller about Delancey, a young woman who can navigate between these parallel realities. After a mishap, she is forbidden from doing so; but it's in those alternate realities where she wants to go. That's where Simon, the guy she pines for, expresses a similar affection. Director Catherine Hardwicke, no stranger to romantic speculative fiction (she directed Twilight), has signed on to direct the film adaptation of O'Rourke's story.

The Wandering Earth by Liu Cixin

Chinese film audiences were the first to see the big-budget adaptation of a short story by Liu Cixin, available to U.S. readers in the collection of the same name, and now that the distributor has secured international rights, U.S. audiences can, too, starting this month. The dire setting of Cixin's story is the distant future in which our Sun is on the verge of exploding and ending all life on Earth. A group of astronauts undertake a mission to find a new home planet for the human race.

As he proved with his superb survey of 70s and 80s horror novels, Paperbacks from Hell, Grady Hendrix knows vintage horror. My Best Friend's Exorcism is his own glorious trip into the days of yesteryear's horror. It takes place in 1988, when some high school friends, including Abby and Gretchen, spend a night in a cabin in the woods, after which Gretchen starts acting strangely. (Spoiler-but-not-a-spoiler: she's possessed by the devil.) Hendrix's fusion of teen angst, 80s pop culture, and the power of true friendship is a treat. That's certainly what the production company Endeavor Content thought when they bought the film rights. Jenna Lamia will write the screenplay with Hendrix himself acting as a consultant.

Hold Back The Stars by Katie Khan

Khan's novel is the stuff suspense is made of. After a freak accident, a young couple (Carys and Max) are left adrift in the vast emptiness of space. Left with nothing but each other and only ninety minutes-worth of oxygen, they contemplate the world they left behind (where everyone looks out for number one) and may never see up close again. When a chance to save one of them arises, who will take it and who will make the ultimate sacrifice? This Romeo & Juliet meets Gravity premise was too enticing for Hollywood to pass up. Mike Cahill will direct a forthcoming film version written by Christy Hall. John Boyega (Star Wars: The Last Jedi) and Letitia Wright (Black Panther) have already been cast in the lead roles.

The Riftwar Saga is a fantasy series that is itself but one part of Raymond E. Feist's vast Riftwar Cycle, an epic story of human magicians and other creatures on the planets Midkemia and Kelewan who are able to create rifts between planets in different solar systems. The Riftwar Saga books (Magician, Silverthorn, and A Darkness at Sethanon) is the first part of that cycle. In it, peace on the Kingdom of the Isles is destroyed by mysterious invaders from another world. It's up to a young magician named Pug and his warrior friend to help save the land. BCDF Pictures scooped up the rights to Feist's blockbuster franchise and hired Kurt Johnstad (Atomic Blonde) to write the screenplay for the first film Magician (comprising the first two books as they were released in the U.S.).

The Witchlands by Susan Dennard

Susan Dennard's Wicthlands series—currently comprised of the books Truthwitch, Windwitch, and Sightwitch—is a young adult fantasy series set on an unstable continent where war is looming and many different kinds of magic is possible. Safiya and Iseult are two young witches who often find themselves in trouble: Safiya is a Truthwitch, able to tell truth from lies; Iseult is a Threadwitch, able to see the invisible ties that bind the lives around her. Together (and with the help of a cunning Prince) they must keep the enemies at bay. As reported in the October 2018 issue of Locus Magazine, Film rights to The Witchlands series were optioned to the Jim Henson Company for a television adaptation. Susan Dennard will act as co-executive producer and Jim Henson's Creature Shop will make the creatures.

Chronicles of Narnia by C.S. Lewis

Despite the not-too-distant film adaptation of C.S. Lewis's classic Chronicles of Narnia fantasy series (or, at least the first three books, between 2005 and 2010), Netflix is moving ahead with their own series adaptation. The difference is that, instead of straight book-to-TV adaptations, the streaming service is reportedly creating multiple series and film projects as part of a multi-year deal. All will be derived from Lewis's much-loved fantasy series about the magical land of Narnia, populated with all manner of mythical beasts, and how humans have been called upon to play pivotal roles in its history.

Her Body and Other Parties by Carmen Maria Machado

How does FX plan to adapt Carmen Maria Machado's eclectic debut collection of short stories? With an anthology television series of course! Each episode of this proposed weekly series will focus on a different story of the collection, which features stories that examine women's fears through a fabulist lens. It's being described as a feminist version of Black Mirror. Her Body and Other Parties was a finalist for the National Book Award and the 2017 Kirkus Prize; this series promises to be equally remarkable.

Clockwork Lives is the literary half of a combined book and music project by author Kevin J. Anderson & Neil Peart, drummer and lyricist for the rock band Rush. This steampunk adventure revolves around the rivalry between "a rigid Watchmaker who controlled every aspect of life, and his nemesis, the ruthless and violent Anarchist who wanted to destroy it all." Like the best adventure steampunk, it offers excitement by way of airships and alchemy. Anderson himself recently revealed that Clockwork Lives has been optioned for film and TV to writer/producers Benjamin Raab & Deric A. Hughes (Arrow and The Flash).

Every small town has its secrets. The one in Partridge's creepy 2006 horror novel is no exception. It's Halloween night in 1963 in a small midwestern town, the night of their annual ritual. For five days, every boy between the ages of sixteen and nineteen has been locked up. Tonight, they are let loose; armed, dangerous and on the hunt for the blood of the legendary October Boy, a reaper with a pumpkin head that comes from the cornfield. If any of the boys can catch and kill the creature before it reaches the safety of the church, he wins a coveted ticket out of town…but maybe not before learning the town's darkest secret of all. This award-winning novel sounds super-creepy (read an excerpt here), I hope that New Regency, who acquired the feature film rights to the novel, will live up to the expectation.