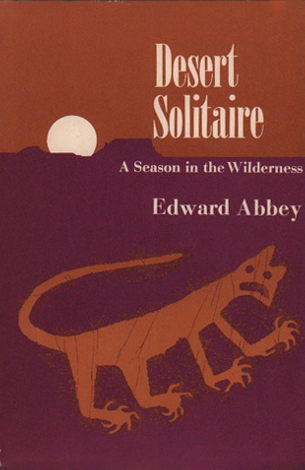 “This is the most beautiful place on earth.” So opens Edward Abbey’s Desert Solitaire, the greatest literary celebration the slickrock country of southeastern Utah, its epicenter the once-tiny town of Moab and nearby Arches National Park, has ever known. Having made that sweeping declaration, Abbey adds that every man and woman carries within a vision of his or her most beautiful place on the planet, be it a houseboat on a lake in Kashmir or a street scene in Brooklyn. For Abbey, though, it was that dry, stony, stark slice of the Four Corners, “the red dust and the burnt cliffs and the lonely sky—all that which lies beyond the end of the roads.”

When it was published in 1968, Desert Solitaire found instant recognition as a desert classic. Abbey always complained that the media of the Eastern Establishment, the New York Times and Atlantic and, yes, Kirkus Reviews, never took his work seriously, but in fact the book was widely reviewed and widely liked (for the record, Kirkus called the book “a fond, but not sanguine look at the wilderness by someone who appreciates what conservation means”).

There were two more effects: Desert Solitaire quickly became a bible of outdoor-minded readers, who poured into southeastern Utah to dig the desert places that Abbey had exalted, and it inspired a new generation of environmental activists who took the book and Abbey’s pronouncements as an extended mantra for protecting the wild country, among which is this elegant formulation: “Wilderness is not a luxury but a necessity of the human spirit, as vital to our lives as water and good bread. A civilization which destroys what little remains of the wild, the spare, the original, is cutting itself off from its origins and betraying the principle of civilization itself.”

Abbey, ever the coyote, pulls a few tricks in Desert Solitaire. For one thing, despite the title, he was living with a wife and children while doing his tour of Arches and later writing his book. For another, “a season in the wilderness” is a composite of several seasons, some of them happier than others. In strictest terms, it’s an idealized memoir—but when read with the understanding that it’s not the gospel truth, which continues to surprise some of its fans, it becomes a hallmark of American environmental literature, as firm in the pantheon as Walden and Silent Spring.

Desert Solitaire is timeless, but it’s also a product of a time in which the smoggy cities were all the smoggier because of burning buildings and tear gas. In an extended contrast, Abbey counterposes that “civilization” of desert places with the “culture” of urban rat traps, letting us know which he prefers. He adds, “Civilization is a youth with a Molotov cocktail in his hand; culture is the Soviet tank or the L.A. cop that guns him down.”

Tanks and cops are still much among us, and wild places are much under siege, which gives Desert Solitaire a constantly pointed edge. Half a century on, it’s a necessary book—and a call to arms against the enemies of wilderness and civilization, who are very much among us, too.