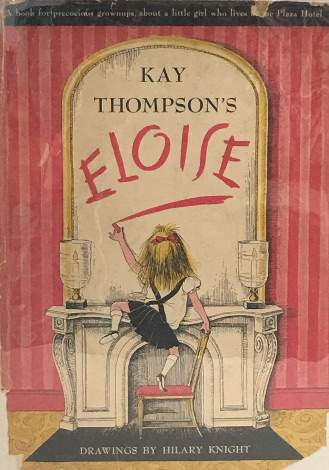 Eloise is “a city child,” as she calls herself. She is 6 years old. She lives the dreamlike life of royalty, or at least the American version thereof. A tolerant person would call her a scamp, an imp, playful and mischievous. A less tolerant person would call her a brat. The manager of Manhattan’s Plaza Hotel, where Eloise lives, calls her a nuisance, at least when she is tearing around in the lobby. And she is often in the lobby, escaping her Nanny, a formidable Englishwoman who wears bone hairpins and expresses the frequent wish that Eloise, a whirlwind of energy, wouldn’t talk quite so much.

Eloise came into the world by accident. (No, not that kind of accident.) She was the brainchild of a sometime jazz singer named Kay Thompson. It was when she arrived late to a rehearsal that her creation popped out of her mouth to offer an excuse: “I am Eloise. I am six years old.” When Thompson went solo, she booked into a lounge in the Plaza, and there formed the seed of a story that would place that young girl at the heart of the busy hotel, wreaking havoc wherever she goes, adventures recounted in Thompson’s winsome book of 1955, simply called Eloise.

Eloise is privileged beyond belief. All she has to do is pick up the phone, and food magically appears: “three Pilsener Beers for Nanny and one meringue glacée for Eloise and charge it please Thank you very much”—oh, and a raisin for her pet turtle and a roast beef bone for her dog, too. But, stewed Nanny and stewed raisins notwithstanding, Eloise is also a Rousseau-vian child of nature. Her mother, a friend of Coco Chanel’s, is always kiting off to Paris or to Virginia with a gentleman friend, lost in a cloud of martinis and stock options. Mother is absent from the proceedings, which puts Eloise, otherwise sui generis, squarely in the kid-lit archetype of the orphan in all but name, making her way in the bewildering world.

Most of those literary orphans have it harder than Eloise; they have to wash the floors of the palace or sell matches out on the street. Eloise has instead just to skitter from floor to floor of the Plaza or else jet off to Paris or Moscow—two titular destinations of Thompson’s 1957 and 1959 sequels—in between phone calls to room service.

Thompson, who died 20 years ago, in July 1998, made a small fortune from the Eloise books, and she was a pioneer in marketing dolls and other Eloise-related merch. On the side, she coached Frank Sinatra and Marlene Dietrich in the fine points of singing, acted alongside Audrey Hepburn and Fred Astaire, and turned slacks into an object of desire for the women’s fashion cargo cult. She was a handful, and she was Eloise. And though Eloise’s world is lost to all but the very fortunate, the book remains as aspirational as a Horatio Alger story, always in print and available to its intended audience: not children but, as Thompson insisted, “precocious grownups” who needed to get back in touch with their inner scamps. Or brats.