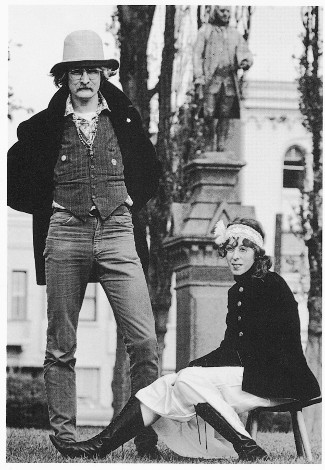 If you’ve ever cast a line in some fine stream in quest of the elusive Salmo trutta, such as the wily German browns who live out my way, then you already know this truth: most trout are smarter than most people.

And then there’s Trout Fishing in America, Richard Brautigan’s hippie ur-text, published on Oct. 12, 1967, as the Summer of Love was fading and a new, more terrifying time was on the horizon. Born in 1935, he had written the book, a mishmash of fiction, poetry, and sort-of-essay, fully six years earlier, bespeaking his real identity as less a hippie than a last-wave member of the Beat Generation, and indeed the poetry of his book—technically, his first novel—is a kind of onrushing staccato rap that would do Jack Kerouac proud:

“Maybe trout steel. Steel made from trout. The clear snow-filled river acting as foundry and heat. / Imagine Pittsburgh. / A steel that comes from trout, used to make buildings, trains and tunnels. /The Andrew Carnegie of Trout!”

The Andrew Carnegie of trout? Well, it makes sense, if you take Brautigan’s word that it was an old drunk way back in the storied summer of ’42 who put it in Brautigan’s head that trout were a kind of “intelligent metal.” So why wouldn’t a bright teenager want to go seek out those silver bullets of soulful understanding for himself? Brautigan, or at least the character called Brautigan, takes to the road, creel and rod in hand, pondering the ways of the fish and all the many, many ways in which they can meet their end in this cruel world: through pollution (for in those days before the EPA, many of the trout-bearing rivers of this country were foul beyond belief), through capture, through the ministrations of osprey or cougar or grizzly bear, through old age.

There’s only one way in which trout should not die, writes Brautigan, foreshadowing his own end: “It is against the natural order of death for a trout to die by having a drink of port wine.”

Trout Fishing in America was published in that early fall 50 years ago, and it became a zeitgeist-y accessory on every hippie’s bookshelf. A band later took up the name, releasing a couple of dozen records. Where I grew up, just outside of Washington, D.C., it became the moniker of an underground anti-war group, known just as TFA, which, like Zorro, left its mark on bridges and buildings. It was less a book, way back when, than a cultural phenomenon.

I spent time in Livingston, Montana, a few years after Brautigan ended his life there. Thanks to friends of his, I was able to stick my head in the door of the house he lived in, complete with bullet holes in the ceiling where he’d occasionally direct a pistol shot, gunning for the invisible trout of the air. That’s trout fishing in America, too. It’s a rich tradition, and, like all other things in America, it can get weird in a heartbeat.