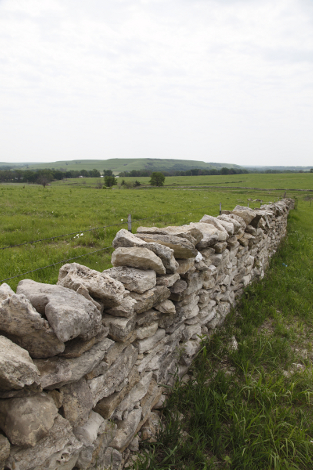 Watch out for the rocks!

Every seven years, in a small New Hampshire town called Albany, local officials—for even a town of 735 inhabitants requires governance—walk its boundaries, clearing brush, cleaning up markers, and checking to see whether a neighboring, larger town might just be creeping into their territory. For its part, that neighboring town is doing just the same thing, lest Albany be perfidious.

Those are the ways of a godly people, people who prize civic decorum and who have made a kind of ritual of that one way of being orderly. So it is in another small town, one that we imagine to be in New England, just half the size of Albany. There, on a late June morning, the townspeople gather, as they have done since anyone can remember. A man named Summers passes among them, carrying a beat-up black box that “grew shabbier each year,” followed by a man named Graves, carrying a three-legged stool on which the box, filled with slips of paper, is placed.

Ominously, in the second paragraph of Shirley Jackson’s story “The Lottery,” small boys have been busily filling their pockets with stones, anticipating what is to come. Grown-ups eventually thwart this act of disorder by cordoning off the remaining pile of rocks even as the villagers pass the time talking of “planting and rain, tractors and taxes.” Some of them whisper that the neighboring towns have done away with the lottery that is about to begin. But not their town: No, they will remain faithful to the old ways even if the contest is one whose victor, so to speak, will pay for drawing the winning ticket with his or her life. That act of expiation and sacrifice will ensure continued prosperity for the rest of the village; as one wizened old-timer says, “Lottery in June, corn be heavy soon.”

Though it appeared in the quiet season of early summer 70 years ago, “The Lottery” is a perfect story for Halloween, and countless subsequent horror stories have looked to it for inspiration, not least the works of frightmeisters and fabulists such as Stephen King and Neil Gaiman. “The Lottery” was once heavily anthologized, in a time when Americans were not so easily offended by critical mirrors held up to our mores, and widely read in middle school and high school. It is less read today, and, in any event, it met with plenty of criticism when it first appeared in the June 26, 1948, issue of the New Yorker. By Jackson’s reckoning, some 300 letters arrived at the magazine, only a dozen or so favorable, the others accusing her of crimes ranging from sorcery to Stalinism and everything in between.

Shirley Jackson would go on to write other stories, many of them just as strange and beguiling as “The Lottery.” Her 1959 novel The Haunting of Hill House, an adaptation of which debuts this month as a Netflix series, is considered one of the scariest horror stories ever written. But it’s a supernatural tale, far removed from “The Lottery,” which, as even good and godly people know, is all too real.