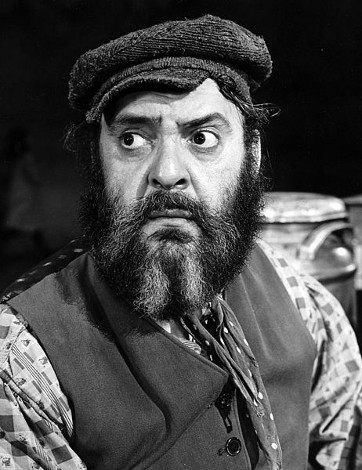 Zero Mostel in the 1964 production of Fiddler on the Roof.

It is almost never a winning proposition to argue with God. He tends to be jealous of his position and sure, as you might expect, of the rightness of his cause, whereas the bargainer down below tends always to miss some tiny point in the fine print and to pay dearly for the lapse.

Just ask Job. Or ask Tevye the milkman, the rumpled familiar of Anatevka and other shtetls in what is now western Ukraine, a place of terrible memory for all people this Passover season and all Passovers to come. Tevye is the classic shlimazel, always pressing what little luck he has, always angling to become just a touch more comfortable in a world in which the off chance to “bring home a fresh loaf of bread or at least a baked roll” is a big deal.

Tevye may be kin to Job, but he is also as wily and good-natured as Charlie Chaplin’s Little Tramp. If he has an ever so slightly criminal streak, and if he just can’t stop arguing with God, it is always for the best of intentions. As he says to his daughter Tzeitl, no slouch as a bargainer herself, he does so for his family first. “Am I complaining? Am I blaming you?” he asks her. “It’s just that whenever I feel miserable and wretched, I pour my heart out to the ruler of the universe about the way he deals with me.” He adds, resignedly, that there must be good reason for the ill treatment, since God, after all, is just—or so they say, anyway.

Tevye is adrift and about to be more so—for, as his creator, the brilliant writer and humorist Sholem Aleichem, knew, times were rapidly changing for the Jews of czarist Russia. Tevye came into being in 1894, just at the time, as Orlando Figes observes in his new book Revolutionary Russia, that the Romanovs began to spiral toward their last days. That end would take a couple of decades, though, and meanwhile, the forces of reaction would visit blame and wrath on the Ashkenazim, millions of whom would soon flee into uncertain exile to America and elsewhere around the world.

Though Aleichem, himself an emigrant to New York, where he died in 1916, was well-known to readers of Yiddish, Tevye was mostly confined to shtetl and tenement until half a century ago, when the stories

gathered in Tevye the Dairyman were turned into the book for the rousing musical Fiddler on the Roof. The image of the fiddler was Marc Chagall’s, not Aleichem’s, but never mind: Tevye roared into the larger American popular culture thanks to Zero Mostel, who gave him a presence so vivid that it threatened to overwhelm the camera when it came time to put the play on film.

The gap-toothed Israeli actor Topol caught Tevye at his shrewd best there. The film, like the musical, however, downplayed the worst of Tevye the milkman’s travails. With Ukraine so much in the news again, it seems a good time to turn again to Aleichem’s original texts and reflect on the strange, sometimes-terrible hands God deals.