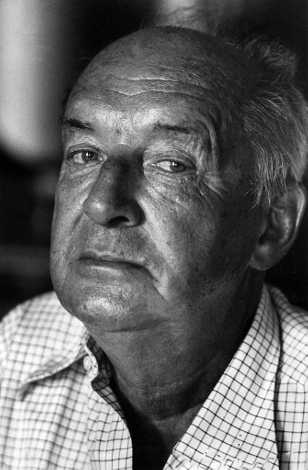 Born in Russia in 1899, Vladimir Nabokov grew up in immense wealth. He lost it all when the Bolsheviks came to power, and for the next two decades he stayed a step ahead of the secret police, fleeing both Berlin and Paris when the Nazis came, steering clear of Soviet agents. Along the way, scraping by giving lessons in English and, of all things, boxing—one wishes he and Ernest Hemingway could have found their way into the same ring—until landing a teaching job at Cornell (one of his students, who learned his lessons well, was Thomas Pynchon), Nabokov managed to write several extraordinary novels: the chess metaphor Real Life of Sebastian Knight, the splendid émigré intrigue The Gift, the sardonically complex Pale Fire, and more.

And then there is the book for which he remains best known—infamous, even. In 1954, Nabokov wrote to James Laughlin, the publisher at New Directions, and offered him a “timebomb” of a novel that he had just finished writing. Now, Nabokov had not just been teaching literature and writing books, but also pursuing a third parallel career as a lepidopterist, crisscrossing the United States chasing after rare butterflies and moths, logging thousands of miles in remote places. That “timebomb” was not just a road novel, not just a book that satirized American culture’s worship of “the ideal consumer,” but a book that, controversially then and now, centered on the obsession of a middle-aged man for a girl not yet a teenager when the story begins.

Laughlin declined. So did an editor at Viking Press, writing, “we would all go to jail if the thing were published.” Another editor quit over the refusal of his boss to consider “the thing.” It did not help the book’s salacious reputation that it was finally first published in Paris by the renowned dirty-books house Olympia Press. Finally, once it cleared the censors, Putnam’s published it in 1958.

Lolita sold and sold, for a time. It offended, for how could such a premise, no matter how literary the intent, fail to offend? But then readers, perhaps disappointed that the book was less prurient than picaresque, drifted away. Only 10 years later, a scholar writing on Nabokov’s dwindling reputation noted that most of the criticism devoted to Nabokov centered on his potboiler, adding, “a good deal of this comment on Lolita can at best be described as quasi-literary, dealing as it does with the question of whether the novel is pornographic or not.”

That question remains. It seems a shade unjust, though surely a problem of his own making, that Lolita should overshadow the rest of Nabokov’s work, a group of novels that, difficult and obstinately multilayered, make those of David Foster Wallace and even Pynchon seem schematic.

Vladimir Nabokov died 40 years ago, on July 2, 1977. His books await rediscovery in a time that begs for satire and skewering: few mysteries are as elusive as Despair, few literary memoirs are as searching as Speak, Memory, and few literary novels as unsettling as, yes, Lolita.