Are You Ready for June's Spectacular Lineup of Science Fiction, Fantasy and Horror Books? 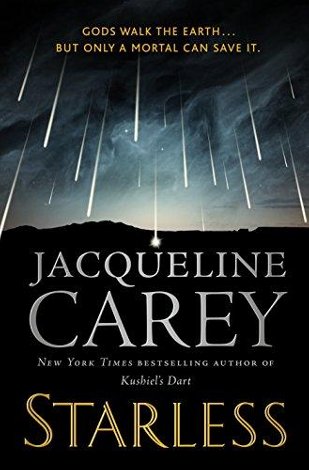 Looking for the perfect Summer read? Look no further than the science fiction, fantasy and horror bookshelves, where you will find all sorts of stories that will keep you turning the pages. This month's sf/f/h book lineup includes a surrealistic space opera that will blow your mind and stories about the weird west, artificial intelligence running amok, a supernatural beast living below New York City and more.

If you are even remotely interested in urban fantasy, you've undoubtedly heard of Butcher's popular Dresden Files series, which recounts the adventures of Chicago's favorite private investigator and wizard Harry Dresden. You may think that the fifteen novels making up the series are all the tales there are to tell. Not true! Butcher has written a handful of smart short stories and novellas aimed at entertaining fans and newcomers. Brief Casescollects these twelve stories for readers in one convenient package.

In this standalone historical fantasy, the stars were long ago exiled from the sky and sent to Earth to live as gods, prolonging their lives via the use of special seeds. But the supply of those seeds is running low. To get more, it is foretold, King Azarkal's daughter, princess Zariya, must marry a foreigner. This is troubling for Khai, who was chosen at birth to serve as her shadow, trained by warriors and assigned to protect her. As Khai approaches adulthood, secrets are learned that upset the nature of things. Meanwhile, the power of the dark god Miasmus is growing and he wants nothing less than wholesale destruction.

In this tenth annual edition of the field's best short horror fiction, award-winning editor Ellen Datlow has assembled a tasty collection of twenty one terrifying and unsettling treats. In addition to providing excellent fiction to read, this is the perfect book for discovering new authors and enriching your life through short fiction.   This year's volume, which showcases the best fiction first published in 2017, features stories by Mira Grant, Brian Hodge, John Langan, Carmen Maria Machado, Kelly Robson, Kaaron Warren, A. C. Wise and more.

If you like the Weird West, then check out the gripping conclusion to The Devil's West Trilogy. (You've read Silver on the Road and The Cold Eye, right?) Here, Isobel (also known as the Devil's Left Hand) and Gabriel ride through the magical land of the Territory, rooting out evil by way of "mad magicians, ghosts, and twisted animal spirits." They arrive in the free city of Red Stick to find tensions running high and tempers running hotter as the homesteading population grows, crowding the native lands. There's also a sickness running through the town, one that will cause her authority to be challenged.

Close Your Eyes by Paul Jessup

If you're looking for a brilliantly bizarre and wonderfully weird space opera, you just found it. This is a story about Ekhi, an unexpected passenger on a scavenger ship. The ship's dysfunctional crew includes its centuries-old captain who, nearly withered away to nothing, runs the ship from her preservation tank and runs the ship via drone and fabricated wax dolls; and the ship's navigator, Mari, who is missing half the flesh from her face and has her exposed skull merged with metal. As if that weren't surreal enough, know that Mari's metal-cage skull houses butterflies and Ekhi has been impregnated by a supernova. It may sound ridiculous, but Jessup makes it work. The main threat the crew faces is a "linguistic virus" that spreads itself by forcing its victims to utter a certain contagious phrase that kills the listener in a gruesome way. [Shivers]

Another fantastic trilogy comes to close. The Machineries of Empire series, which began with Ninefox Gambit and Raven Stratagem, concludes with Revenant Gun. Over the course of the series, we've seen Captain Kel Cheris face insurmountable odds against enemies on behalf of the hexarchate and deal with an undead traitor general named Shuos Jedao. In Revenant Gun, Shuos Jedao wakes up with the memories of a seventeen-year-old cadet despite him having a body of a man that's decades older. This Shuos Jedao has no recollection of ever being a soldier and no memory of his dark and brutal past. Will that be enough to follow his orders and conquer the fractured hexarchate itself?

The Robots of Gotham by Todd McAulty

In the United States of the year 2038, the development of artificial intelligence is outlawed. Even so (or perhaps because of this), America lost a short, nasty war against robot-led fascist countries. One quarter of the country is under foreign occupation and Manhattan has been annexed by a weird robot monarchy. When Canadian businessman Barry Simcoe arrives in Chicago on business, he is attacked by a rogue war machine…an event that thrusts him and an unlikely group of heroes into the role of savior when it is learned that the machines plan to unleash a plague to wipe out all of humanity. McAulty combines believable fears of artificial intelligence running amok with a dark future America in this thrilling debut.

Awakened, written by James S. Murray (yes, the guy from truTV's Impractical Jokers) and veteran sci-fi and horror writer Darren Wearmouth, is a supernatural suspense novel about a new subway line in near-future New York City, the opening of which attracts high-profile people like the U.S. president. The bad news is that it unearths an ancient dark horror. The trouble is first discovered when the express train's initial run arrives at its destination. All of the train's cars are found to be empty and drenched in blood. The tag line of the book says it all: "There's something living beneath New York City, and it's not happy we've woken it up."

This intriguing period piece, set in an Edwardian England recovering from the wounds of World War I, posits the existence of cabals of noble families who use their unique magical gifts to control the fates of nations. Miles Singer, a magical healer doomed to serve as his family's pawn, tried to escape his destiny by joining the army and using his abilities to heal, albeit secretly lest he be confined to an insane asylum. After faking his own death and assuming a new identity, Miles continues to use his healing powers at a veteran's hospital. But when he comes across a fatally poisoned patient, he must risk exposing his true self—and incurring the wrath of his family—to uncover what really happened.

Imagine an alternate history that includes the discovery of Summerland, a metropolis for the recently deceased. Rajaniemi's imaginative tale does just that; it imagines an alternate 1938 where murder is obsolete, or at least just a stepping stone to the easily accessible afterlife. The British Empire saw opportunity there and has since placed spies in Summerland. They're not the only ones. The Soviets also have spies in Summerland and they also possess the desire and the technology to build their own god. Enter Rachel White, an SIS agent who gets a lead on one of the Soviet moles in Summerland and must go rogue to bring him in.

The Book of M by Peng Shepherd

This thought-provoking debut novel asks what it means to be human by exploring the value and essence of memories. In this post-apocalyptic novel of a different color, people inexplicably begin losing their shadows. When they do, they gain a strange new power. The cost, however, is the loss of all their memories. As society learns how to cope with "The Forgetting" in a world that becomes increasingly unrecognizable as the shadowless remake the world from scratch, an unafflicted husband sets out to find his wife after her shadow disappears and she begins to forget.

The Cabin at the End of the World by Paul Tremblay

In this psychological horror, a family is vacationing at a secluded cabin on a quiet New Hampshire lake. As the seven-year-old girl named Wen is playing outside, she is approached by a stranger. Soon, three more strangers appear, each carrying odd looking objects. One of the strangers tells Wen, "None of what's going to happen is your fault." What starts as a taut home-invasion story ratchets up the suspense even more when strangers claim that they need Wen's help to save the world. Unfortunately, that help entails great sacrifice.

Peter Watts is not known as an author who shies away from mind-blowing ideas. Case in point: The wonder-packed Freeze-Frame Revolution in which Sunday Ahzmundin, a crew member on a construction ship that spends 66 million years (objective time) building interstellar wormhole gates, drops in and out of periodic suspended animation as determined by Chimp, the ship's AI. At any given time, only a handful of crew members are awake. Sunday becomes aware of strange things going on within the ship, like crewmembers who go missing. She soon learns that a rebellion is brewing. Which begs the question: How do you stage a mutiny when you're only awake one day in a million?

In A Big Ship at the Edge of the Universe, the bold start of a brand-new science fiction adventure series called The Salvagers, a crew of outcasts tries to find a legendary ship that could be their salvation and the key to savings the universe. Leading the charge are Boots Elsworth, a famous-but-washed-up treasure hunter who sells fake legends to the highest bidder, and Nilah Brio, the top driver in the Pan Galactic Racing Federation she is framed for the murder she witnessed. Both women are on the wrong side of the law, so they board a smuggler's ship that will take them on a quest for fame, for riches, and for justice…which they hope to find on the Harrow, a famous warship, capable of untold destruction

…AND EVEN MORE SHORT FICTION…

In addition to the Brief Cases collection and The Best Horror of the Year Volume Ten anthology mentioned above, this month's selection of can't-miss short fiction collections and anthologies offer extra hours of sumptuous reading: