Atomic Robo: The Temple of Od 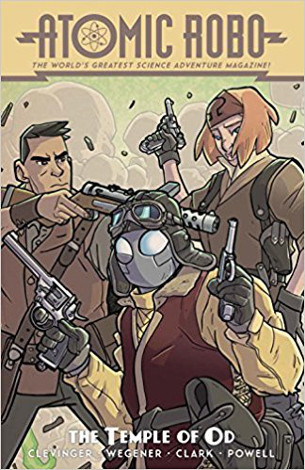 If you’re not reading Atomic Robo, you are really missing out.

Created by Brian Clevinger and Scott Wegener, Atomic Robo follows the time-spanning adventures of a sentient robot created by Nikola Tesla. I say ‘time-spanning’ not because he travels through time, but because each story is set in a different time period during his very long life. The series is really well written, drawn, and well worth your time if you’re into science fiction and adventure stories. With that said, today I wanted to take a look at a specific book: Atomic Robo: The Temple of Od.

Filled with tons of nods to Indiana Jones and the Temple of Doom, Temple of Od is a magnificent book. Robo is a wise-cracking adventurer working to help combat threats of a more scientific nature during the beginning of World War II. He’s sent to Shanghai in 1938 where not only does he meet a local contact who looks exactly like Short Round from Temple of Doom (played by actor Jonathan Ke Quan, also famous as Data in The Goonies), he’s also directed to a club called Anything Goes. Only thing missing? Kate Capshaw belting out the song.

Robo is on the trail of China’s top quantum physicist who was taken by the Japanese Army when they invaded. Intel suggests he’s being used to develop a new ‘zero-point’ energy weapon, and it’s up to Robo to meet up with the local resistance to find and free him. Things go sideways when the club is raided and Robo has to escape into the desert with Helen ‘The Nightingale’ McAllister, an adventurer in her own right, and an old girlfriend of Robo’s. Unfortunately for Robo, she’s dating the head of the resistance, Chen Zhen, making for an awkward if ultimately amusing love triangle–of sorts.

When super-powered Japanese soldiers appear, Robo finds his usual advantage over humans–super strength, speed, and near-invulnerability–isn’t quite enough to stop them. He’s going to need help from Helen, Chen, the resistance, a mysterious group of mercenaries calling themselves the ‘Ghost Bandits,’ and the man who started all of this in the first place–Doctor Lu Huang, the missing Chinese quantum physicist.

Talk about a rip-roaring adventure! This book is amazing. It’s a better Indiana Jones move than that one with the crystal skulls….The humor is spot on, and comes through in the dialogue–which never misses a beat. The story hits all the right notes as far as worldbuilding, characters, plot, tension, etc. The Ghost Bandits are comic relief in a story filled with comic relief, which just means they take it that much more over the top and I loved it.

The art reminds me of The Last Airbender; it’s that kind of style, simple yet very expressive. The coloring is muted and it works well. I also

like the ties to scientists like Einstein and Tesla, and the real-world feel of 1938 and a world on the brink of war. Excellent job there. I mentioned Indiana Jones, but it also calls back to adventure serials from those days, and reminded me of a TV show I loved as a kid: Tales of the Gold Monkey.

You can tell that the writer and artist know their characters and world very well. Also, that they have a lot of fun crafting these books, because it comes through on each and every page.

I think this book will work great for just about everyone, and encourage you to check it out, and then the other books in the series as well.

Patrick Hester is an author, blogger and two-time Hugo Award Winner. He lives in Colorado, writes science fiction and fantasy, and can usually be found hanging out on his Twitter feed - @atfmb. His novel, SAMANTHA KANE: INTO THE FIRE is available at all major retailers. His short fiction can be found in the anthologies Space Battles: Full-Throttle Space Tales #6 andAn Uncommon Collection, as well as the eBooks Conversations with my Cat, Witchcraft & Satyrs, Consumption, Cahill's Homecoming and Cahill's Unfinished Business. His Functional Nerds and SF Signal weekly podcasts have both been nominated for multiple Parsec and Hugo Awards.