Beating the Drum for Women's Rights 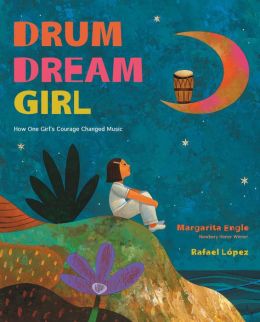 Once upon a time, there lived a young girl who loved drumming so much that at the age of 10 she joined her sisters’ dance band. Such a story may not seem remarkable, but it is if you were Millo Castro Zaldarriaga, who was of Chinese, African, and Cuban descent and lived in Cuba. Cuba may be “an island of music in a city of drumbeats,” as Newbery Honor author and poet Margarita Engle puts it in Millo’s story, Drum Dream Girl: How One Girl’s Courage Changed Music, on shelves just last month. But this was the 1930s when girls were told they could not be drummers. Millo “broke Cuba’s traditional taboo against female drummers,” Engle tells me in an email interview. “She opened the way for women drummers, who are common on the island today.”

Engle, who is Cuban-American and currently lives in California, presents the story in a pared-down and rhythmic verse: “When she walked under / wind-wavy palm trees / in a flower-bright park / she heard the whir of parrot wings / the clack of woodpecker beaks / the dancing tap / of her own footsteps / and the comforting pat / of her own / heartbeat.” The music,” Engle tells me, “led this story into a verse form. It needed rhythm, a tempo, and even a bit of rhyme.…Millo’s talent is boom boom booming!”

Pura Belpré Award-winning illustrator Rafael López’s sophisticated acrylic illustrations bring this story of one girl’s daring to vivid life. “I discovered Millo when I first read Margarita’s poetic script,” López tells me, “and immediately connected to the story. It reminded me of my own mother’s struggle to pursue her dreams in Mexico City.”

When asked about his research for the artwork in this picture book biography, López is quick to point to Engle’s words as the very “springboard to find Millo.…Margarita’s poetic style gave me the freedom to invent, and I wanted the pictures to encourage children to do their own dreaming.” His research began in the summer of 2013 in the basement studio of his home in San Miguel de Allende, Mexico. “I’m always driven to learn all I can about my character, using books and the Internet. I dove into 1930s’ Cuba, gathering photos of trees, foliage, carnivals and, of course, Millo, her sisters, and their band Anacaona. I grew up with three sisters and considered their relationships to each other when developing characters for this story. Images and words were pasted on mood boards, taped and tacked with magnets to the spaces around my desk. Growing up, I played different folkloric instruments and formed a band in junior high, playing guitar and the bombo, a drum from Argentina. Now I’ve got congas that I play whenever I walk by them. I moved them and my bongos into the studio, mixing drumbeats and brushstrokes.”

But San Miguel de Allende also plays a vital role in his artwork for this book. He wandered around the city, sketchbook and camera in hand, “searching for Millo.” Both the textures and colors of walls in the city reminded him in many ways of Cuba and found their way into the backgrounds of many of the book’s sp

reads. He also found inspiration in the Cuban drummer of a close friend’s band—“For several nights, I got there early to grab the chair next to the drummer, connecting to those clave rhythmic patterns”—as well as the work of Mexican artist, cartoonist, and illustrator Miguel Covarrubias. “He painted lots of musicians during this time period,” López explains, “and it was just what I needed at the time. For years I had been staring at a reproduction of his work at a café in town, just waiting for the chance to tip my hat. In one of the scenes where Millo plays for jungle animals, you will also find echoes of Henri Rousseau.”

Engle loves the results. “Rafael did a magnificent job of showing Millo’s courage and determination with his spectacular illustrations,” she says. “The movement, the visual music, the tropical colors, the festive joy!” For his part, López describes it as having lost himself in Engle’s text, trying to live in Millo’s skin and imagine “how she moved through the world during that beautiful struggle. I went through several tracing paper pads and kept drawing till I clearly heard Millo’s drum beat.”

It’s a book where both author and illustrator leave ample room for the reader. Engle’s text is spare and evocative, and López actively set out to give readers, as he put it, the chance to fill spaces in. “To channel the spirit of the text,” he explains, “I realized early on that I needed to think abstractly. For me this story evoked surrealistic ideas and refused to be chained to reality. I used symbols, like a drum with wings inside a cage, to convey Millo’s emotions. The art needed to switch from something concrete to abstract and back again. You will notice that in dreams, Millo lives in the incredible world of her own creation where she is free to drum. In those scenes, even the sun and moon have faces as they listen to her play. Imaginary creatures inhabit her world, and when she is there she can float and fly. As the prose unfolds, jungle animals and objects bring dimension to her dreams.” But in Millo’s gender-restricted reality, where she faces barriers to her dreams, López’s smiling sun is replaced by the stern looks of those who tell her that her passions aren’t possible. “As an illustrator,” López says, “I needed to crisscross this river of abstraction and connect these two important aspects.”

Engle—who will see the release later this year of her memoir, Enchanted Air—is thrilled to say that, though this was her first collaboration with López, they are now working on another book together. “It’s a book,” she explains, “with separate biographical poems about many different great Latinos, including many who, just like Millo, have been forgotten by history.” López adds that he’s “already started working to put my own spin on portraits of our Latino heroes.”

For now, we readers have Millo’s truly inspiring story, one both author and illustrator are proud to tell. “As a teacher,” López notes, “I meet many young people who have been discouraged from pursuing a career in the creative field. It takes courage to overcome that resistance.”