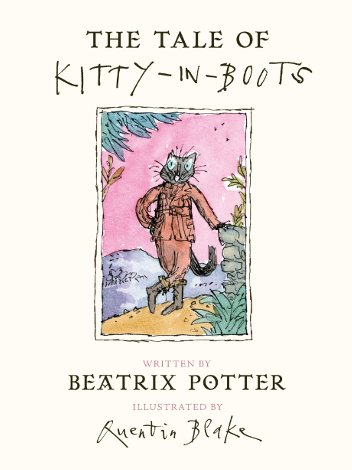 It’s a good time to be a Beatrix Potter fan. This year marks the 150th anniversary of her birthday, and given that her books have entertained readers for more than a century, making her one of children’s literature’s most beloved authors, celebrations abound. Much of the buzz has been around the publication of The Tale of Kitty-in-Boots, a new story from Ms. Potter herself, found in an archive collection two years ago.

The publication tale goes like this: Jo Hanks, a publisher at Penguin Random House Children’s Books, found a literary history of Potter, now out of print and evidently published in the early 1970s, which made mention of a letter Potter once sent to her publisher, a letter that referred to the very story that sees light of day this year. (Ms. Hanks talks a bit about that experience here.) A trip to the archives of the Victoria & Albert Museum in London resulted in three manuscripts, a rough color sketch (you can see that here), and a dummy book. Potter’s goal, letters revealed, had been to revisit and finish the tale, but “interruptions began.” It never made it to print.

Potter’s publisher Frederick Warne & Co. is bringing the story to readers this month, and they asked the celebrated Quentin Blake to illustrate it. The story is about a kitty who calls herself "Miss Catherine St. Quintin,” though her owner calls her “Kitty.” Kitty leads a double life, heading out at night to hunt; at one point, she is even mistaken for a man, which delights her. I love how Alex O’Connell at the UK’s Sunday Times writes: “Never mind Tabitha Twitchit and Tom Kitten, there’s a new cat on the block and she’s a gun-toting, gender-swapping stop-out who likes nothing better than pointing her air-gun at Peter Rabbit.” Yes, it’s true: Peter Rabbit, now older and portly, makes a cameo here, which is rather thrilling. So do some other Potter characters, in fact. And, yes, you could perhaps call Kitty a transvestite cat, as The Telegraph put it: “Doppelgängers and transvestites, guns and gangsters, secret lives: these are not the first things that come to mind when considering the work of Beatrix Potter.” (It’s been fun to read Brits’ reactions to this whole phenomenon, and that latter article by Gaby Wood goes into wonderful detail about why the story wasn’t published when written.)

The story, like classic Potter tales, has a grand sense of adventure, a complete lack of any sentimentality, and a streak of delightful menace, not to mention humor, though it varies in other ways from her earlier writings. For one, as Wood puts it, it’s “more intriguingly sinister” than her earlier writings, though many of her stories had a refreshing sense of danger too – e.g., Peter’s father getting stuffed into a pie. (Wood explains how Potter was thwarted by her publisher in her efforts to stop “making goody goody books about nice people.” Really, you gotta read Wood’s great piece.)

Much has been made about the publisher’s choice to have Quentin Blake illustrate this. There is a bit of literary cognitive dissonance that happens when you read a story by Beatrix Potter, illustrated by the man who brought to life so many of Roald Dahl’s tales. But I like it. I think, had the publisher chosen someone whose style is similar to Potter’s—her detailed, precise watercolors—it may have fallen flat. To have Quentin’s loose, impressionistic drawings seems a good match for this saucy story. I’d like to think Potter would have approved. (Though I may have already overwhelmed you with links, I figure if you’ve made it this far, you may want to know that in this video, Blake talks about taking on the project.)

Also coming from Warne & Co. (early November) will be A Celebration of Beatrix Potter, a collection of art and letters from more than 30 contemporary children’s book author/illustrators. As the Kirkus review notes, this is more of a book for adult fans of Potter. The text tributes to her do, indeed, sometimes get redundant, and some are penned better than others. Excerpts from some of Potter’s stories are included, but only a limited number of pages are included; the truncations are abrupt.

But if you are a fan of illustration, it’s a treat. In his painting, Brian Pinkney imagines Peter Rabbit in Clinton Hill, Brooklyn, Pinkney’s home. I love it. David Wiesner paints Jeremy Fisher on the same floating lily pads that frequent Tuesday, his 1992 Caldecott Medal-winning picture book. Jen Corace’s tribute to Hunca Munca made

me laugh out loud, laced with dark humor as it is. Some illustrators imagine scenes that never were: Paul O. Zelinsky (“Beatrix Potter has no time for sentiment”) grants Jemima Puddle-Duck an afternoon tea in the presence of a friendly fox, not one who nearly devours her and her eggs. And Peter H. Reynolds paints a traumatized Peter Rabbit getting a hug from his mother—instead of merely camomile tea, though the kettle is still heating up over the fire in the background.

Speaking of Peter, several illustrators pay tribute to Mr. McGregor. My favorite is Brendan Wenzel’s reverent text (though David Ezra Stein’s is a close second) and his portentous painting, showing Peter hiding from McGregor. He writes:

garden right downtown. … McGregor’s warning was simple: Wander outside the

borders, cross any of those carefully drawn lines, and you will end up in a pie. Potter

was a genius, and I have never trespassed.

In her tribute, Stephanie Graegin nails it when she writes: “Few children’s writers have created a world like [Potter’s]: sweet, dark, comforting, and a bit scary at times.” Yes. All things children need in varying doses. Happy birthday, Beatrix.

Tomie dePaola's illustration from A CELEBRATION OF BEATRIX POTTER used by permission of Penguin Young Readers.