Beautiful Books Inside and Out 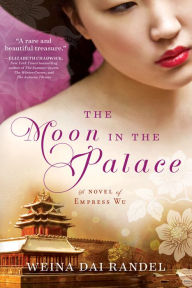 So far, it’s both lyrical and intriguing. I’ll give you an update when I’ve finished them both.

“There is no easy path for a woman aspiring to power.

A concubine at the palace learns quickly that there are many ways to capture the Emperor's attention. Many paint their faces white and style their hair attractively, hoping to lure in the One Above All with their beauty. Some present him with fantastic gifts, such as jade pendants and scrolls of calligraphy, while others rely on their knowledge of seduction to draw his interest. But y

oung Mei knows nothing of these womanly arts, yet she will give the Emperor a gift he can never forget.

Mei's intelligence and curiosity, the same traits that make her an outcast among the other concubines, impress the Emperor. But just as she is in a position to seduce the most powerful man in China, divided loyalties split the palace in two, culminating in a perilous battle that Mei can only hope to survive.

In the breakthrough first volume in the Empress of Bright Moon duology, Weina Dai Randel paints a vibrant portrait of ancient China—where love, ambition, and loyalty can spell life or death—and the woman who came to rule it all.”

When these books landed on my doorstep, I

was definitely intrigued by the story, but I was also captivated by those gorgeous covers! Aren’t they beautiful?

It reminded me that I’ve seen a number of covers lately that are worth sharing.

I’m a huge fan of Beatriz Williams, and her June release, A Certain Age, has a cover that draws me in like a cat to nip. (It doesn’t hurt that my favorite New York skyscraper, the Art Deco Chrysler Building, is part of it.) It’s described as “a beguiling reinterpretation of Richard Strauss’s comic opera Der Rosenkavalier, set against the sweeping decadence of Gatsby’s New York.” Nice!

MJ Rose always has amazing covers, and her July 2016 release, The Secret Language of Stones, might be the best ever. From Amazon: “As World War I rages and the Romanov dynast

y reaches its sudden, brutal end, a young jewelry maker discovers love, passion, and her own healing powers in this rich and romantic ghost story, the perfect follow-up to…The Witch of Painted Sorrows.”

Finally, you may know I love author Sonali Dev’s books and cover art, and her next cover is breathtaking. Change of Heart is scheduled to come out in September.

From the publisher: “Sonali Dev’s third and most substantial novel yet, A Change of Heart, delves beyond the surface of modern Indian-American life in an extraordinary story of secrets, danger, and the risks we take in the name of love….”

So what about you? Any covers you’ve found recently that dazzle you? Or books, for that matter, since we’re all about great reads here.

By the way, speaking

of art—have you been swept away by the coloring book craze and inspired to start on your own? This week Harlequin released the “What Lifts You” coloring book created by famed street artist and founder of the #whatliftsyou movement Kelsey Montague. I’m all about things that lift you, rather than bringing you down, and I think this book looks fun!

Harlequin is generously allowing me to give away a “What Lifts You”–inspired Coloring Kit at the Read-A-Romance Month Facebook page. You can find that here.