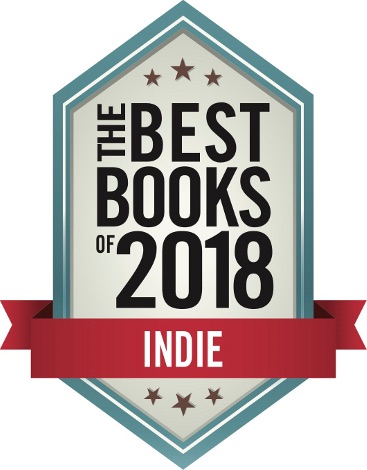 This year, Indie had a record-breaking number of starred titles—exactly 100. Author Jacob M. Appel, a regular on the list, appeared again with The Amazing Mr. Morality, a brooding short story collection infused with dark humor. The El Paso Red Flame Gas Station by J. Reeder Archuleta was another standout collection of short fiction; our reviewer calls it“a well-wrought panorama of small-town dramas and discontents.” There were memoirs of anguish and exile, poetry collections on the “dreams and despair of blue-collar America,” and one notable book on iconography. The genre, however, that ruled Indieland in 2018 was sci-fi. The tone ranged from grim to hopeful, but the constant was fine writing and well-imagined worldbuilding. Here’s a sampling of some of the year’s best:

Piercing Maybe by Dan Cray:“Cray…delights in the most gorgeous settings, from the opening on a Hawaiian beach to Australia’s red sandstone monolith Uluru, which ‘sparkled whenever the fading twilight hit the coarse quartz and feldspar’….Ultimately, this adventure is a linguistic feast and a moral challenge that readers should be eager to pass along.”

FACTION 9 by James Firelocke:“Thrums with creative juice,” says our reviewer.
“For his debut, author Firelocke marries modern politics and the outré to hypnotic effect….Fans of classic authors like Wells and Lovecraft will revel in Firelocke’s tight fusion of strange ideas, including divergent races of humanoid earthlings and giant insects frozen in time.”

REAP 23 by J.J. Perry: “Perry…tightens the screws of claustrophobia and suspense with aplomb and well-conceived characterizations, which are concerned just as much with matters of emotion (maybe more so) as with circuitry and astrophysics.” Karen Schechner is the vice president of Kirkus Indie.