Best of 2022: Our Favorite Middle-Grade Books 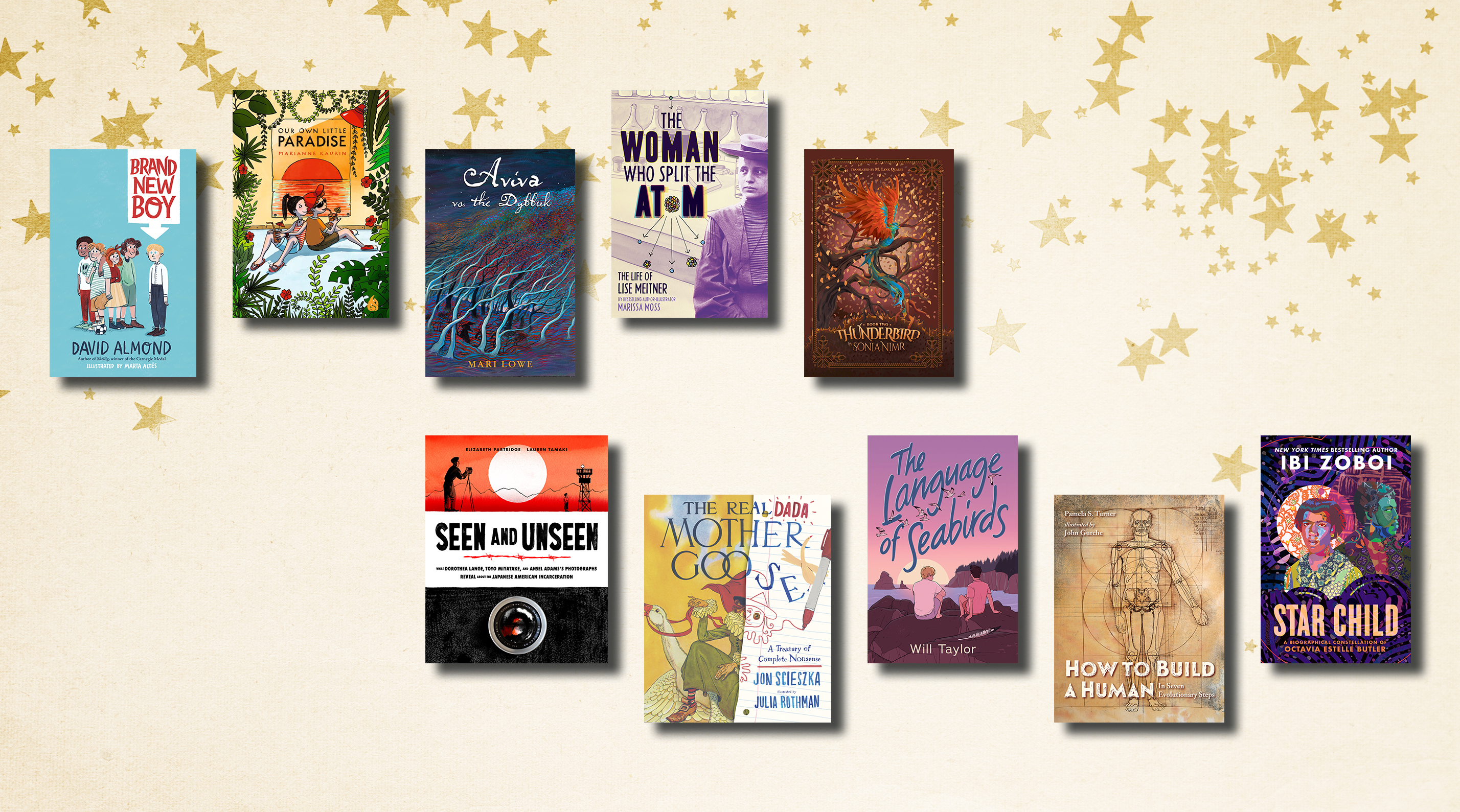 Background by Kier...in Sight on Unsplash

The past year has given us a bounty of middle-grade books, from tales of young queer love to superb poetry collections to enchanting fantasies and much more. Check out our complete list of 100 best books of 2022; below are just a few of the works that have mesmerized us this year.

Star Child: A Biographical Constellation of Octavia Estelle Butler by Ibi Zoboi (Dutton, Jan. 25): A blend of prose, sparkling verse, and photographs, this is more than a mere biography of writer Octavia Butler—it’s an intimate work that will leave readers feeling as though they’ve spent time in her company.

Aviva vs. the Dybbuk by Mari Lowe (Levine Querido, Feb. 22): An Orthodox Jewish girl grapples with her father’s death, her mother’s depression, and the prankster dybbuk only she can see. Lowe’s melancholy work is a spellbinding example of how pain can alienate us—and how a supportive community can bring us back from the brink.

The Woman Who Split the Atom: The Life of Lise Meitner, written and illustrated by Marissa Moss (Abrams, April 5): This fascinating, eye-opening blend of prose and comic book–style art shines a long-overdue spotlight on remarkable physicist Lise Meitner (1878-1968), whose groundbreaking contributions to the field were suppressed and overlooked due to her being Jewish and a woman.

Our Own Little Paradise by Marianne Kaurin, translated by Olivia Lasky (Arctis Books, April 12): This Norwegian import is an emotional, heartwarming story of young people grappling with socio-economic disparities, bullying, peer pressure, and the meaning of true friendship. Nora’s and Wilmer’s families can’t afford fancy holidays, but together they create their own safe haven.

How To Build a Human: In Seven Evolutionary Steps by Pamela S. Turner, illustrated by John Gurche (Charlesbridge, April 12): Turner pulls off an ambitious feat—making the story of human evolution not only comprehensible to a middle-grade audience, but as absorbing as any novel and even at times profoundly moving.

Brand New Boy by David Almond, illustrated by Marta Altés (Candlewick, June 14): Almond again offers readers a warm, humorous, and deeply humane story. The catalyst in this accessible tale that invites profound reflection and features charming illustrations is the arrival of an unusual new pupil at a perfectly ordinary school in the north of England.

The Language of Seabirds by Will Taylor (Scholastic, July 19): An Oregon beach, two 12-year-old boys, and the slow awakening of a sweet romantic love: This textured, character-driven work deftly expresses the feelings of being in between childhood and adolescence, including growing self-awareness of oneself and the fallibility of adults.

The Real Dada Mother Goose: A Treasury of Complete Nonsense by Jon Scieszka, illustrated by Julia Rothman (Candlewick, Oct. 5): Scieszka gleefully mashes up Blanche Fisher Wright’s The Real Mother Goose (1916) and the Dada school of thought; with Rothman adding her spin on Wright’s illustrations, this poetry collection is dynamic and strikingly original.

Thunderbird: Book Two by Sonia Nimr, translated by M. Lynx Qualey (Center for Middle Eastern Studies, Dec. 8): Orphaned Noor and her djinn helper embark on their second world-saving adventure through Palestinian history in search of phoenix feathers in this work translated from Arabic that is filled with moments of triumph and suspense as well as magically evocative scenes.