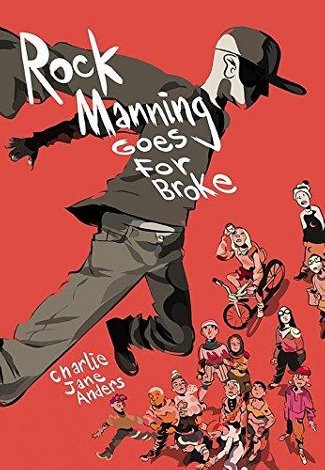 I hope you have some reading time set aside in September because there are a whole lot of books coming out that you will want to read. This month's lineup includes monsters in basements, mermaids, instantaneous travel to faraway planets, aliens, elves, and supervillains. Start reading!

WHAT IT'S ABOUT: In a dystopian alternate-present, two high school students gain popularity making short slapstick comedy films, which catches the attention of an emerging militia called the Red Bandanas. The kids quickly get pulled into the center of a dangerous propaganda campaign where they have to ask themselves hard questions about art and politics.

The Seclusion by Jacqui Castle

WHAT IT'S ABOUT: The search for our true history. Set in the year 2090—the era of America's self-imposed Seclusion in which it has walled itself off from the rest of the world—a young woman and her best friend, on the run from the law for finding a hidden cache of banned books, travel the country looking for answers and escape.

WHY YOU MIGHT LIKE IT: Castle's cautionary debut makes its dire future seem all too real and thus all the more moving.

The Chrysalis by Brendan Deneen

WHAT IT'S ABOUT: Millennials Tom and Jenny Decker are forced out of their expensive New York City home to live in the New Jersey suburbs where Tom literally finds a monster in the basement. But this monster makes good things happen. At first. By the time things go wrong, it's already too late.

WHY YOU MIGHT LIKE IT: This supernatural thriller is as mesmerizing as the monster's control over the Tom. It has already been optioned for film, so read it now before you see it on screen.

The Spaceship Next Door by Gene Doucette

WHAT IT'S ABOUT: A spaceship lands in a small mill town but, despite an influx of some permanent military residents and UFO-enthusiasts, seems to be a non-event. That is, until a few years later when strange things start to happen and a mysterious visitor learns that a young girl may be the world's only hope for survival.

WHAT IT'S ABOUT: In this first novel of a new duology, a noblewoman named Rhia Harlyn searches for her missing brother across a post-apocalyptic world where deadly sunlight has divided the world into light and dark. Armed with a solid understanding of science, she encounters a young rebel stuck between the two worlds of shadow and light, a charismatic cult leader who believes he can cheat death, and a brutal murder.

WHY YOU MIGHT LIKE IT: Come for the unique science-fantasy flavor, stay for the sf/f murder mystery.

The Mermaid and Mrs. Hancock by Imogen Hermes Gowar

WHAT IT'S ABOUT: An 18th century merchant named Jonah Hancock has his life upended when one of his captains trades in one of Jonah's ships for a mermaid. Jonah is forced to find new and questionable ways to profit from his new possession.

WHY YOU MIGHT LIKE IT: This engrossing fantasy is a great vehicle for an examination of sexual politics.

WHY YOU MIGHT LIKE IT: It's 528 pages contain twenty-nine of the best recent short fiction you can consume in one sitting.

WHAT IT'S ABOUT: In the year 2204—an unprecedented age of space travel thanks to the invention of linked jump gates that provide instantaneous travel to any human-settled planet in the universe—an alien shipwreck is discovered on a faraway planet. A high-tech and powerful corporation sends in a team (each member with questionable agendas) to investigate its possibly-dangerous cargo.

WHY YOU MIGHT LIKE IT: Hamilton is one of the premier authors of modern space opera and this story of first contact is the first in a brand-new series.

WHAT IT'S ABOUT: This box set collects L'Engle's linked classic science fiction adventure series The Wrinkle in Time Quartet (comprised of A Wrinkle in Time, A Wind in the Door, A Swiftly Tilting Planet and Many Waters) and the Polly O'Keefe Quartet (comprised of The Arm of the Starfish, Dragons in the Waters, A House Like a Lotus, and An Acceptable Time). Each of the Quartets is also sold separately.

WHY YOU MIGHT LIKE IT: There's a reason these books are being republished by The Library of America; the stories have withstood the test of time.

Searching for the Fleet by Kristine Kathryn Rusch

WHAT IT'S ABOUT: Set in a far future where derelict spaceships are salvaged by the people brave enough to "dive" them, the search is on for the legendary and mythical Lost Fleet of humanity's past.

WHY YOU MIGHT LIKE IT: Rusch's Diving Universe series, of which this is the latest novel, is a consistently palatable blend of mystery, science and drama.

Legion: The Many Lives of Stephen Leeds by Brandon Sanderson

WHAT IT'S ABOUT: A man named Stephen Leeds (nicknamed Legion), who possesses a peculiar mental condition that allows him to generate a multitude of imaginary personae, solves crimes.

WHY YOU MIGHT LIKE IT: Sanderson's contemporary fantasy is populated with superb characterizations (as evidenced by the multiple depictions of Legion's aspects) and is surprisingly thought-provoking.

Timeless by R. A. Salvatore

WHAT IT'S ABOUT: Two narratives drive Timeless. In the first, which occurs in the present, Zaknafein—the dead father of the infamous dark elf Drizzt Do'Urden—has been revivified. Alas, it is suspected that his resurrection is part of a plot by the dreaded Demon Queen of Spiders. The second narrative occurs 500 years in the past, where young weapons master Zaknafein is summoned by Matron Malice Do'Urden (Drizzt's mother) to sire a son.

WHY YOU MIGHT LIKE IT: Despite featuring a much-beloved character of several novels, this is the start of a brand-new prequel fantasy trilogy and is a great starting point.

WHAT IT'S ABOUT: Vengeful is the second book in V. E. Schwab's exciting superhero series, Villains. Here, the super-powered struggle between archenemies Victor and Eli continues even as Marcella uses her new-found power to bring the city of Merit to its knees. How can Merit City possibly survive?

WHY YOU MIGHT LIKE IT: On the surface, it offers superhero adventure. If you want to look deeper, it offers a thoughtful look at the nature of power.

The Electric State by Simon Stålenhag

WHAT IT'S ABOUT: Artist Simon Stålenhag illustrates a story of a teenage girl and her robot and their cross-country journey across a land devastated by a high-tech consumerist society addicted to a virtual-reality system.

WHY YOU MIGHT LIKE IT: Stålenhag art, which merges high-tech with landscapes of pastoral bliss, strikes a chord that resonates. Visually, it's pure sense of wonder. Hopefully it will come across if it ever gets made into a film.

Occupy Me by Tricia Sullivan

WHAT IT'S ABOUT: Pearl, an angel whose wings exists in another dimension and who works for an organization whose goal is to make the world a better place, tracks down a killer who lives in another person's body and carries a briefcase that is really a doorway to hell.

WHY YOU MIGHT LIKE IT: Sullivan's novel jam-packs a lot of elements into the story but does so in a way that's not overwhelming.

WHAT IT'S ABOUT: Taking place in an alternate history where Germany and Japan won World War II and now control the United States, a young man aims to fulfill his dream of becoming a pilot of a giant robot.

WHY YOU MIGHT LIKE IT: The tag line for this action-packed novel says it all: The Man in the High Castle meets Pacific Rim.

The Mouth of the Dark by Tim Waggoner

WHAT IT'S ABOUT: A man named Jayce searches for his missing daughter in the dark and dangerous alternate reality called Shadow. Even assisted by an enigmatic woman who guides him through the horrors of the Shadow, how can Jayce possible overcome the monstrous being known as the Harvest Man?

WHY YOU MIGHT LIKE IT: To find his daughter, Jayce crosses a line and becomes an even worse monster than the Harvest Man.

WHAT IT'S ABOUT: Years after the end of a war with deadly insectoid aliens called the Naxid, Captain Gareth Martinez and Captain the Lady Sula have been sidelined for their unorthodox methods by an establishment that's worried more about process than results. But a new war is brewing, and as forces once again try to regain control of the void left by the mighty Shaa, the fate of an empire may very well rest in the hands of these desperate exiles.

WHY YOU MIGHT LIKE IT: In this start to a new trilogy, Williams blends together space opera and military science fiction into an unputdownable treat.