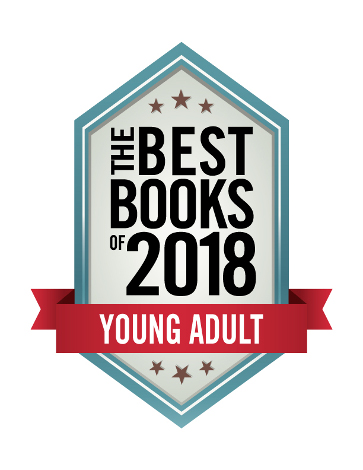 In surveying the crop of superlative 2018 titles that received Kirkus stars and embarking on the Herculean task of winnowing them down to just 75 top picks, a few patterns emerged. Not surprisingly, contemporary issues that have been front and center in national conversations—questions of race, gender, sexual orientation, identity, history—have also inspired some exceptional YA works.

This was a particularly strong year for nonfiction. We Are Not Yet Equal by Carol Anderson and Tonya Bolden (Sep. 11), a young readers’ adaptation of Anderson’s bestselling White Rage, is an overview of the history of white people’s concerted opposition to racial equality. Another book which tackles this

nation’s troubled history of racism is Attucks! by Phillip Hoose (Oct. 23), a case study of segregation in one Indiana town and its black high school’s outstanding basketball team.

Winifred Conkling’s Votes for Women! (Feb. 13) traces the history of the suffragist movement, placing this struggle for gender equality in the context of contemporary issues of race and class that reverberate through the decades. In I’m Afraid of Men (Aug. 28), Vivek Shraya, a South Asian–Canadian trans woman, describes the myriad ways, both large and small, in which toxic masculinity has circumscribed her life. The desperation of Syrian refugees seeking peace and safety is brought to life in Don Brown’s The Unwanted (Sep. 18), an impeccably researched graphic novel that gives context about and places a human face on a complex crisis.

Some of our top fiction titles similarly address topics of current discussion. Fire Song by Adam Garnet Jones (Mar. 13), set in present-day Ontario, centers on the experiences of a resilient gay Anishinaabe teen caught between the pull of his impoverished community and his ambition to move to Toronto to pursue higher education. I, Claudia by Mary McCoy (Oct. 1) is set a world away in an affluent California prep school, where the protagonist is marginalized due to her disabilities; as she expertly navigates the labyrinthine power structures of school government, the novel interrogates power and politics. In a similar vein, Catherine Barter’s Troublemakers (Apr. 1) asks readers to contemplate the personal and the political through the story of the daughter of a deceased activist being raised by her older brother and his partner in a family where relationships become strained by a divisive political candidate.

Identity and belonging are subjects that resonate as well. Inspired by actual events, Buried Beneath the Baobab Tree by Adaobi Tricia Nwaubani and Viviana

Mazza (Sep. 4) illustrates in heartbreaking detail the impact of religious extremism on a peaceably integrated Muslim and Christian village in northern Nigeria. Picture Us in the Light by Kelly Loy Gilbert (Apr. 10) shows many of the nuances of diversity within an Asian-American community in northern California and the ways that these differences take a personal toll and can be amplified in times of stress.

If you’ve been paying attention to the news lately, a clear connection between the topics dealt with in these works and matters of ongoing debate in schools and among families will be obvious. With their direct relevance to the current and future lives of teens, it is no wonder that these themes speak to young adult readers.