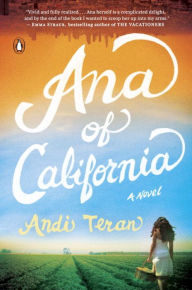 If you’re reading this column, it’s unlikely that you’ll need an introduction to L. M. Montgomery’s Anne Shirley. But just in case: she’s an accident-prone redheaded orphan with a quick temper and a vivid imagination; she’s eager to please, desperate to be loved, and the only thing bigger than her mouth is her heart. She celebrated her 100th birthday a few years ago—Anne of Green Gables was first published in 1908—and for nearly that long, she’s been one of Canada’s most well-known and much-beloved exports.

So. If you make a point of rereading the Anne books on a regular basis—or are already waiting with bated breath for the new movie—you might want to tide yourself over with Andi Teran’s Ana of California. It’s a contemporary reimagining of Anne of Green Gables starring a Mexican-American girl set in—you guessed it!—California. Like the original, it has a mostly gentle tone, but it’s definitely worth noting that Ana of California deals with tougher stuff than Anne of Green Gables—racism, homophobia, drugs, gangs and gang violence, child abuse—and that Ana is almost 16, rather than 11.

Ana Cortez—as she puts it, you pronounce Ana as in “fauna,” not Anna as in “banana”—has been in the foster system in East Los Angeles since her grandmother’s death. She’s been shuffled from house to house to house, and now, having exhausted all other possibilities, faces spending the rest of her pre-adulthood years in a group home. But her caseworker has found one last chance for her: an internship at a small organic farm in Northern California.

Like Anne, Ana’s hair is a constant source of stress, she is exceedingly proud of her nose and talks a blue streak—she was known in the system as La Boca—she is always willing to verbally defend herself and others, and she has a strong sense of fairness, honor, and loyalty. She knows that she’s unlikely to be at Garber Farm past her month-long trial period, but she’s determined to enjoy every last minute of it—to make memories, as Anne Shirley would have put it.

Teran does a nice job of updating and tweaking some of Anne’s most famous moments—the hair-dying incident becomes a hair-straightening incident, the raspberry cordial incident involves psilocybin mushrooms—and she does an even nicer job of allowing the moments to be recognizable nods to the originals while not recreating them shot-for-shot. The secondary characters, similarly, are recognizable-yet-different, and while some of Ana’s adversaries are entirely two-dimensional, well, so was Josie Pye. The romance never feels entirely fleshed out, believable, or necessary, but Ana’s complicated, imperfect, loving friendship with Rye Moon more than makes up for it.

The characters’ use of Spanish is really nicely done: oftentimes authors overcompensate for nonbilingual readers, which leads to unnatural dialogue, but not so here. Ana’s monologues are supremely Anne-ish, which, while entertaining, doesn’t always work—those passages often read more like something someone would write in a diary than actually verbalize extemporaneously.

Perfect? No. Would I read a sequel? Absolutely.