A Big Story in My Little Small 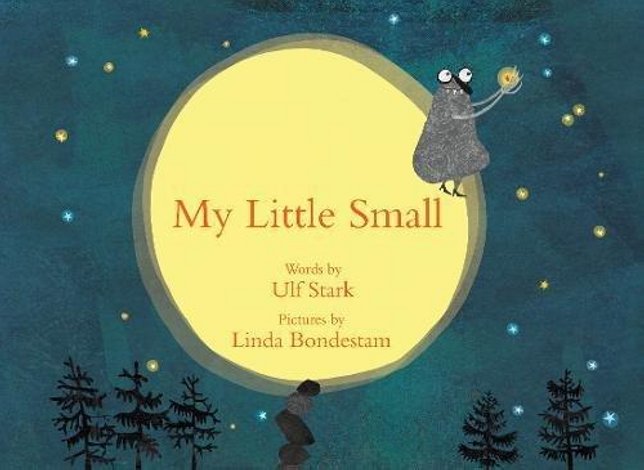 I’m fairly certain I’ve said this before here at Kirkus (probably more than once), but it’s a fact that “quirky” gets overused in children’s book reviewing. Merriam-Webster defines the word as “unusual in especially an interesting or appealing way.” That covers a lot of ground, so let’s turn to a similar word (since we all know that, once a word is exhausted, it starts to lose its oomph)—“idiosyncratic.” I like that, and it captures well the picture book import on my mind today, Ulf Stark’s My Little Small, illustrated by Linda Bondestam and coming to bookshelves at the end of this month.

Oh, this book’s beautiful idiosyncrasies! But, first let me tell you a bit about who created it and the story it tells.

This is the first English-language edition of this story, which began life four years ago in Sweden as “Min Egen Lilla Liten.” Ulf Stark, who died last June, was one of Sweden’s most celebrated children’s book authors, as well as a poet and screenwriter. Illustrator Linda Bondestam, who lives in Helsinki, has twice been nominated for the prestigious Astrid Lindgren Memorial Award. Translator Annie Prime is to thank for rendering the tale into English.

This is the story of a Creature. She looks a lot like a stone and is pointy-toothed and bug-eyed. The sun is dangerous to her. If she is exposed to it, she’s a goner. “So she stays inside,” Stark writes, “and, like the mountain, is gray, gray, gray.” But she is lonely and longs for “someone small to sing to and care for.” One morning, a sun spark—yes, a tiny spark from the sun (heaven bless the quirks of picture book imports, just when all the other picture book texts you’re seeing start to run together in your mind)—flies into the Creature’s cave. It comes from the Sun. “She is big and hot, heavy and very clever,” the sun spark tells the Creature. (I love this line.) Thus begins a friendship, though short-lived: The Creature finally has a small companion she can care for.

This tale has a tenderness about it, in large part thanks to Stark’s deft writing and Prime’s thoughtful translation; so vividly does the Creature’s personality gel on the page, and how beautifully both author and translator can turn a phrase. We know of the Creature’s loneliness: She has to self-soothe (sucks her thumb and sings “GRRRR” to herself to calm herself down) to even get to sleep in her dark cave, just before dreaming about a friend to care for. We know of her vulnerability, which is expressed through bouts of rage, especially when she turns on herself for crying when she feels alone. (“There, there,” she tells herself.) We know she has subtlety in her soul, as she stares at the sunset and thinks, “How beautiful it is!” We know she’s not too defeated to try: One night, she floats to the moon’s reflection on the water and tries to embrace it, not understanding it would shatter into “a thousand gleams.” The frogs laugh at her as she mourns this. And we know, despite her defeats, she refuses to give up hope, even giving herself pep talks. (“Don’t be sad. You are big, and everything will be better tomorrow.”)

Stark’s writing is direct and frank in refreshing ways. He tells readers in no uncertain terms (no patronizing to child readers here) that daylight will end the Creature: “[S]he would feel a little sick. Then very sick. Then she would die.” There’s also a lot of humor in the punchy short phrases he wields, particularly when the sun spark (named “the Spark”) tells the Creature about the outside world. In one spread, the Spark describes the hopping, jumping, and climbing animals that the Creature never gets to see, and here they are labelled with the kind of language that, say, a toddler would use. A snake is a “Sock Creeper.” An iguana is a “Green Muzzle.” A jackrabbit is a “Big Hopper.” In the hands of another author and/or translator (kudos to the translator for the humor in this entertaining spread), this might risk coming across as too precious or cloying, but it works.

Much humor is also communicated in Bondestam’s illustrations, particularly in the way she renders her creatures, all with bulging eyes and brimming with personality. It’s a difficult thing to capture why something in a book (again, its idiosyncrasies) makes you laugh so hard that your belly aches. The Spark is one of those things. It is a darkly funny character in that it is helplessly tiny and destined to only live for a single day. This is tremendously sad, yes, but you also find yourself laughing at Bondestam’s depiction of its wild-eyed, frantic look and flaming red hair, sticking straight up off its head. You laugh, despite yourself, at its impending doom. It’s Bondestam’s funny, over-the-top rendition of this character that tempers the ache you feel as the Creature sings to the Spark—even the “GRRRRRRR” song she sings to it is sweet and endearing in a very funny way—and as the Spark flies back to the sun, while the Creature waves goodbye. It’s the tiny-print “GRR” that you see next to the Spark, as it flies away from the Creature forever, that gets you laughing yet again. (My daughter and I had to put the book down here for this if-you-blink-you’ll-miss-it-moment and collect ourselves.) So funny. So moving. So true. That Stark and Bondestam pull that off so seamlessly—and with just the right tone—is quite a feat.

The Spark may have been terrified when it first landed in that cave, after all, but as it leaves, it earnestly warbles that tiny “GRR,” the one song it learned from the Creature—who finally was seen and who finally had someone to care for. “There, there,” the Creature once muttered, self-soothing with such tender, caring words. But in the Spark, she finally had someone to say “there, there” to. And, even though she has to say farewell, a spark is lit inside her.

I don’t have a crystal ball, but I think I can safely say this picture book is unlike any other we’ll see this year. A poignant and memorable tale of friendship-found, don’t miss it.