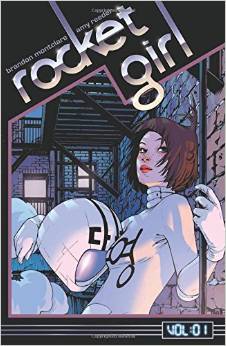 DaYoung Johansson is 15 years old, a member of the New York City Teen Police department, has just traveled back in time to save the world, and—did I mention?—is The Rocket Girl!

Talk about a fun, fresh story.

From the creative team of Brandon Montclaire and Amy Reeder, Rocket Girl Vol 1: Times Squared is a great, engaging story complete with time travel, evil corporations and, of course, jet packs! What more could anyone want?

I picked this one up at the same time as Captain Marvel, which I reviewed last time here at Kirkus. Both share common, uplifting tones (despite this books slightly darker plot) that really hit the spot for me.

The story begins in 1986 with a group of scientists in New York City about to turn on their invention, the Q-Machine. No sooner do they push the button does it explode, and DaYoung Johansson step out of the debris announcing she is from the future—2013—and they are all under arrest. Then she passes out. When she wakes, she is still in 1986, and New York is a foreign place. Very foreign. Being a cop isn’t something you just give up though, and she begins flying around, doing her job, protecting civilians. But the present-day cops don’t see her as helping, they see her as a vigilante of sorts, and want her stopped. The scientists want to know why she appeared, and what happened to their Q-Machine, a device that was supposed to change the world for the better.

In her time, DaYoung doesn’t see the Q-Machine, and the company built upon its success, Quintum Mechanics, as having done anything good at all. According to her confidential source, Quintum Mechanics has been tampering with the time stream, changing history to pad their bottom line. The reason teens work as police in 2013 is because Quintum Mechanics cleaned up the corruption, replacing adults with teens like DaYoung who know right is right, and wrong is wrong. And what Quintum Mechanics is doing is very wrong. And she will do whatever it takes to set things right again.

This book is interesting for a lot of reasons. One, we see DaYoung’s version of 2013 through flashbacks, and it’s very different both technologically (much more advanced) and culturally from our own 2013. And because those flashbacks are from DaYoung’s point of view, and she is in 1986 when they happen, they are, to her, “the past.” And the story taking place in 1986 is “the present.” It’s a subtle thing, but one that I found fascinating. A timey-wimey sort of thing.

Second, the characters are well drawn and developed. DaYoung knows who she is and is filled with that righteousness I think we all felt at 15 when we considered the world in black and white.

Third, there is definitely a bit of homage here to the cop movies of the ’80s, where DaYoung finds herself. One of the opening flashbacks is of her and her partner taking this crime of tampering with time to their captain. Although all three are teens, the entire thing is presented like a scene from Lethal Weapon or 48 Hours, which amused the heck out of me.

Fourth, there are a lot of threads and hints here to lead us to think maybe DaYoung’s past and present aren’t as connected as she (and we) believes. Like when two Quintum Mechanics Enforcers riding Hawkcycles show up in 1986 hunting for DaYoung. If her presence isn’t changing the future….

Rocket Girl is a fabulous book. Go read it.