The Blood on Her Hands 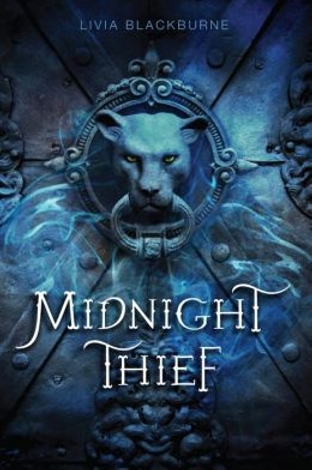 Whether or not you enjoy Livia Blackburne’s Midnight Thief will depend entirely on what aspect of epic fantasy that you hold most dear.

If it’s worldbuilding, it’ll probably be a miss. Midnight Thief is set in a run-of-the-mill medieval-ish city called Forge, complete with an Assassin’s Guild, lots of young street urchins, strong divides between social and economic classes, and outside the city, mysterious barbarian raiders. Except for our heroine’s tendency to occasionally use the word in’t—basically the Epic Fantasy version of ain’t—the characters’ speech patterns are all pretty similar, regardless of cultural, social, or educational background. For some epic fantasy with much stronger worldbuilding, see Elizabeth Bunce’s Thief Errant books.

If it’s character, it may also be a miss. The majority of the characters begin and end the story as basic archetypes: The impetuous-but-goodhearted thief, the handsome-yet-dangerous assassin master, the patriotic-yet-questioning city guard, the motherly tavern keeper, the tough-yet-fair Minister of Defense, the grasping politician, the proud lady warrior. The major characters get fleshed out a bit more, and some of them even achieve growth, but in both cases, that comes about more due to telling than showing. For a story with more character development and growth, see Rae Carson’s Girl of Fire and Thorns trilogy.

If it’s pure adventure, definitely give it a try. Grappling-hook-happy Kyra scales walls in the dead of night; sneaks in and out of the palace unseen; gets involved with the aforementioned Assassin’s Guild; has a rooftop run-in with a huge, intelligent cat; and gets roped into an Escape From New York–esque Do Our Bidding Within This Timeframe And We’ll Give You The Antidote situation*. And that’s just in the first half of the book.

If it’s for an exploration of meaty, complex issues with lots of moral ambiguity, pick it up. During a mission to steal medical supplies for the poor, our heroine kills an innocent man—not deliberately, but she does it—and from that point on, his blood is on her hands. Or is it? Is his life more important than the lives of the people who’ll be saved by the supplies? If he’s working for those who confiscated the medicine, is he really an innocent? Basically, do the ends justify the means? That’s only one situation of many, and when Kyra gets to know the barbarian raiders, things start to get REALLY interesting.

Basically, the first half of Midnight Thief reads like the bones of a generic Dungeons & Dragons module: everything’s sketched in, but the Dungeon Master and players haven’t given it any distinct personality. If I hadn’t been reading it for review, I might have put it down. Then again, maybe I wouldn’t have. Either way, due to the stronger second half, I’m glad that I didn’t.

*Sadly, she does not get Snake Plissken’s awesome countdown watch or even more awesome spandex pants.