A Book You'll Howl For 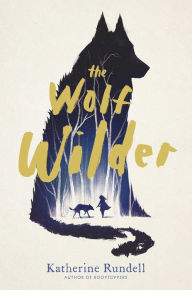 Maybe it’s because I’ve still got Star Wars: The Force Awakens on my mind (it was as good as everyone says), but I’ve been thinking lately about new children’s books that feature strong female protagonists, those who aren’t defined by the boys or men in their lives (much like the amazing Rey in the film).

It turns out that one of my favorite books from this year is such a book, Katherine Rundell’s The Wolf Wilder. I’ve been bugging all my friends lately about this book and Rundell’s superb writing. As soon as I finished this novel, I picked up Rundell’s Cartwheeling in Thunderstorms, also released this year, from my local library. This one received the 2015 Boston Globe-Horn Book Award in the category of Fiction, so I have high hopes for it, too. And thus far, it’s mesmerizing. Unsurprisingly, it has a strong, capable girl protagonist.

Since I haven’t finished Cartwheeling, I can really only talk about The Wolf Wilder, but I heartily recommend it. In fact, I was going to write about picture books today, as I usually do, but I found myself wanting to tell you about this compelling story instead.

The story is set in the early 20th century in Russia, where Feo (short for “Feodora”) and her mother, Marina, live. The two of them live alone, deep in the icy wilderness. They are wolf wilders, those who “teach wolves how to be bold again, how to hunt and fight, and how to distrust humans.” Notice the word “again”: Rundell is talking here about wolves who were captured by wolf merchants and sold to aristocratic families, since wolves in the home were considered good luck. Peter the Great, she writes, had seven wolves, “all as white as the moon.” Since wolves cannot be tamed and never quite adjust to fancy-pants homes, to put it roughly and mildly (they go “mad at the imprisonment”), they are released back into the wild. It’s here the wolf wilders step in.

Feo is a “dark and stormy girl,” much more comfortable in the company of wolves than humans, though she worships her mother. There’s a passage at the opening of the book, which stopped me in my tracks (and which I may have read enthusiastically to my book club members last night). Here, Rundell is writing about Marina:

“Marina’s shoulders and back and hips were wide; she had muscles that were more

commonly seen on men, or rather, Feo thought, on wolves. But her face, a visitor had

once said, was built on the blueprint used for snow leopards, and for saints. ‘The look,’

he had said, ‘is goddess, modified.’ Feo had pretended, at the time, not to be proud.”

Even better, that sublime line about snow leopards and saints is repeated during a pivotal moment at the book’s close, bringing readers full circle.

I don’t want to tell you the plot of this book, because I don’t want to spoil it for you, plain and simple. It was such a captivating story, and so well-written (the ending was more abrupt than I expected, but I quibble), that I’d hate to ruin your read. I’ll only say what you’d get from the book blurb itself, that the antagonist is one General Rakov, who kidnaps Marina, and Feo joins forces with an unlikely new friend to head to St. Petersburg to save her mother from imprisonment. First, they have to make their way through the frigid, snow-packed woods—and with her beloved wolves in tow.

What I can tell you is that Rundell writes with a precision that is spellbinding. This is an author who knows how to turn a phrase, as they say. Her evocative writing grabbed me and didn’t let go. Her Feo is, at turns, fierce and tender. She’s real, complex, vulnerable, and courageous. The Kirkus reviewer wrote that it’s a story that brings readers “bitter storms and ambushes, terror and tragedy, an unrelenting sense of purpose lightened with flashes of humor.” Yes, all of that. And more. There are even a couple of moments that twist your heart around inside your chest.

Would you groan if I say I wolfed down this book? I did, despite the painful pun. It was one of my favorites this year—with the kinds of well-crafted sentences it was a pleasure to read aloud to my children. I can’t wait to see what Rundell does next.