Books All Over the Map 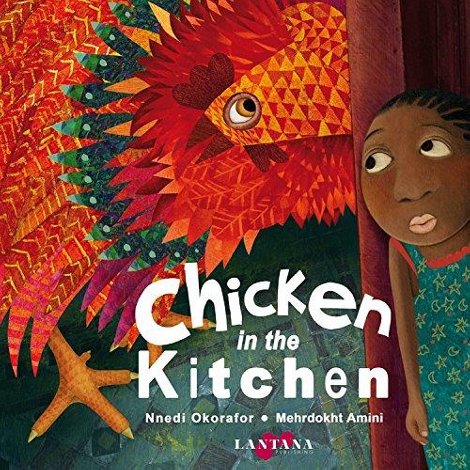 An art puzzle book of American and Chinese songs. A wood spirit. Forgetful sisters with prophetic dreams. The triumph of a middle sibling. These are all plot points in a small stack of brand-new picture books I want to tell you about today, each and every one of them with an international flair, if not once originally published overseas.

Let’s start with Africa – Uganda and Nigeria, to be precise. If you follow international picture books closely, as I like to do, you might notice that it’s relatively easy to get European and Asian imports, but it’s not always easy to find books here in the States that were originally published anywhere in Africa.

U.S.; four picture books are on shelves this Fall. Two of them have African roots: Nnedi Okorafor’s Chicken in the Kitchen, illustrated by Mehrdokht Amini, is told from the perspective of a Nigerian girl, and Nansubuga Nagadya Isdahl’s Sleep Well, Siba & Saba, illustrated by Sandra van Doorn, is set in Uganda.

Chicken in the Kitchen—from an author born here in the States to Nigerian parents and an Iranian-British illustrator—is the story of Anyaugo, who wakes in the night to a loud sound. There’s a mammoth chicken roaming the house, and the Wood Wit is messing with it. The Wood Wit is a sort of animated spirit, who can appear in any wood surface of the home. “I know everything that the wood knows,” he tells the girl. Anyaugo does her best to manage the mischief the chicken causes, and eventually she dances with it, remembering what her father once told her: Masquerade spirits sometimes make an appearance in order to participate in the New Yam Festival. The festival is nigh, and she is relieved to have determined why the chicken is in her home:

“Masquerades visited the community during festivals, ceremonies and events. Some

were spirits of the elements, like the land and water. Others were ancestors returning

to dance, showing that death was a natural part of life. This one must have come for a

Sleep Well, Siba & Saba is the debut picture book from Ugandan-American writer Isdahl and French illustrator van Doorn. It’s the story of two absent-minded sisters. They may lose a lot of things—sandals, slippers, and sweaters—but “the only thing they didn’t lose was each other.” One night, their Papa sings to them before putting them to sleep. In their dreams, they find the objects they’ve lost. The next night, when Papa sings the same song, they dream of things yet to come—only to find them come true the next day. “And from that day on …. [t]hey only dreamed about the special things they would someday see.”

Both books, with their brightly-colored, textured art, bring American children the types of stories and settings they just won’t see in books from American creators—

unlike Susanna Isern’s Middle Bear, illustrated by Manon Gauthier. It was originally published in Spain, though Spain isn’t in any way integral to the setting.

Isern is a child psychologist, which comes as no surprise in this story that very much wants to empower middle-born children. The children in this case are bears, as the title indicates, and the middle-born bear becomes the hero of the story in the end, though he spends most of his time in the story being middle-sized and middle-placed and mediocre in every way. “Sometimes he felt sad,” Isern writes, not at all wanting to be the one in the middle of everyone else’s greatness. When he and his brothers set out to fetch some willow tree bark for their ill parents, it turns out that being middle-sized is just what it takes to cross a frozen river and get to the other side – and save the day. Gauthier’s illustrations convey a naïve simplicity, with middle-of-the-road greys and pale colors being the name of the game, as if to emphasize the middle bear’s lot in life.

Finally, for something unlike anything you’ve seen this year, don’t miss Xu Bing’s Look! What Do You See?: An Art Puzzle Book of American and Chinese

Songs, adorned with Becca Stadtlander’s detailed, folk-art style illustrations. Bing, who was born in China and now divides his time between Beijing and Brooklyn, brings readers a collection of classic American songs, as well as camp and school sing-alongs from China. Each spread features an illustration from Stadtlander, as well as song lyrics written in secret code, using what is called Square Word Calligraphy, invented by Bing in the 1990s. Entire words are compacted into a space the size of a typical character in Chinese calligraphy, and it’s up to the reader to figure out what the words are. (For anyone stumped, the book closes with an Answer Key, as well as a guide to writing your own Square Word Calligraphy.)

Lovingly designed, intellectually stimulating, and beautiful to look at, Look! What Do You See? is one to pore over.

And there is so much for children to see—and puzzle out—in all of these entertaining international treats.