Books to Fall For 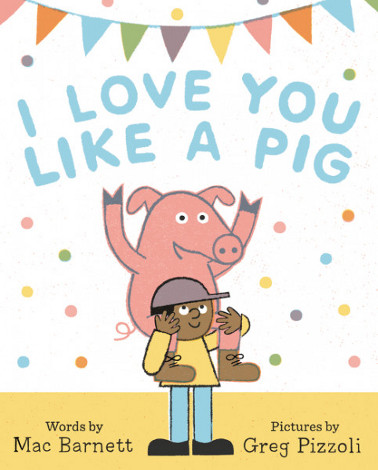 I know we haven’t seen Summer picture book releases yet, so forgive me, but I’m looking at my stack of Fall picture book F&Gs and wanting to write a sneak-peek about some books I’m excited to see. F&Gs, for those who may think I’m suddenly and inexplicably cursing (“F&Gs” has always sounded like that to me), are early, pre-bound versions of picture books. Think of them as picture book galleys. (And because they are not bound, if you drop one, you will likely lose the story thread altogether, since dropping one means about ten or so very wide pages slide across the floor, gleefully giving you the middle finger and laughing at your attempts to put them back in order. I suggest investing in rubber bands if F&Gs are a part of your life.)

Where was I? Oh, yes. Let’s look at a small handful of Fall 2017 releases. You won’t be able to click on the book titles and read a Kirkus review; it’s too early for that. But sometimes it’s fun to look ahead. First up is Mac Barnett’s I Love You Like a Pig, illustrated by Greg Pizzoli and coming to shelves in September.

Now, let me say this: I see a lot of picture books in any given year. I regularly receive review copies from big and small publishers the world over. When you see this many books, some of them start blurring in your vision. That is, you see the same narratives; you see illustrators latching on to other illustrators’ styles; and you generally see the same conventions. In fact, Mac Barnett put it well in a 2012 chat he and I did here at Kirkus, when I asked him how it feels to have his books repeatedly described as “quirky”: “The same plots get trotted out,” he said. “Great ideas are shaved and sanded down until they look … like a lot of other things on the bookshelf.” (He added, “I like strange stories, shaggy stories, stories with knobby bits and gristle and surprises.” I’ve always wanted to splash that somewhere across my blog or maybe tattoo it on my forehead, as I whole-heartedly agree.)

So, it’s no surprise to me that his new book, I Love You Like a Pig, plays with the notions of love and friendship in surprising and unconventional ways. You know those books where children express affection and devotion for someone: it’s usually for a parent, and they tend to be on the cloying end of things. (Think along the lines of the eternally bestselling Guess How Much I Love You with lines like, “I love you all the way to the moon and back.”) Here, Barnett brings readers a series of perfectly enigmatic and thought-provoking statements, ones that are dreamy for an illustrator to play with, digging for delightful meaning all over the place. The titular “I love you like a pig,” for instance: Pizzoli interprets this in one way (a boy giving a present to his friend, who is a pig, no less), but the meaning of that can absolutely run the gamut in the imagination of children before they ever see the illustration. (According to the book’s dedication, a librarian gave Barnett the title for the book.)

“I like you like a rowboat.” “You’re funny like a fossil.” My favorite may be: “I’m lucky like a window.” I gotta stop now. I can’t quote too much from one book, but you get the idea. Barnett is asking readers to make connections by giving them these delightfully open-ended, innovative, and screwy sentiments you don’t normally see in picture books. It’s funny as hell and a breath of fresh air.

Next up is a picture book biography of Vincent van Gogh, Barb Rosenstock’s Vincent Can’t Sleep: Van Gogh Paints the Night Sky, illustrated by Mary GrandPré and coming to shelves in October. Boy oh boy, it is hard to do a picture book biography well (though this pair is well-qualified), particularly when your subject had a mental illness. I can only imagine a lot of hand-wringing on the part of publishers, who may be nervous about parental tsk-tsk-types of responses. (I don’t want my child to read about mental illness!) How should an author handle that? In my book, they should do so with complete honesty, which is what Rosenstock does here.

She starts with Vincent’s boyhood in the Dutch village of Zundert and follows him as he grows, all the while emphasizing his restlessness and attempts to deal with darkness, in more ways than one. Vincent couldn’t sleep, it turns out, because as a child, he suffered from insomnia, but as an adult, he suffered from a mental illness. This is stated explicitly in the Author’s Note but handled with a lighter touch in the text: “He runs into the soothing darkness and is brought back to the harsh light over and over again.” Rosenstock touches upon both his mental and physical drifting and his “many-colored moods,” calling him “a sensitive boy, a hidden genius, a brilliant artist.”

I just finished Deborah Heiligman’s brand-new Vincent and Theo: The Van Gogh Brothers, a 464-page account of the Van Gogh brothers’ relationship, exhaustively researched and beautifully written. (More on that next week here at Kirkus, as Deborah will visit and talk to me about this book.) When I saw Rosenstock’s F&G, after having been so moved by Deborah’s book, I was entirely unsure if my heart and brain were ready for a picture book account of Vincent’s life. I feared that it would sentimentalize and/or sanitize his struggles. (This is not because Rosenstock isn’t a talented writer, but because some picture book biographies lean this way.). It does not. It is handled elegantly, truthfully. And the final spread from GrandPré is breathtaking. It’s not going to be for everyone (what art is?), but I find it to be quite moving.

I’ll close with Patrick McDonnell’s The Little Red Cat Who Ran Away and Learned his ABC’s (the Hard Way). This quickly endeared itself to me, and I’m saying now for the record that this will go down as one of the year’s best picture books. It’s an alphabet book. There there now. Do not roll your eyes: I know we annually see a whole heapin’ TON of alphabet books, some on the mediocre side of things, and I know you probably dread the forced “X” and “Z” parts of the story. But this one is never forced, and it’s very funny. It’s also perfectly paced, filled with adventure, and fully entertaining in many directions.

Other than capital and lower case alphabet letters on each spread, it’s wordless. McDonnell doesn’t include a single word on the page, but child readers can find the item in the illustration that begins with that letter. The opening illustration shows an exuberant cat, bolting outside. Freedom! But on the “Aa” spread, he meets an alligator. On the “Bb” spread, we see a bear. And so on. There’s so much humor here, and the story takes you in unexpected places with an exceedingly charming cast of characters. You’ll want to find a copy as soon as this one hits shelves in early September.

I could go on, but we’ll stop at these three. It’s going to be a good Fall, filled with good reading.