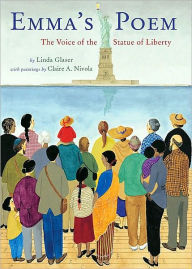 My favorite music podcast, NPR’s All Songs Considered, did a show this week called “Music for Healing.” In the wake of the Paris attacks, which included gunfire at a show in a music venue, the podcasters didn’t feel up to featuring new music, as they do weekly. Instead, they played thoughtfully chosen songs in an attempt to bring healing and provide “some space for moments of solace.”

I feel like doing something similar in my column here this week, though instead of writing about children’s books that bring healing, I find myself thinking about the very important discussion going on now in this country about whether or not to welcome refugees on American soil. What come to my mind are three picture books, in particular, that I think are great to share with children now, should the topic arise. They may or may not be good for healing per se, but they’re certainly good for prompting thoughts and conversations about compassion.

Linda Glaser’s Emma’s Poem: The Voice of the Statue of Liberty (2010)—the winner of the 2011 Sydney Taylor Honor Award in the Younger Readers category and illustrated by one of my favorite illustrators, Claire A. Nivola—looks at the life of Emma Lazarus, who wrote the poem that imbued a tall, imposing statue with great warmth. What Glaser does especially well is establish at the book’s opening that Emma lived a privileged life: She “had plenty of everything,” such as love from her family, food, and fine clothes. “Even when Emma was all grown up,” Glaser writes, “she still only knew people who had plenty of everything.”

But it was the poor immigrants around her in New York that caught her eye. “Her heart hurt to see them,” and she befriended many of them. Though the Statue of Liberty was created as a symbol of liberty, not necessarily a beacon for those coming to America, Lazarus wondered, what would she say? Hence her words, forever altering how Lady Liberty was seen:

“Give me your tired, your poor,
Your huddled masses yearning to breathe free,
The wretched refuse of your teeming shore.
Send these, the homeless, tempest-tost to me,
I lift my lamp beside the golden door!”

Doreen Rappaport’s Lady Liberty: A Biography (2008), illustrated by Matt Tavares, tells the history of the Statue of Liberty from various points of view—from the perspective of

everyone from the engineers, to the sculptor, to the poet who wrote in her honor (Lazarus again), to those who gathered nickels and pennies (and even farm fowl) to help fund her. It’s an impressive biography, showing how the visions and hopes and sweat of many, including many immigrants to the States, gave birth to one of the world’s most iconic statues.

But it’s the personal touch Rappaport adds to the story that is especially moving. In the opening spread—the author’s own musings on her grandfather’s journey 120 years ago from Latvia to the United States and what it must have felt like for him to see Lady Liberty in the harbor—Tavares brings to life the boat of Rappaport’s grandfather,

“a ship packed with people from many different countries . . . and there was
Lady Liberty greeting them all . . . People lifted babies so they could see her.
Tears ran down my grandfather’s face. People around him were crying, too.
And then a wave of cheering and hugging swept over the ship.”
Tavares even paints the present-day Rappaport in the picture as well, standing above the immigrants and also looking reverently at the statue. It’s an affecting spread, knowing she is standing above her own grandfather, perhaps even the one man in the illustration who is extending his arms toward the statue.

And the third book I have on my mind this week? It has nothing to do with refugees or immigration—in fact, it is set mostly on a playground and is largely about class—but everything in the world to do with kindness, which we should all have top of mind right about now. It’s one of my favorite picture books ever and a book I bring up often—Jacqueline Woodson’s Each Kindness (2012), illustrated by E. B. Lewis. It’s the very sober, open-ended story of wh

at happens when we eschew compassion and refuse to exercise empathy, when our hearts are close-fisted and we turn a cold shoulder. It “unfolds with harsh beauty and the ominousness of opportunities lost,” writes the Kirkus review. Find a copy. Buy one, if you possibly can. It’s a good book to have on hand for reading and re-reading. And then reading again.

As for opportunities, the world has a huge one now: to respond with benevolence to those in need. It’s complicated by a host of socio-political factors, but it’s what we must do. And for now, we can open up the conversation with the children in our lives with these beautifully crafted picture books.