Books In The News:

Someone died 400 years ago tomorrow... 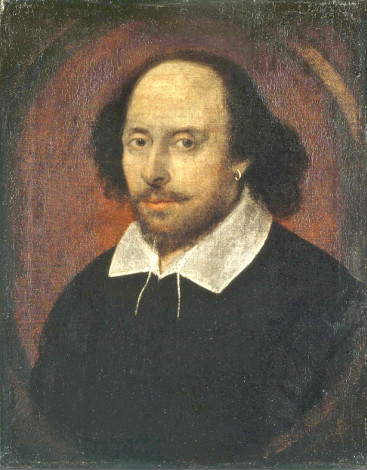 Assassination, articulate, obscene, puppy dog, barefaced, laughable. A foregone conclusion, salad days, as good luck would have it, play fast and loose, make a virtue of necessity, in my mind’s eye. We owe countless—yes, another of his coinages—insights into the human condition, as well as scores of words and expressions, to the Bard of Avon, William Shakespeare. As well as that linguistic treasure vault, his name is attached to 36 plays and 150 sonnets. Four of his best-known works were not published until after his death: Twelfth Night, Macbeth, Antony and Cleopatra, and The Tempest, and of course there’s always the business of whether the Earl of Oxford, or Kit Marlowe, or space aliens weren’t really the authors of his works…

In all events, tomorrow, April 23, marks the 400th anniversary of the death of William Shakespeare, an event that book readers, writers, actors, and theatergoers will remark in many ways. It speaks volumes that Shakespeare continues to invite new interpretations, including, as Jim Higgins notes in the Milwaukee Journal Sentinel, a geezer production of Romeo and Juliet that seems right for the aging Western world.

Shakespeare died, traditionally, on the same day as Miguel Cervantes, the unwilling hero of Lepanto who spent his own older years crafting marvelous tales of a knight who refused to accept that the Middle Ages had given way to the modern world. It’s a bit of a cheat that we celebrate the passing of the two on April 23, since the two, as Salman Rushdie notes in a smart essay in the New Statesman, would not have recognized that date as falling on the same day, the one using the Gregorian and the other the Julian calendar. Lest that spoil the fun, though, let’s simply give thanks to the universe for putting those great minds and pens on our planet to begin with.

Shakespeare wrote about some sketchy people: murderers, usurpers, teenage lovers. Cervantes, of course, celebrated madness—and then there was that hooker, the fabulous Dulcinea. What to do? Well, get their books banned from school libraries, of course, because if you can’t read about prancing sprites and heaving-bosomed damsels, you won’t be inclined to sin. Right? Hmmm.

The American Library Association has had plenty of experience dealing with such logic, and in its annual State of the Libraries report, it enumerates the most prominent targets of the busybodies and moral watchdogs. E. L. James’s Fifty Shades of Grey figures high on the list, which might be all right if the charge were for crimes against literature—after all, a teenager might be tempted to try to commit some of those awful sentences and mangled metaphors, since the grownups seem to be getting away with it. Oddly, the Holy Bible lands at sixth spot. Could have something to do with Hagar, Potiphar’s wife, and suchlike things…

Those who would bother themselves with trying to exile Grey’s

book, to say nothing of the Bible, might have a look at a recently unearthed letter by Kurt Vonnegut, whose own books were often banned. To a North Dakota school board member incensed by the language of Vonnegut’s Slaughterhouse-Five, he wrote, “If you were to bother to read my books, to behave as educated persons would, you would learn that they are not sexy, and do not argue in favor of wildness of any kind. They beg that people be kinder and more responsible than they often are. It is true that some of the characters speak coarsely. That is because people speak coarsely in real life. Especially soldiers and hardworking men speak coarsely, and even our most sheltered children know that. And we all know, too, that those words really don’t damage children much. They didn’t damage us when we were young. It was evil deeds and lying that hurt us.”

To which we might say amen. As to those who actually bought Grey’s book, well, it’s an interesting matter for statisticians and librarians alike to ponder how many copies are on view on the shelf, rather than tucked away in a nightstand drawer. “Obviously I read them,” writes Flic Everett of Fifty Shades and its prurient kin, “but I deleted them from my Kindle as soon as I’d finished. If you’re going to sink to that literary low, it’s essential to hide the evidence altogether.”