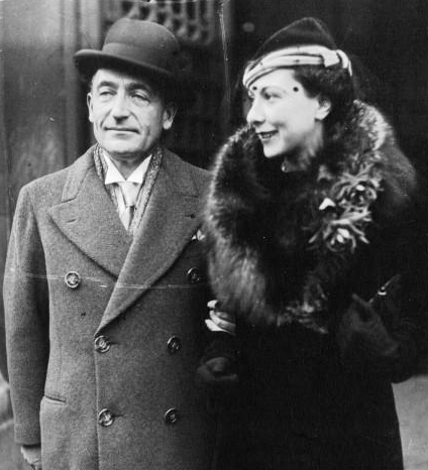 Jules Romains with his wife Lise Dreyfus at their wedding in 1936.

What’s the world’s longest novel? No, it’s not The Bridges of Madison County or The Da Vinci Code, though it seems as if a lifetime has passed before one reaches an end to them, but instead Jules Romains’ Hommes de Bonne Volonté, tipping in at 2 million words and eventually published in 27 volumes between 1932 and 1946. An abridged English version, Men of Good Will, was published in 14 volumes, also wrapping up in 1946, perfect for a winter in Antarctica. The figures need to be updated to include Mark Danielewski’s ongoing The Familiar, which, coincidentally, will also tip in at 27 volumes, and William Vollmann’s Seven Dreams, but they still don’t threaten Romains’s fictional output.

Over on the nonfiction side, the only real contender for Romainsesque girth was a book purported to run into the millions of words: an oral history of the world by a now largely forgotten fellow named Joe Gould, who died in 1957, that “he’d been writing in hundreds of dime-store composition books, their black covers mottled like the pelt of a speckled goat, their white pages lined with thin blue veins.” The words are the gifted Harvard historian Jill Lepore’s, who, last summer, offered a fine study of Gould and his chimerical book—which may never have existed.

Meanwhile, reports The Guardian, books are getting longer—80-odd pages longer on average, as of the end of 2014, the last year surveyed, than the books published in 1999. “The Americans have led the way,” remarks London-based literary agent Clare Alexander, pointing to Donna Tartt, Jonathan Hansen, and Hanya Yanagihara as examples. (Vollmann and Danielewski get a pass.) Of course, Dickens was no slouch in his day, and then there are such books as The Northern Clemency and recent biographies of Margaret Thatcher to offer as counterexamples from across the pond.

What, exactly, is a harmful book? It might be one so long that it threatens to curve the spine. Or it may be a book that “depicts homosexuality,” in the language of a bill just introduced in the Kansas legislature. Sexual conduct, sexual excitement, sexual departure, sexual—well, Senate Bill 56 opens to prosecution any K–12 teacher who assigns or even recommends a book depicting such matters “in a manner that is patently offensive to prevailing standards in the community with respect to what is suitable for minors.” Good-bye, Judy Blume, William Golding, S.E. Hinton…

Sex, sex, sex. That’s right, I said it, as the youngsters’ taunt goes. Kate Millett said it, too. Her book Sexual Politics turns 45 this month, occasion for a reissue on the part of Columbia University Press. Among other things, the reissue arrives at a time when pundits are debating whether feminism is dead—it probably isn’t, even if Gloria Steinem is complaining that young women support Bernie Sanders only because that’s where the boys are. A selection from Rebecca Mead’s afterword to Millett’s now-classic book is available at The New Yorker’s book blog.

On the matter of long books, some diehard fans were understandably nervous when it was announced last year that Jason Segel, the amiable comic actor, was slated to portray the novelist David Foster Wallace in a film based on

David Lipsky’s 2010 memoir Although of Course You End up Becoming Yourself. The film, The End of the Tour, recently went onto streaming video and into DVD release. Critics thought Segel did just fine, and it’s worth seeing. Meanwhile, one of Wallace’s best-known books turned 20 this month, occasioning a thoughtful piece by Tom Bissell over in the New York Times Book Review. “How is it, then, that ‘Infinite Jest’ still feels so transcendentally, electrically alive?” Bissell asks. Perhaps because the author of that book, eminently harmful in a way to trouble a Kansas politician’s dreams, makes every one of its 1,079 pages count.