Books of the Season 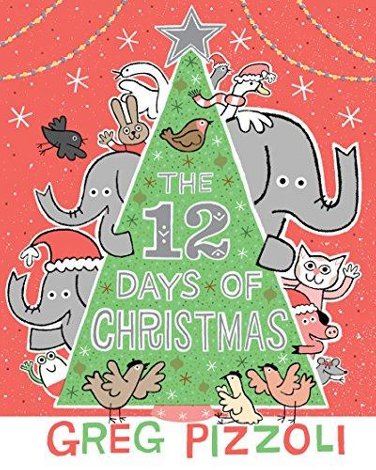 It’s hard to make fresh a picture book adaptation of the classic holiday song “The Twelve Days of Christmas” (many of them exist). But author-illustrator Greg Pizzoli seems to have done this in his bright and cheery new picture book, titled after the song. He goes straight for the humor here, acknowledging in many ways what a bizarre set of gifts these are, these partridges and turtle doves and geese a-laying and the like. Mind you, the gifts weren’t unusual in the late 1700s, when the song was published in England, but they are definitely something different for the ears of young children today.

Pizzoli brings us what we assume to be a parent and child—in the form of elephants. The two are decorating their Christmas tree when the “true love” (also an elephant) of the young one appears, complete with Santa hat, to deliver the goods. As soon as the partridge in the pear tree is placed on the carpet, the larger elephant frowns. On the next spread, you see that she (I’m picking a gender here and stickin’ with it) has brought out the watering can (someone’s gotta take care of that tree), but wait! Now two turtle doves are in the home. Her brow becomes increasingly furrowed.

On it goes, and most of the humor in the book is due to this long-suffering parent becoming more and more disgruntled over the growing number of ridiculous gifts. There is also humor in the details: The French hens are in berets; the swans a-swimming show up in bathing caps and with towels (not to mention a floatie shaped like the protagonist of Pizzoli’s Geisel-winning The Watermelon Seed); and the eight maids a-milking (mice) appear with cartons of milk. Expect giggles.

A crowded picture book spread can be problematic, but crowding is inherent to this busy rhyme. Pizzoli handles it well, even devoting a page to each number after we’ve counted up to twelve. By that point, though, the room is packed and mama elephant is in tears (can you blame her?). When the young elephant places the partridge on her head, however, it seems to lighten the mood, and everyone cheers.

Winter coziness is the name of the game in Linda Ashman’s William’s Winter Nap, illustrated by Chuck Groenink. I’ll pick up any picture book Ashman’s written—she’s consistently good, and she’s especially good at making picture books in rhyme work—and this one is a quiet tale, one that may get crowded out by the busier, louder holiday picture books on shelves.

It’s the story of young William, who lives in a house on a hill. He’s ready for bed, but baby, it’s cold outside, which drives in various woodland creatures. They come knocking on his door, and he doesn’t have the heart to turn them away. A chipmunk, a raccoon, and more—he welcomes them all into his warm bed, though it gets tighter and tighter. When a bear shows, he’s very nearly turned away, but they all manage to “climb in and curl up tight.” William, clearly guided by generosity and concern, climbs out of his own bed and into a rocking chair to make room.

Ashman’s meter and pacing are just right, and her words are paired well with Groenink’s snug multi-media illustrations. The dark, wintry outside is counterbalanced with the earth tones of William’s bedroom, lit warmly by a lantern. This one is an especially good choice for a one-on-one bedtime read with the youngest of listeners.

If you’re up for a book much different from the standard American fare, there’s Yoko Maruyama’s Little Santa, a story for which (according to the author-illustrator’s bio on the book’s jacket flap) she traveled to Scandinavia for inspiration. “I have a secret,” the book opens, as we quickly learn that the narrator’s father is the one, the only Santa Claus himself. (Oddly enough, Maruyama never lets readers see Santa’s eyes.) It is fun, the boy explains, to have Santa for a dad, but the one problem is that …

“Every Christmas Eve, when children around the world are home with their

families waiting for Santa, my dad and the reindeer fly off to deliver their

presents.  Every year I have to spend Christmas Eve alone.”

But when Santa falls and fractures his ankle, the boy is the only choice (the reindeer only respond to people in Santa’s family) for delivering presents.

This is a curious plot. Not surprisingly, the boy delivers all the presents, coming to a new appreciation of his father’s work. But, surprisingly, one “shabby house” is left after the boy has delivered all the goods. (This immediately brings to mind the title character of my favorite holiday picture book, John Burningham’s Harvey Slumfenburger’s Christmas Present.) It’s a sleeping girl, named Sara, who has left a note, expressing her wish for snow. “Yesterday in my dream,” the note explains, “I became a snow fairy and danced in the ballet.” When Santa shows up—on crutches, no less—to assist the boy and bring the snow by releasing a cloud he’s brought from the North Pole, he explains that the word “gift” has two meanings—present and talent. That girl, he adds, has a talent that will last her a lifetime.

This visit to Sara is a strange and sentimental diversion. Nevertheless, Santa is reunited with his son, making the boy’s wish come true. And Maruyama’s soft and textured illustrations are captivating. Many children will delight in this tale that takes a peek behind-the-scenes at Santa’s family life. “Like Santa, like son,” as it says on the book’s back cover.

Santa. Cozy winter sleep. Even partridges in pear trees. They all make for promising holiday reading with the children around your Christmas tree.

THE TWELVE DAYS OF CHRISTMAS. Copyright © 2017 by Greg Pizzoli. Illustration used by permission of the publisher, Disney-Hyperion, New York.