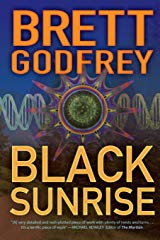 Brett Godfrey’s debut thriller, Black Sunrise, was 40 years in the making. The author was 19 years old when he first started the novel, and early versions were “pretty campy and pretty corny.” But some of the original characters survived decades of drafting and revision. “That’s 40 years of character development,” Godfrey jokes. The protracted process paid off: In its review, Kirkus Reviews praises Black Sunrise for “enthralling scenes of investigation” and “riveting backstories.”

Though it took Godfrey some time to complete this project, it was never for lack of interest. “I grew up reading fiction,” he says. “I fell in love with novels when I was 8. My parents were avid readers.” Godfrey still remembers the first grown-up book he read as a child—Love Story by Erich Segal. Those days of reading were full of wonder and discovery: “You vanish into a little private escape world,” he says. Godfrey recalls growing so attached to characters he considered them his friends. He hopes readers of Black Sunrise will feel some of that fellowship with his cast.

A longtime fan of thrillers, Godfrey has an encyclopedic knowledge of the genre. “There’s an ocean of novels about Tier 1 operators: Delta Force, Seal Team 6,” he says. He praises the work of Jack Carr and Stephen Hunter for their depictions of “lone-wolf characters.” But as much as he admires those books, Godfrey sought to claim his own territory as a writer.

“I wanted a series that would be a little different from the rest,” he says. His urge to be original prompted him to come up with the Brecht Group, a security contractor at the heart of Black Sunrise. “The Brecht Group is a one-of-a-kind outfit,” says Godfrey. “What makes it different from some private agencies is that it has way more active support from the U.S. government. The FBI, CIA, and NSA all owe it various debts.”

But Brecht operatives aren’t a bunch of pencil pushers. “It’s not just a question of forensic analysis or data gathering,” says Godfrey. “They’ve got guys who go out and actually pull triggers. They all have one thing in common: They’re all trained, and they’re all smart. The layering of disciplines and trainings can create the type of person who has abilities that go beyond the everyday.” It’s no wonder Godfrey values skill and training. He’s a trial lawyer in Denver, Colorado, and he’s also a former fighter pilot, a martial artist, a painter, and now a novelist.

The novel opens with a kidnapping. When Mark Jensen hears that his daughter and her friend have gone missing in Denver, he flies to Colorado to be closer to the investigation. But he quickly finds out that the Denver police will be of no help. Frustrated, Mark asks his father to connect him with Albert Brecht, one of his old associates who runs a private security company.

Brecht, eager to repay a debt he owes Mark’s father, agrees to take on the case. In the process of tracking down the kidnapped women, Brecht’s highly specialized operatives—including Roady Kenehan, the company’s most skilled agent—uncover far larger stakes. Arthur Beeman, the primary villain, has developed a potent biological weapon, “Black Sunrise,” which he plans to use in a deadly but small-scale experiment on the women he kidnapped. North Korean agents, however, have different plans for Beeman, the weapon, and the fate of the world.

The clock is ticking, and the good guys face long odds. “What’s the difference between a strong person and a weak person?” Godfrey asks, summarizing the theme of the book. “How do strong people react to adversity? They don’t give up, and they use their minds as their most powerful weapons.”

As is true of many riveting thrillers, the villains of Black Sunrise shine. While they all have their criminal merits, Arthur Beeman is the standout—a loquacious psychotic. When asked how he came up with Beeman and the rest of the cast of nasty characters, Godfrey again gives credit to others.

“I started to understand how important a good villain is by reading one book: Hannibal.” Godfrey realized his villains had to be interesting. “The world is full of trite villains,” he says. Beeman is certainly interesting, an unhinged ranter who spouts a pseudo-philosophical justification for murder:

Like his villain, Godfrey’s driven by big ideas. He wants his fiction to be educational. “One of the things I like about good fiction is I learn things,” he says. So how does he prevent exposition from bogging down his narrative? “By worrying about it,” he says. “I didn’t want to back away from educational narrative, but I didn’t want to bury the reader in it.” He proposes a couple rules: Keep it interesting; keep it relevant. And above all else, stick to the four ingredients that can spice up anything too bland: “Sex, gore, humor, and violence.”

Black Sunrise proves his fiction-writing chops, but Godfrey remains in awe of writers Daniel Silva, Ward Larsen, Marc Olden, Wilbur Smith, and C.J. Box. He says the names of his peers and mentors in a litany of gratitude. But as much as he enjoys the writing of others, he’s got his own work to tend to. The Brecht series will continue in 2020 with Convergence of Demons. Godfrey says the new book begins with the Brecht Group as a target. In other words, “Good guys come back, bad guys reemerge,” says Godfrey. What more could a reader ask for?