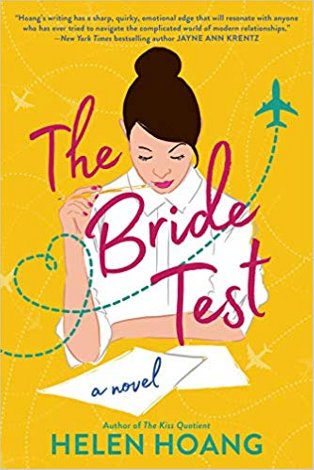 A quick public service announcement for readers who love romance:

Everyone should read THE BRIDE TEST by Helen Hoang—which received a Kirkus star—and also THE KISS QUOTIENT, her 2018 debut.

Khai Diep has no feelings. Well, he feels irritation when people move his things or contentment when ledgers balance down to the penny, but not big, important emotions—like grief. And love. He thinks he's defective. His family knows better—that his autism means he just processes emotions differently. When he steadfastly avoids relationships, his mother takes matters into her own hands and returns to Vietnam to find him the perfect bride.

As a mixed-race girl living in the slums of Ho Chi Minh City, Esme Tran has always felt out of place. When the opportunity arises to come to America and meet a potential husband, she can't turn it down, thinking this could be the break her family needs. Seducing Khai, however, doesn't go as planned. Esme's lessons in love seem to be working...but only on herself. She's hopelessly smitten with a man who's convinced he can never return her affection.

With Esme's time in the United States dwindling, Khai is forced to understand he's been wrong all along. And there's more than one way to love.

Hoang, who is on the spectrum herself, does a stunning job in both titles of making autism part of the conflict—usually by the characters thinking of themselves as having flaws, not being good enough, not being able to love the partners they want, etc., but also using the manifestations of the diagnosis to set up realistic bumps in the road—difficulties communicating, expressing emotion, reacting to things in ways that people who don’t live with autism might find difficult to understand or navigate.

(I did an interview with Hoang last year and swooned over THE KISS QUOTIENT; if you’re interested, you can find it here.)

Hoang’s genius is in gently making characters on the spectrum (and through them, the reader) understand that while they may be different in some ways, they are absolutely lovable, and loved. By friends, and family, and by the end of the book, their perfect partner.

Finding the perfect partner is complicated for anyone. It’s the emotional tug-of-war journeys to the HEA that bolsters the whole romance publishing industry.

However, finding the perfect partner when the main character is convinced they’re damaged in ways they can’t fix becomes more challenging and ultimately gratifying when the perfect partner is someone who loves, understands and appreciates them exactly as they are, helping them (and the audience) understand that they don’t need to be fixed. Just loved, understood and appreciated.

In THE BRIDE TEST, Esme’s character is intelligent and brave. She brings open-mindedness and open-heartedness with her on her journey to America, but she’s no pushover. She often stands up to Khai when he’s being unfair or confusing, and forces him to communicate—or at least explain—his choices, all while navigating a world that is completely new to her.

For his part, Khai is generally smart enough, socially and intellectually, to understand when he’s done something that bother Esme, even if he doesn’t know what that is. He has the poise, dignity and perseverance to try to gather information which allows him to process what happened better and more productively. He calls on his brother and his cousin (a cameo for Michael from THE KISS QUOTIENT) for help, and tries to make amends when he realizes he’s done something that hurts Esme, even if that wasn’t his intention.

Add in a few glimpses of other kinds of Other issues—immigration, class, feelings of unworthiness, both in Vietnam and in the U.S.—and other emotionally charged conflicts, as well as dollops of humor, an unexpected twist in the ending, internal dialogue showing Esme's and Khai's growing affection and love, and the confusion that happens when they’re unsure of themselves with each other, and you have another delightful, charming, and enlightening romance.

When a first book is as emotionally and professionally successful as THE KISS QUOTIENT, it’s easy to worry about the sophomore effort. So let me add my voice to the growing chorus of readers who love THE BRIDE TEST and find it a worthy, satisfying follow-up. Now all we can do is hope Hoang becomes a faster writer so we don’t have to wait another year for her next one!

(No pressure though, Helen—just keep writing great books and we’ll read them whenever they get here!)