In Expecting the Good: Inspiration from a Badass with a Big Heart, Brigitte Cutshall Talks about How Her Late Stepfather Helped to Heal Her Fractured Military Family 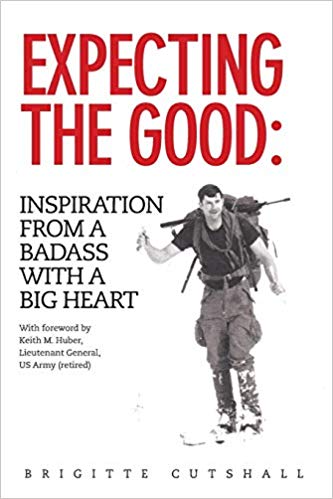 Brigitte Cutshall’s second book, Expecting the Good: Inspiration From a Badass With a Big Heart, was born at a wake. It’s a tribute to Jean-Luc Nash—her seemingly robust 64-year-old stepfather—who died suddenly and unexpectedly in 2016 of a heart attack while working out in his basement gym.

Nash was a West Point graduate and served in the U.S. Army Special Forces. He was Cutshall’s mother’s third husband; her first two served in Vietnam. As with many military families, Cutshall’s moved around the country. She was born in Kentucky, and the family lived near or on a succession of military bases, including Fort Benning in Georgia and Fort Bragg in North Carolina.

She and her siblings didn’t get to see their biological father much because of his deployments. Her parents had divorced when she was 4, and her mother remarried when she was 6. The second marriage ended in divorce a decade later. PTSD played a role in the breakups of both marriages, Cutshall says.

The author, by her own admission, was a 17-year-old with attitude when Nash married her mother in the early 1980s, but he gradually broke down her defenses, and she came to appreciate his stabilizing influence. “He was a good man,” she says. “The most consistent person in our family. He better connected us to our mother. He made her a better person.”

In the book, Cutshall writes, “Her exact words to me after his death were ‘I was jaded about life until I met Jean-Luc. He showed me that life was worth living.’ ”

As with many veterans, Jean-Luc did not talk about his battle experiences. “He was in the Grenada Invasion and first Gulf War; I didn’t know,” Cutshall says. She adds that she didn’t even know his and her mother’s 1981 meet-cute story, which she includes in the book. But after the funeral, his West Point classmates held a traditional “Benny’s Wake” for him, during which they shared personal, often funny stories.

“Meeting everybody he knew over the years was where I got the idea for the book,” the author says. “The stories were hilarious. On the way home, I said I had to put all this down. I sent out emails for more input. Everybody had nothing but good things to say. They said he was over the top, meaning he was not afraid to do anything.”

He was even unafraid to reach out to his rebellious stepdaughter. “He saw my attitude and said, ‘I can try to help her,’ ” she says. The turning point, she notes, was her high school graduation, for which all three of her fathers were in attendance. “I was mortified,” she says with a laugh. “It was embarrassing. But Nash took us all out for graduation dinner and paid for it all. He was very generous. He offered to buy me a car, and he taught me how to drive a stick shift. I burned out the transmission, but he was really patient. Later, he paid for my first two years of college.”

One of the most important lessons Jean-Luc taught her, she shares, was resilience. He would say that “bad things will happen, but you just have to push through it,” she relates. “That’s what military families have to do every day.”

Bad things did happen to Cutshall later in life. She was diagnosed with breast cancer for the first time at 41 and with a brain tumor three years later. A second breast-cancer diagnosis came five years after that. “I had my double-mastectomy on my 49th birthday,” she states. “I view that as a new start in life.” She’s now 54.

Cutshall’s son encouraged her to start a blog, which, she says, proved therapeutic. It expanded to a podcast, “Real Things Living,” and a 2015 book, Real Things: 6 Ways To Embrace Life. She had always wanted to be a writer, she says. Jean-Luc was big on setting goals, which inspired her to get jobs in publishing, which allowed her to pay for the remainder of college. She went on to become the founder of Atlanta-based Gemini Media, which offers “self-care tips for an inspirational life,” according to its website. She’s also an inspirational speaker.

Nash’s funeral was a revelation of his full measure, she says, and in her book, she wanted to celebrate his life. Along with the reminiscences of his military comrades, it includes family photos and personal memoirs, highlighting life lessons that he taught her.

At one point in the book, she reflects on Nash’s style as a silent leader. “Like everyone, I’ve made mistakes and some ‘interesting’ decisions,” she writes, “yet Jean-Luc didn’t yell or scorn me for it. He would calmly ask, ‘what did you learn’ and ‘what could be different next time?’ ”

Contributions by his fellow veterans etch a vivid portrait of a warrior and a character. “Jean-Luc was eternally optimistic,” notes Stan Moore, a retired U.S. Army lieutenant colonel. “He was also completely pro-active. If anyone mentioned a new project or adventure, he’d say, ‘Let’s go do it!’ ”

It all adds up, Kirkus Reviews notes, to an “intensely personal, anecdotal account [that] transcends the personal by relating Jean-Luc’s transformational lessons.” And although the book will be treasured by those who knew Nash, it’s also a testament to author James Joyce’s maxim that “in the particular is contained the universal.” Military families will identify with the challenges and sacrifices Cutshall’s family faced as well as their setbacks and triumphs.

Cutshall herself married a military man, whom she met at Campbell University in North Carolina. He was enlisted in the 82nd Airborne, and, in fact, knew Nash before she did. They’ve been married 31 years and have two children.

The author says that she hopes that reading her book will encourage children to ask their veteran parents to share their experiences. In it, she acknowledges that writing it helped her to “better understand the impact being part of the military can have on people”: They can positively affect others through their leadership by expecting the good in others.” She also notes:

Over the years, my worldview of men changed after witnessing how Jean-Luc treated our mother. He treated her with respect and encouraged her to pursue her dreams. “Don’t let any excuses hold you back or get in the way” is what he always told her. He did the same with all of us.

Another vital lesson that Cutshall hopes readers take from the book—and one that served her well in dealing with her health crises—is “to be present in the moment,” she says. “Jean-Luc taught us to not make things so complicated. He always said to appreciate life.”