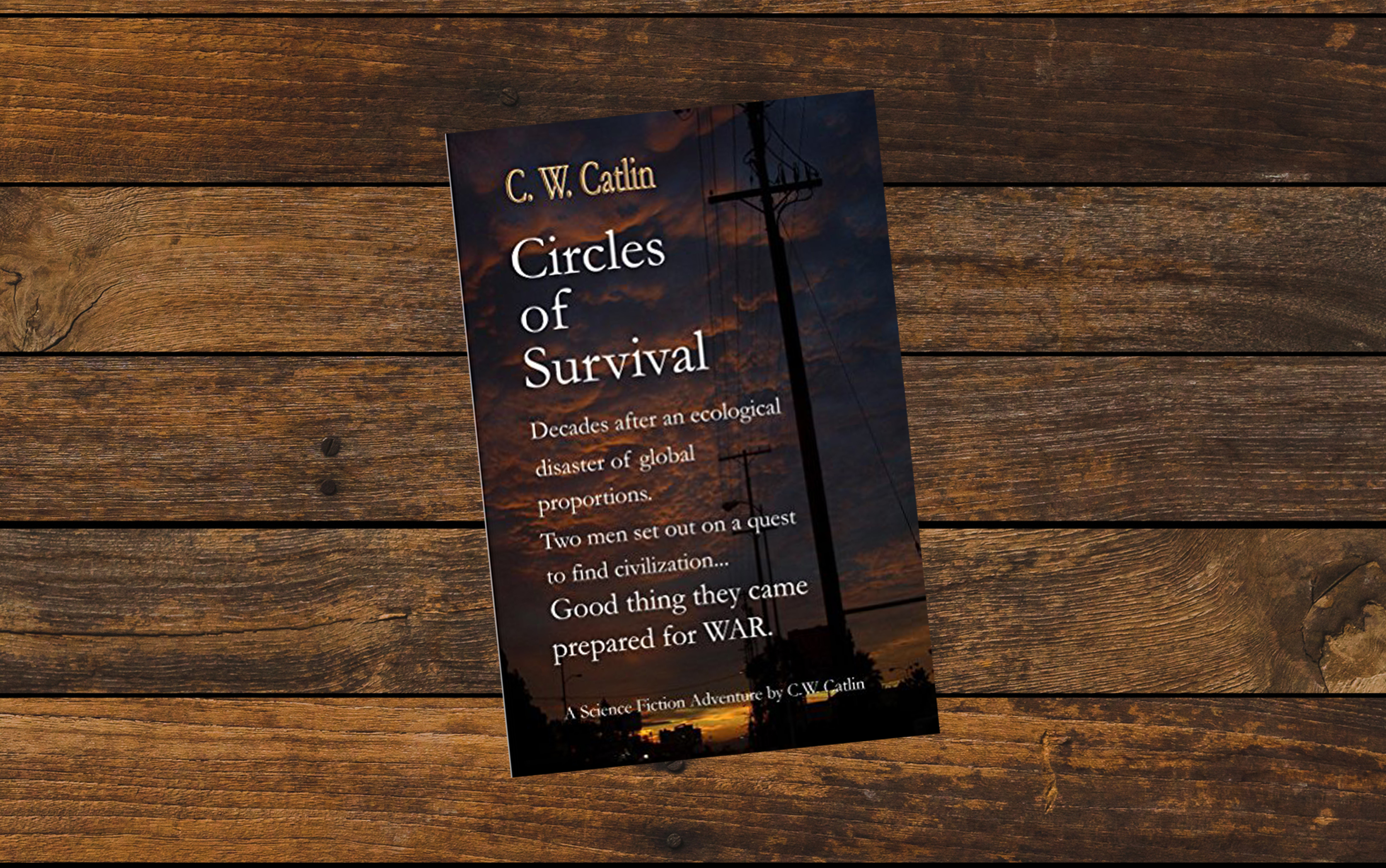 C.W. Catlin always has a story to tell. And given that he’s been fascinated with SF since the age of 10, it’s no surprise that his first novel, Circles of Survival, is an intense, energetic romp of two smart-talkin’ survivalist friends making their way through a cutthroat post-apocalyptic world with only their wits, their knowledge, and a whole lotta firepower.

“I mean, the idea has always been in my head to write a story like that since I was a young man,” says Catlin, now retired and living in Arizona’s remote central highlands. Back then, he would jot down story ideas and chapters in black journals (“the hardbound ones with all those beautiful blank pages”), including the first chapter of what would eventually become Circles of Survival. But it would be years before he began writing the book.

“This is the funny part. I forgot where [the original version of the story] was,” he says, starting to laugh. “I happened to be clearing out boxes—which I am doing again, it’s always exciting—and I found it, and I went, ‘Oh, wow.’ But I had already started to rewrite the story when I found the original writing that I did. With a pencil.”

Catlin’s love for SF and technology (not to mention cars) sings throughout the book in the two main characters, whom Kirkus Reviews refers to as “a couple of likable and smart bromantic leads—think Butch and Sundance with RPGs, battleground strategy, and combat software moxie.” And that friendship is the structure for most of that book, complete with a meet-cute. Or rather the SF-action version of it, where two hardened men meet while taking down some baddies with a lobbed grenade, establishing trust and watching each other’s backs as an already-battered humanity fights for survival.

Even from the outset of the book, readers get the sense that, in this new world, friendship is a rare and precious commodity:

Wolf realized that his respect for his new friend had increased somewhat. The very idea of offering help to someone in need, especially someone you had no affiliation with at all, was not common in the world they lived in.

Compassion had fallen by the wayside, pushed aside by the need to survive, or the fear of catching the plague, or just simple callousness. Many of the ones who lived through the End were bitter and felt that their lives had been ripped away from them.

They thought that [the] world owed them something. Wolf knew without a doubt that they were wrong. Maybe they should instead be very glad to be alive at all. Despite what had happened…there comes a time when you just have to put it behind you and get on with it.

“I’ve been told that the storyline is basically Mad Max with a heart,” says Catlin, who admits that the basis of the book is simply “two friends trying to survive.” But he maintains that for human beings, our social behaviors are what save us in the long run. “Humans are gonna be humans. We’re gonna look for friendship…for companionship. None of that’s gonna end when the whole world goes to hell in a handbasket….You’re gonna develop friends, not cold alliances that allow you to survive another day.”

It is, in fact, the core relationship between narrators Al and Wolf that not only drives the story forward, but also serves as the reader’s guide for the end of the world, whether Al and Wolf are building and modifying “the rig” (an armored vehicle with more weaponry and tech than a small invading army would need), drinking 2-decades-old coffee, or mouthing off against an enemy that would happily cook them for breakfast. What you might not realize in reading Circles of Survival, however, is that Al and Wolf’s relationship is actually based on a real one.

At 16, Catlin was sent out in an “unforgiving” world to fend for himself, scrambling to find a place to live as well as balancing two jobs and school. It was then that he found something he never expected to find: a friend. “He actually started out as an adversary back when I first hit the streets,” says Catlin. “And we ended up joining forces to get through a bad situation. And he became one of the best friends that I’d ever had….We used to joke with each other continuously. So you could call it a ‘bromance’ if you want, but…we understood where [the] other was coming from; we got through the fact that, originally, I wanted to punch his lights out—on several occasions.”

In fact, once you get to talk to him, you begin to realize that many of Catlin’s life experiences echo throughout the book, whether in the development of the characters, in his technical details about computers and electronics, or even in story events inspired by real ones from his youth. After all, Catlin refers to himself as a survivor who knows what’s it like to live on the edges of secure environments, and not all of those experiences were good.

“In my life, I’ve witnessed good people and I’ve witnessed bad people,” he says. “There’s always a bad guy. And they’ll do anything, take anything, destroy anything. It’s what they do. And it just seems that they’re inherently that way. And then there’re people who know right from wrong and try to walk that path—even though it’s a pretty convoluted path.”

In Circles of Survival, much of that tension between good and bad—and sometimes even between good and the unknown—creates moments of reflection about not only humanity’s ability to survive, but also our ability to remain human. And it’s that tension that keeps Catlin’s book from being just another cautionary tale. Instead, Circles of Survival becomes a message of hope.

“I wanted to instill in people the idea that you can stride forward confidently as opposed to running in fear, do you know what I mean?” Catlin says. “Here you have two survivors who managed to get through all of the disasters and then live…for the next 20 years….There’s no desperation there. They know they can survive. They know how to avoid the issues or the dangers that are gonna come their way. And I think that applies to people today.”