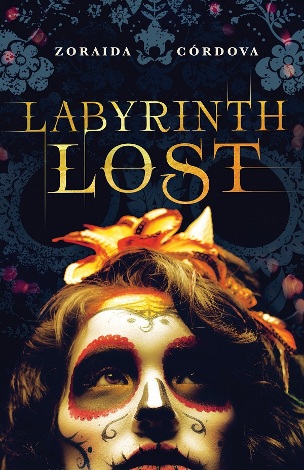 Yes, it's a Big Face – but I kind of love it?! The model is looking up and around – very Dorothy in Oz – and, of course, her calaveras makeup looks fab. My only concern is what the rest of the series will look like, because Nicole Komasinski's cover design has set my expectations HIGH.

Alex Mortiz hates magic. Or, rather, she's never had a good experience with it. And she's not about to start now, as she performs a spell to get rid of her power at her Deathday celebration (a rite of passage for brujas and brujos)... which backfires SPECTACULARLY, with her entire family disappearing before her eyes. To get them back, Alex must travel to Los Lagos, a strange and dangerous realm in which magic reigns supreme – and hers attracts the attention of its most sinister and powerful creature.

Alex is immensely relatable (albeit a Special), but what makes her stand out is her moral compass. She's not perfect by any means, but she owns up to her mistakes, and she tries her damnedest to make up for them. Even with her magical abilities, her true strength lies in her admirable kindness and compassion. Basically, Alex is #LifeGoals. (Except I'd want the magic, too, because GREEDY. Such a Slytherpuff.)

As a mercenary brujo-for-hire, Nova accompanies Alex to Los Lagos, trading barbs and giving nicknames. But the further into their journey they go, the more Alex's feelings make themselves known.

Though the story packs a lot of dialogue and exposition, they never slow or weigh it down. Well-paced and expertly deployed, the writing pulled me in and had me hooked from the very beginning. This book also effortlessly incorporates Spanish text that works for readers of all familiarity levels (i.e., without resorting to insta-translation, but still decipherable with zero fluency). Plus, major pants for breathing new life into a tired phrase with "resting witch face".

Drawing inspiration from Latin American cultures and religions, as well as more popularized Greek lore, Córdova has created an elaborate mythology to explore.* My favorite aspect is how magic always has a price, a consequence – that the limit does exist. Also, this book might have one of my favorite fantasy maps ever. (The skeleton river puts it over the top, obvs.)

Despite their brief time together prior to their separation, there's still a strong sense of sisterhood between the Mortiz girls. Which is especially promising for the two planned follow-ups that will focus on each of Alex's sisters.

(My initial instinct was to use a photo from Practical Magic, because of the sister who resists magic. But a similarly named spell book, the theme of using magic for personal gain, and Córdova herself making this reference meant it absolutely had to be Charmed instead. Long live the Power of Three!)

Early into Alex's rescue mission, I realized that her fantastical encounters in Los Lagos totally reminded me of my homie (har) Odysseus' literally epic adventures.

If only this was the year 2000 and I could cast Michelle Rodriguez and Adam Rodriguez. But since it isn't...

Salma Hayek as the Devourer

Relationship Status: Can I Get an Encore?

The greatest dates always leave you wanting more. And, Book: I WANT MORE. Our time together was simply magical, so let's cut the brujaja and spell out our future. (So many groans, I know.) I'm not sure where you're going, but, to quote the theme song of an FYA fave show, where you lead, I will follow.