Camping Out with Vera Brosgol 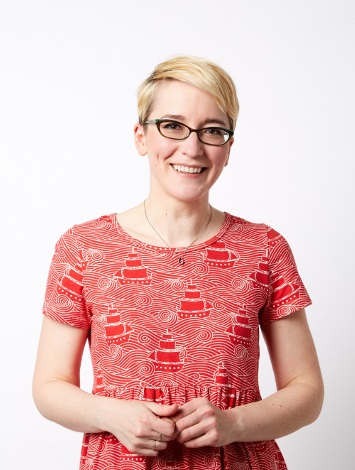 I interrupted author-illustrator Vera Brosgol’s book tour to have a conversation with her about her newest book, a graphic novel for middle-aged readers. Be Prepared is the semi-autobiographical tale — “This book is a true story. And also made up,” Brosgol writes in a closing author’s note — about a childhood summer camp experience. The young Vera is thrilled to finally head to camp, just like all her suburban classmates do. She eagerly attends a Russian Orthodox summer camp and figures it’s just the place where she’ll fit in. But it is harder to adjust than she expects. It turns out that, no matter where you are or where you’re from at this age, there are the challenges of friendship, self-acceptance, and everyday courage to navigate.

Brosgol follows up her 2017 Caldecott Honor with this story that is funny, honest, and vulnerable, and we talked about it via email.

Jules: Hi, Vera! Thanks for chatting with me about your new graphic novel. I know this seems like the kind of thing I should ask last, but the book ends on a big cliff-hanger (where the protagonist is told by her mother that they’re moving to London). I'm dying to know: Is there a sequel in the works?

Vera: Ha ha. I knew this would happen! The idea of that cliffhanger ending is to show that, just when you feel like you get your feet under you, life throws something new and terrible in your face. It also reads exactly like an author setting up a sequel. Whoops.

I'm not currently planning one, because what came next (moving to England) was messy and difficult and doesn't have a tidy narrative thread, like summer camp did. But if I ever think of a good one, I'm not against the idea.

I want to back up a bit and congratulate you on your 2017 Caldecott Honor for Leave Me Alone! I assume that, when you got that happy news, you were working on Be Prepared, or perhaps already done. What did it mean to get Caldecott recognition, and do you have more picture books in you?

Vera: Thank you! Last January I was inking Be Prepared. The deadline was March, so my colorist Alec and I had our noses to the grindstone. I completely forgot ALA Midwinter was taking place (oops). I hadn't even let myself fantasize about receiving an Honor for my debut picture book, so suffice it to say that I was floored. (And asleep. They call you at 4 a.m.!) I love the medium and feel like I have so much to learn; the award was a real encouragement to keep going. I definitely have more picture books in me. I just handed in my next one last week.

Jules: That’s good news. I look forward to that.

When’d you know you wanted to tell this childhood story in Be Prepared? Is this something you’ve been thinking about doing for a while?

Vera: I came up with the idea about three years ago. Honestly, I was resistant to doing a childhood memoir. I feel like there are a lot of them these days — and good ones. The world didn't need one from me. My publisher asked me to at least think about it, and I did, crankily. Crank crank crank. But as soon as the camp angle occurred to me, all my crankiness went out the window. I knew I could make a funny book that would be a blast to draw and be different from what's out there. I'm always telling people about the outhouse. The outhouse needed to be immortalized!

Jules: Yes, no one ever needs to see a spider that big when in an outhouse. Or, really, anywhere. Also, speaking of, I’d like to give a high-five to Nalini Jonesfor writing this in the New York Times in April about the book’s protagonist: “Her sincerity is a beacon in the darkest latrine.”

Vera: Yes, that is quite a pull quote. I'm very grateful to Nalini for such a positive and colorful review.

Jules: Tell me about including the “fancy historical dolls” everyone plays with in the book. The name Complicity made me laugh out loud, as well as the chamber pot accessory.

Vera: Oh man, I had it bad for those fancy historical dolls. All my friends had one, and I would pore over the catalogs while over at their houses. (I never got to touch one.) So, I have mixed feelings towards those dolls — ferocious desire combined with some class resentment. Now that I'm a grown-up (and have actually done some illustration for American Girl magazine), I am sorely tempted to buy a Samantha doll on eBay as proof that I've made it. But I'm also 33, so maybe not.

Jules: I’m impressed by this book’s pacing. I know you’ve done a graphic novel before, but it wasn’t semi-autobiographical. Is it daunting at first to think about which stories to include and how to pace such a sprawling story (though, certainly, capturing one summer is different than covering one’s whole life)?

Vera: It wasn't too bad! The fixed summer-length really helped, as did knowing what concepts I was trying to address (being in and out, suffering, etc.). There was only a month of camp to work with, so I printed out a calendar and marked what was happening each day (which days were Sundays, which means I could have a church scene, etc.). I'm also a big outliner, so I had all the story beats ("big hike," "maxi pad scene," etc.) on Post-its where I could see them, move them around, throw them away. Things aren't daunting once you break them into little pieces.

Jules: That strikes me as such good advice in general in life — not just when it comes to writing.

I've two final questions for you: I need something new to read. What's the last best thing you've read, whether children's lit or not? Also, what's next for you, other than the upcoming picture book?

Vera: The last best thing I read — well, I'm not quite done with it yet, but Autobiography of a Face by Lucy Grealy is so, so good. It's a memoir about the childhood cancer that took half of her jaw and how it affected the rest of her life. I recently read Ann Patchett's Truth and Beauty about her friendship with Lucy, and these two books together are so moving and beautiful. Appearance and self-love are the themes for my next graphic novel, which is what I'm working on besides picture books. It's also got mermaids.

Jules: Oh, I love that Patchett book. I read that years ago (and Ann’s Bel Canto is one of my very favorite novels). But I have not read Grealy's memoir, so I will have to look for that. Thanks for the recommendation — and for the news that you're working on another graphic novel.

AAAAND ... thank you for talking to me about your book, especially in the midst of a book tour.

Vera: Thanks so much, Julie! This was a pleasure.