Can Anybody Find Me Somebody to Love? 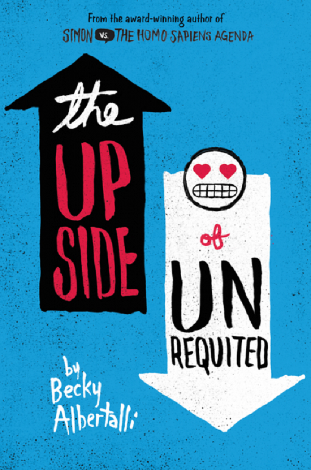 BOOK REPORT for The Upside of Unrequited by Becky Albertalli

Simple but cute! The color's fab, and Molly's love of emoji is front and (almost) center. I'm also super into an author's covers all having a similar aesthetic, so I love how it follows the style of Simon vs. the Homo Sapiens Agenda.

While this book can be read as a standalone, it contains appearances and mentions of characters from Simon, so you should consider reading Simon first if you haven't already.

At seventeen, Molly Peskin-Suso has already had 26 crushes... and absolutely zero kisses. Which is what happens when you fall as deeply and frequently as Molly does without doing anything about it. Because fat girls like her not only risk rejection, but cruelty, too. So Molly keeps her heart guarded, crushing away in secret instead.

Her twin, Cassie, on the other hand, doesn't have that problem. Aside from falling head over heels, anyway, because the cynical Cassie is totally gaga for her new girlfriend, Mina.

And whaddayaknow – Mina has a crushworthy hipster BFF, Will. But then there's Molly's coworker, Reid: geeky, fantasy-loving Reid. Suddenly, the girl with 26 unrequited crushes has two prospects on the horizon – and they might even like her back?

No offense to your actual twin, Molly, but you and I are the ones who are two peas in a pod. I related SO HARD to your caps-y nature, your propensity to overanalyze, and your awareness of your own a-hole tendencies, because SAME, GIRL, SAME. It's also endearing how excited you are to meet another Jewish person in the wild, because omg that's like the joy of every Canadian and/or hockey fan outside of Canada meeting one of their own.

And as a fellow high school wallflower, I wish I could say that you'll grow out of falling in like with everyone you meet, but HA HA NO? So let's commiserate over feeling unlovable. Or we can bond over better hobbies of yours like crafting or Pinteresting, whichevs.

Um, did I become a botanical garden without knowing it? 'Cause I've got ALL THESE BUTTERFLIES UP IN HERE. Seriously, Becky Albertalli is quickly becoming a master of the irrepressible grins. She's also pretty good at making two main love interests seem non-triangular – or, at least, not in the way that's gotten a bad rap. (I mean, who among us hasn't needed a little time to figure out what – or whom – we want?)

One of the great things about the diversity in Upside is its awareness of sexual and gender identities beyond those of its characters'. But it's not so much a breadcrumb than it is an acknowledgement of people all around us – the existence of the whole entire rainbow elsewhere and everywhere.

And Upside's normalizing efforts don't end there; it treats mental health and interracial families as just parts of life, as opposed to Big Flippin' Deals. There's also way more vadge talk than I've ever encountered in YA. (Hooray, vadge talk!)

Still, there's something that even Upside can't normalize. It's set shortly after Simon (i.e., in 2015), so it's a little strange to go back into the recent past when optimism had not yet left our hearts. But I digress.

Once inseparable, twins Molly and Cassie are starting to lead their own separate lives, with all the complications to their relationship that go along with doing so. Luckily, they can always count on their moms, Nadine and Patty, for love and support. (And OK, baby Xavier, too!)

Their extended family, however, is more of a mixed bag; sure, they have an awesome cousin in Abby – yes, that Abby – but then they have a homophobic aunt here, a fat-shaming and slightly racist grandma there... Like I said: mixed bag. Although, the emphasis on family in Becky Albertalli's books basically makes her the Vin Diesel of YA, right?

Of course, Molly isn't only a fat girl, but she is a fat girl.* And her insecurities over her size are most pronounced when very helpful humans remind her of it.

I mean, I know I’m fat. It’s not a secret. [...]
So, I should be used to it. Still, it always throws me a little bit when people say stuff about my body. I guess I want to believe no one notices I’m fat. Or that I’m somehow pretty and fat all at once, like a Torrid model. I don’t know.

Being fat shouldn't matter, but that's not the world that we or Molly lives in. Which is how the perception of others – and even dreading of it – affects her life in ways that jerkface opinions really have no right to.

*Being so cavalier with the term still feels weird, despite my logical brain knowing that fat does not have to be an insult. The stigma runs deep, y'all.

Molly makes delish edible cookie dough served with ice cream (OMG GENIUS), but Reid has a Simon Spier-level obsession with Cadbury Mini Eggs. Here's hoping that, just like how each Shonda Rhimes heroine has a booze of choice, each Simon-verse book will continue to pay homage to a delectable snack.

Albertalli understands the importance of conveying how real teens** communicate, although translating a visual medium into text isn't easy. Part of the appeal of emoji is not needing to use, y'know, words, but incorporating them certainly adds to Upside's authenticity. (The only way to be more realistic is probably for the characters to express themselves with GIFs as well.)

**Or just people, since I am an Old and pictured above is obvi my own fave emoji.

The ages of my teen cast are a good 5 to 15 years off, but that's why this isn't called reality casting, OK?

I know this is a deeply unoriginal pick, but I wholeheartedly loved her in Hairspray.

Name association's partly to blame, since she once played a Cassie (although the less said about it, the better), but I only pictured Britt for this role.

Cameron Monaghan as Will

Just look at that photo and tell me he's not perfect as a redheaded hipster heartthrob. (Or, you can try, but I WILL NOT HEAR IT.)

I went through SO many iterations of almost-but-not-quite options (e.g., Everwood Chris Pratt with early Parks and Rec physique; a young, non-garbage Blake Shelton), but the closest approximation that I could come up with is a young Seth with dimples.

Yes, Gabrielle Union is old enough to play the mother of teenagers, and omgggg didn't the '90s JUST happen, though?!?

UGH GOOP, I know, but her Goopiness makes it easy to forget that she can be a lot of fun.

When it comes to friendship, is there anything more exhilarating than discovering how much you have in common with a new friend? Especially when it's to the point of, like, freakish compatibility and HOW HAVE WE NOT MET BEFORE? But the upside is that it's here now, and its love definitely wouldn't be unrequited.

The Upside of Unrequited is available now.