Can We Try That? 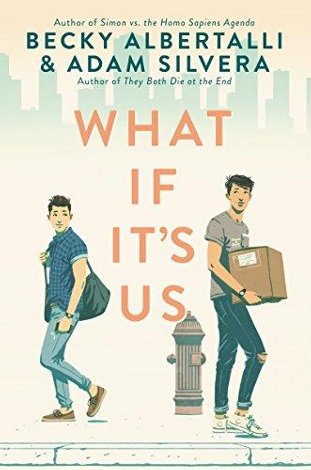 Cover Story: What If This Is ADORBS

When you see this cover, don't you want to just love it? Jeff Östberg's artwork is basically perfection. Ben is extremely on point with his Dream & Bean shirt and the cardboard box, although I kind of wish that Arthur was wearing the much-discussed hot dog tie. (The hot dog tie is important. As are all hot dog ties.) His half-tucked, half-untucked shirt, however, would solve the stalemate between his parents (as well as win the approval of Tan France).

Have you ever had a random encounter that would make such a good meet-cute? If you didn't go your separate ways forever, anyway. But Arthur and Ben just keep circling back to their chance meeting: what if this is someone that should be in my life? Or maybe they just met another stranger among the millions in New York that they'll never cross paths with again. But... what if they do find their way back to each other?

In town from Georgia for the summer, Arthur is #LivingHisBestLife. At least on social media; the reality of interning at his mom's law office and having no friends is not quite as glamorous as his wildest Broadway dreams. But Arthur keeps the hope alive anyway that the universe will provide—and when it does, he would have absolutely no chill. Arthur is the antithesis of chill; his style is more earnest and sweet. Such a pure Hufflepuff!

The real Potterhead and total bookworm, though, is actually Ben, so obviously I loved him, too. He's even writing his own wizard fantasy book that he incorporates his family and friends into, so this friendship comes with literary immortalization. But Ben's still hurting from the recent breakup from his first boyfriend—whom he still has to see every single day in summer school—so I guess I'll understand if writing me into his story isn't his top priority. (FOR NOW.)

We've all had them, right? Coffee shop crushes that barely last as long as your drink. But when you're gay and want to pursue something more than a fantasy, there's the added difficulty of figuring out if that cute guy would even be romantically interested in boys. Once Arthur and Ben clear that hurdle, though—and many, many others just to find each other again—they are THE CUTEST. And also endearingly awkward, in the best possible way that a teenage love story should be.

Talky Talk: He Said, He Said

The collaborative effort between Becky Albertalli and Adam Silvera is seamless, with their writing styles for Arthur and Ben being as perfect complements as they themselves are as author besties. The result is unflinching emotional honesty, with plenty of well-deployed humor to keep the story from getting too heavy. And there might be some shout-outs to their previous work, too. (I at least caught a few nods that had to be to Simon vs./Love Simon.)

There's a reason why this is such a mainstay on Craigslist: what if? What if one small action could change everything? How many life-altering decisions do we make or pass up without even knowing it? The speculation is endlessly tantalizing.

While their families may differ in race, religion, and socioeconomic status, Arthur and Ben both have loving and supportive parents with whom they feel comfortable sharing their latest crushes and devastating heartaches.

Arthur's missing his BFFs back in Georgia big time. He and Jessie are as tight as ever, although Ethan's been avoiding any one-on-one interaction ever since Arthur came out. And that's too big of a coincidence to ignore.

Ben's straight bro best friend, Dylan, on the other hand, might be a little too familiar (in a lovingly obnoxious way). But their duo used to be a quartet, back when they were both dating someone in their former squad. So now not only are they single, but they can't be friends with their best friend's ex, either.

Even in a diverse and progressive place like New York City, buttfaces are going to be buttfaces. Overt bigotry is easy to condemn, but woke folks can make mistakes, too. (The key difference being whether someone chooses to learn from their experience and do better, or just continue being a horrible person.)

Relationship Status: What If I Heart-Eyes This

Given its authors (one of whom is among my very faves), I'm not surprised to be so charmed by this book. But it, like, affected me by managing to hit super close to home. As much as my cold, cynical heart wanted to resist, I couldn't help giving into its intoxicating allure of possibility—no ifs or buts about it.

What If It's Us is available now.