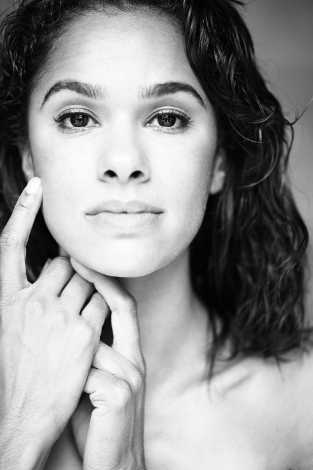 In the Author’s Note of her new picture book, Firebird, ballet dancer Misty Copeland notes that when she read ballet books as a child, she didn’t see herself. “I saw an image of what a ballerina should be, and she wasn’t me, brown faced.” Firebird is her attempt to change that, to give children one more ballet book featuring people of color. There simply aren’t many of these books on shelves.

She also notes that another African-American ballerina, Raven Wilkinson, mentored her when she expressed an interest in dance at the age of 13 (considered late for ballet). “Now it is my turn to lead others,” she writes. In Firebird, Misty—the second African-American soloist in the history of the American Ballet Theatre—writes of a young, dark-skinned girl who lacks the confidence to dance, only to meet an older dancer who takes her under her wing. Award-winning illustrator Christopher Myers brings to this story his signature paint and collage illustrations, vivid and pulsing with movement.

The idea for the book, Misty tells me, was all Chris’, though writing a children’s book was something she had longed to do. “After he saw the relationship I have with [Raven],” she says, “as well as my relationship with my own mentees, that's when we decided this would be a powerful story to tell.”

For Chris’ part, he has always been interested in dance. “When I was a child learning to draw the body,” he explains, “I spent hours drawing dancers from photo books of Alvin Ailey’s company. As an adult, I still go to the theatre quite often, although I tend to like more modern and contemporary choreographers, like Pina Bausch and Ralph Lemon. (I’d love to do a book one day about Pina.) But in doing work for this book, I really had to return to the roots of all that dance I usually go see. Ballet is so rigorous and formally precise. I spent a lot of time watching videos of ballet and going to see Misty dance specifically, because as precise as ballet is, the specificity of her art was most important to me. I wanted not just to capture the excitement of ballet, but the thrill of watching Misty perform those precision moves, the artistry that she brings to it.”

It’s a collaboration Misty treasures. “Chris is one of the most creative and talented people I know. He's open and vulnerable, constantly looking for self-growth and improvement. His artwork is a reflection of that.” Chris did some sketches during one of his first visits to Misty’s performances, and Misty notes, “they were such an honest portrayal of me.”

Deciding on a color palette for Misty’s text was a challenge Chris relished. “Contemporary ballet,” he tells me, “is a riot of colors and materials. The costumes, the props, and the sets explode with hues and textures. For the visual artist, there’s so much to sink one’s teeth into, which is why artists from Degas, Picasso, Rauschenberg, and Leonardo Drew have worked with dancers. I wanted to reflect the riot of color and set that riotous energy in contrast to the control and careful attention to detail that is at the heart of ballet. Collage allowed me to almost choreograph across the pages, as if the book itself were a stage. I could bring in the many colors and textures, while paying close attention to the dancers’ positions, their attitudes, and postures.”

Though right now he has “a thousand projects in the works”—coming next for him is My Pen, a book about the power of drawing—Chris adds that he’d love to work on more books about dance, “perhaps the Pina Bausch book, or a book about Raven Wilkinson, a petite giant of a woman Misty introduced me to, who danced with the Ballets Russes years ago.” In fact, it is to Raven that Firebird is dedicated. Perhaps, Chris notes, he and Misty should get lunch soon and discuss that collaboration.

But he might have to wait a while, since Misty’s got a lot on her calendar too. “I'm so deep in and committed to my career right now,” she tells me. “I have a Fall season approaching with American Ballet Theatre at the Koch Theatre, our Nutcracker season at Brooklyn Academy of Music, where I will debut the lead role of Clara, as well as the Spring season at the Metropolitan Opera House, where the company will celebrate its 75th anniversary. It will be an exciting season for me. I recently debuted the role of Odette/Odile in Swan Lake in Australia, and I'm hoping I will make my New York debut in the Spring. I'm continuing my work with the Boys and Girls Club as an ambassador for the Youth of the Year program. I'm just starting work as a member of the President’s Health and Fitness Council. And my Under Armour ad has done incredible things to show the beauty and work that goes into becoming a ballerina.”

If Chris can get that lunch date on Misty’s impressive schedule, fans of Firebird will be in for a treat.