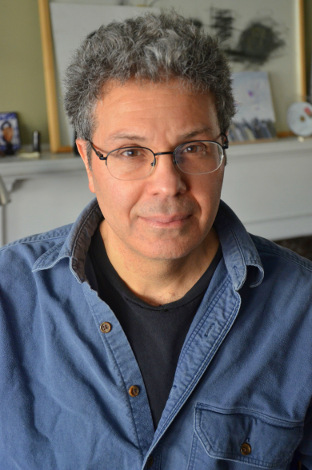 For Canadian author Cary Fagan, there’s no format as freeing as a picture book.

“When you write a picture book, you can theoretically do anything,” says Fagan, author of A Cage Went in Search of a Bird. “You can write about a cage. You can write a book that has no humans in it. It can be very funny, terribly sad, profound, poetic, or crude. The scope is so wide and, to me, that’s a very exciting thing.”

Fagan, of Toronto, has a storied career: 40 books in 27 years—fiction and nonfiction, for children as well as adults—translated into nine languages. They include Valentine’s Fall and A Bird’s Eye and, for children, Danny, Who Fell in a Hole; I Wish I Could Draw; Oy, Feh, So? and Mr. Zinger’s Hat.

“It’s such a brilliant line—it says so much,” says Fagan, who found it, unattributed, in a poem by Robert Hass. “In a way, the line stands on its own, it doesn’t in itself require more, but I felt there was a story to be told—a story I wanted to tell—that happened very quickly once I started thinking about it.”

In A Cage Went in Search of a Bird, a forlorn cage lives in an attic with fellow forgotten possessions: suitcases, books, a guitar, a lamp. Feeling “useless and unwanted,” questioning its existence and purpose, the cage makes a break for it.

The cage rocked its way over to the window. With great effort, it got up onto the ledge.

“Don’t do it!” cried the suitcase.

“It’s a long way down!” twanged the guitar.

“I can stay here no longer,” said the cage. “Why, I was made to keep a bird, and to hang up in a nice house, and to bring pleasure. Goodbye, my friends!”

The cage plunges in pursuit of its perfect match: a bird for whom it may provide shelter and solace. Alas, many of the birds it meets aren’t matches. They prize their freedom above the comfort and convenience it offers.

“I felt the poignancy of the quest of the cage alongside the resistance of the birds that want to be free,” Fagan says. “They are these needs that do not necessarily come together. That created [a conflict] I thought worth exploring in a picture book, in a way that could be accessible to kids.

“I believe in being very respectful to the audience of children,” he says, “and that means providing stories they’re ready to think about. They’re very capable, extremely bright humans who like to think about new ideas.”

A Cage Went in Search of a Bird marks Fagan’s first collaboration with Erfanian, who brings a distinctive sensibility to depicting the ornate cage and diverse birds in acrylic and oil pastels.

“To my eye, [her illustrations] are definitely different from the North American illustrations that I’m used to,” says Fagan, who’s thrilled with the result. “I like that because, here I am, Canadian-Jewish writer, taking this Czech-Jewish writer, who wrote in German, making a story out of his work, and having an Iranian-Canadian make the pictures. I like that idea of combining these different cultures and thought it would benefit this rather unusual story.”

Megan Labrise writes “Field Notes” and features for Kirkus Reviews and is the co-host of the Kirkus podcast, Fully Booked. Photo above of Banafsheh Erfanian is by Dana Mansouri.